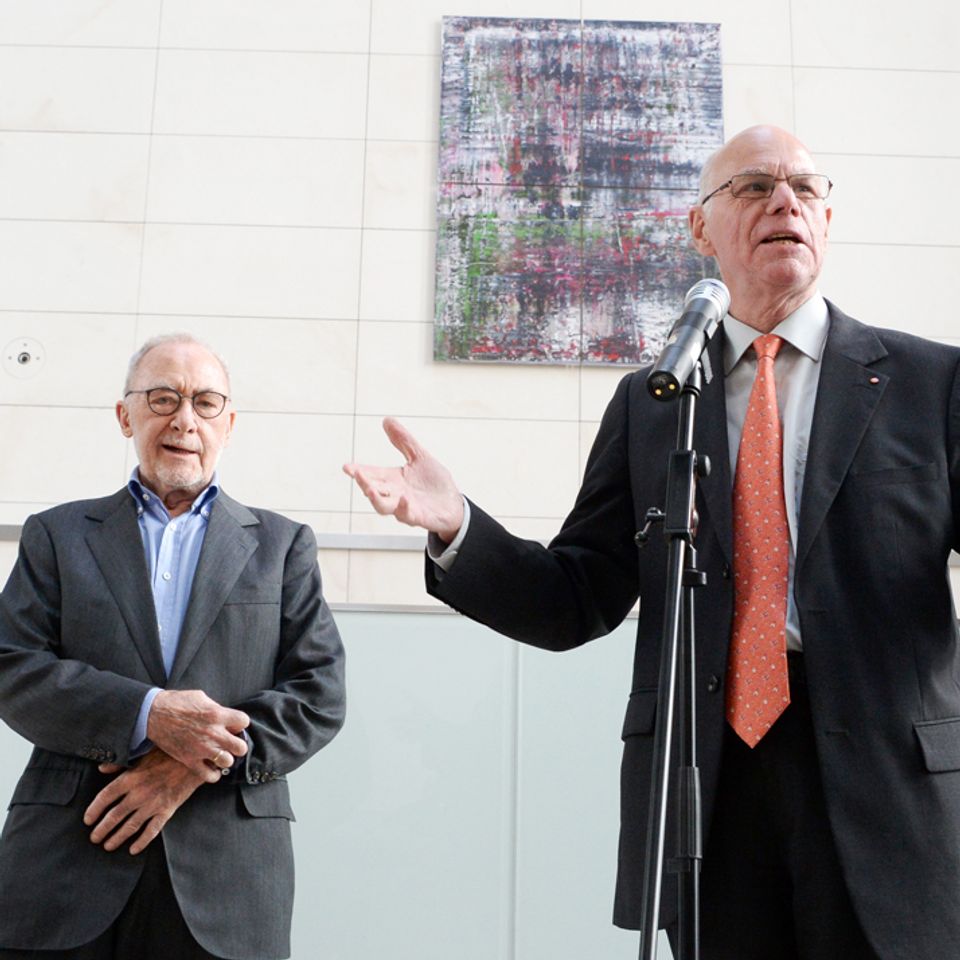 Bundestag President Norbert Lammert together with Gerhard Richter in front of one of the images of the Birkenau series Deutscher Bundestag. Photo: Achim Melde

Gerhard Richter handed over his four-part series Birkenau, the result of his decades-long quest for a creative response to the Holocaust, to the German lower house of parliament in a ceremony on Monday.

Produced in 2014, the images were inspired by documentary photographs of prisoners taken secretly by a Jewish captive in 1944 in the death camp at Auschwitz II-Birkenau, where about 1.1 million people died, many in the gas chambers. Ninety percent of those murdered were Jewish.

Richter first worked with the original photographs, painting over them in stages. Then, from the abstract paintings, he produced photographs and sealed them behind acrylic glass using the Diasec process.

In sombre hues of grey, black and white with pockets of brighter colours, Birkenau now hangs on loan from the artist in the western entrance of the Reichstag in Berlin, the seat of the lower house, or Bundestag. It faces his abstract composition using the colours of the German flag, Black Red Gold, which has hung in the same hall since the reopening of the Reichstag in 1999. Birkenau replaces a light installation by Sigmar Polke which is in need of restoration.

Positioning the two works opposite each other in the entrance hall “creates an arc of reflection and shows the historical dimensions of Germany’s self-image,” according to a statement from the Bundestag, the lower house of parliament.

When asked in 1997 to produce a work for the newly reconstructed Reichstag, Richter had considered addressing the theme of the Holocaust—a subject that has occupied him since the 1960s—but abandoned the idea in favour of Black Red Gold. “It seemed more appropriate to create something more optimistic and hopeful for this entrance,” Richter, who is 85, said in an interview with the Frankfurter Allgemeine Zeitung. “This was after all a nice fresh start, with reunification and a new Bundestag.”

He was inspired to take up the subject again in 2008, when the Frankfurter Allgemeine Zeitung published a photograph from a book showing prisoners burning corpses. “They looked like gardeners burning rubbish,” Richter said in the interview. “It formed such a shocking contrast to what was actually happening.”

Richter bought the book—by Georges Didi Huberman—and found the four images that form the basis for his Birkenau series. “In autumn 2014, I began to transfer these images to canvas, and realised that it wasn’t working at all,” he said. “So I scraped it off and painted again until I had four abstract images. It’s not unusual for me to start from the figurative and end up with something abstract.”

The artist said in 2016 that he would never allow the Birkenau series to be sold at auction. It has previously been exhibited in Dresden and Baden-Baden.