The Munich-based dealer and collector is also due to stand trial in London for allegedly stealing £1.1m in Kusama pumpkin sale 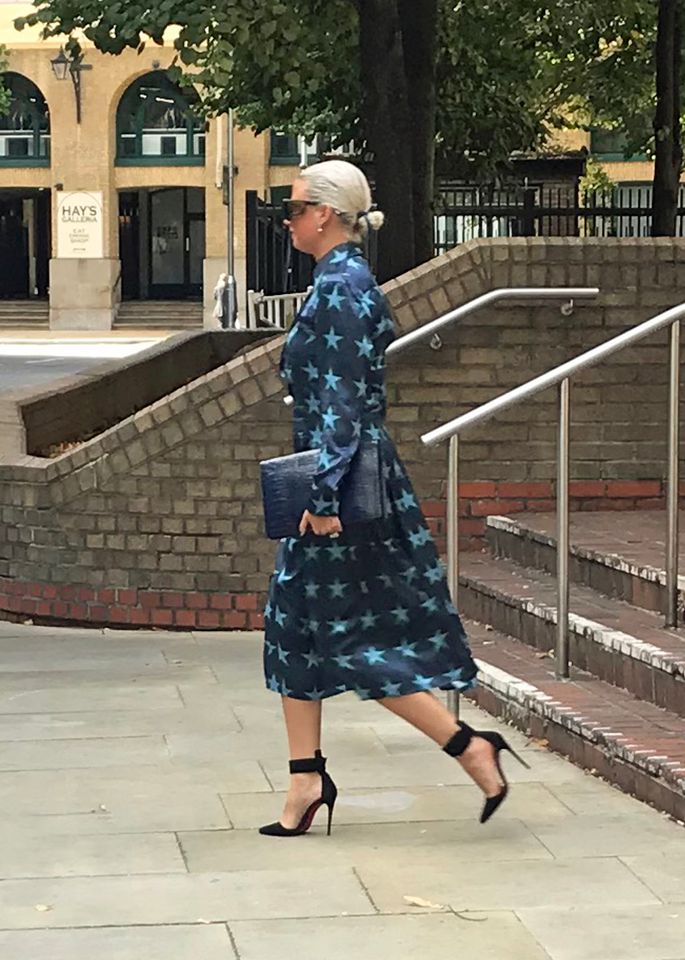 Angela Gulbenkian leaving a London court in September after denying theft charges in the sale of a Kusama pumpkin. The German dealer now faces similar charges in a Munich court over a Warhol print sale to a London dealer. Central News

Another criminal case has been filed against the German art dealer, collector and socialite Angela Gulbenkian, this time over a work by Andy Warhol worth £115,000.

A London dealer filed a complaint on 10 January in a Munich court accusing the dealer of fraudulently selling him a Warhol print, Queen Elizabeth II (1985), on behalf of the owner and pocketing the proceeds.

The London dealer—whose identity is protected under German law—says in the complaint that he “had absolutely no reason to doubt Mrs Gulbenkian” at the time of the sale. He also “assumed that she was authorised to sell the work of art”, but came to realise that “Gulbenkian was not at all entitled to sell the Warhol on these terms”.

According to the court papers, it is “exactly the same scam” that Gulbenkian allegedly carried out against Hong Kong-based art adviser Mathieu Ticolat, who claims she defrauded him in the sale of a yellow pumpkin sculpture by the Japanese artist Yayoi Kusama. Ticolat filed criminal complaints against Gulbenkien in Hong Kong, London and Germany in 2018, alleging that his firm, Art Incorporated, paid the dealer £1.1m for the sculpture, which he never received. A civil suit was also later brought by Ticolat, which included a motion to freeze Gulbenkian’s assets.

The most recent complaint filed in Munich claims that the London dealer paid Gulbenkian £115,000 for the Warhol print on 12 March 2019. He was only alerted to the alleged swindle when the original owner of the Warhol, a German professor named Braun, filed a legal case against him demanding the return of the picture or compensation from him and Gulbenkian. By that time, however, the London dealer had already sold the work.

Since then, the print has been sold again, according to Hannes Hartung, the lawyer acting for the London dealer in the new case as well as leading the legal action in Germany concerning the Kusama pumpkin. “We do not know where the Warhol is now, but Gulbenkian kept the money,” he adds.

Chris Marinello, the chief executive of Art Recovery Group, which is orchestrating the cases, says Braun “was dealing through an adviser, who allowed Angela to take and sell the Warhol to our client. The dispute lies in whether [the adviser] and Gulbenkian had the authority to sell the picture.”

Gulbenkian faces trial on 11 May in London, where she also has a residence, after being charged last May with two counts of theft: one relating to the pumpkin sculpture; the other relating to the theft of £50,000 from client Jacqui Ball. Gulbenkien entered not guilty pleas to both charges at Southwark Crown Court in September and has vigorously denied any allegations of theft.

Gulbenkian, who has been living at her apartment in Munich while she undergoes medical treatment, did not immediately respond for comment regarding the most recent charges. Calls to the law firms Boodle Hatfield in London and Raue in Berlin—both of which have previously represented Gulbenkian—were not returned.