The museum, which did not disclose the price, says the work reflects a shift to a more idealised style 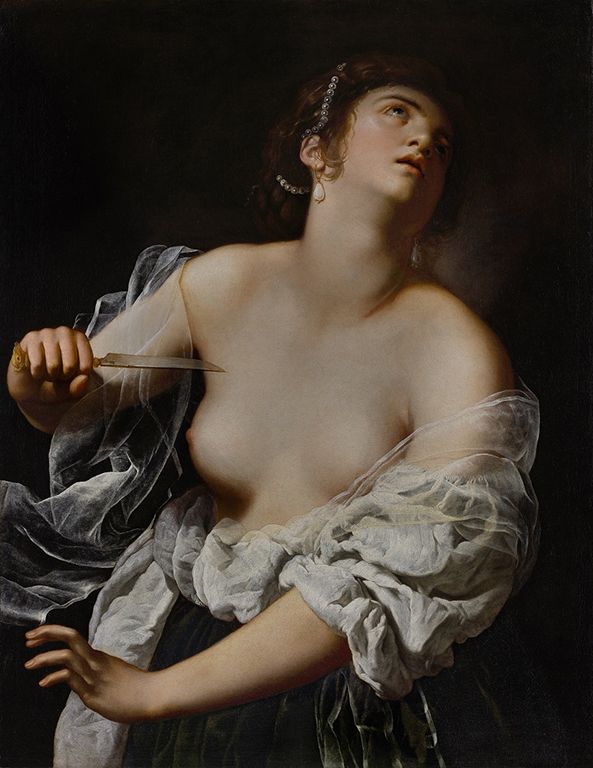 Artemisia Gentileschi's Lucretia, believed to have been painted in the late 1620s J. Paul Getty Museum

The J. Paul Getty Museum in Los Angeles announced today that it had acquired Lucretia, a painting by Artemisia Gentileschi that manifests her ambition for delving into historical subjects and her singular position as a female Baroque artist in 17th-century Italy. The work is believed to date from the late 1620s and will go on view when the museum reopens in the coming weeks, the Getty says. (A firm date has not been set.)

The museum said it acquired the painting from the London dealer Patrick Matthiesen but did not disclose the price. Lucretia was rediscovered after residing in private collections for centuries, it adds. It sold in 2019 for €4.8m (with fees) at the Parisian auction house Artcurial, setting an auction record for the artist.

The Getty notes that the subject is one that had deep significance for Artemisia: Like Lucretia, the legendary heroine of ancient Rome who committed suicide after she was raped, Artemisia was raped as a young woman and sought legal redress. Lucretia is depicted with her eyes cast upward and her head tilted back, as she plunges a dagger into her chest.

Although largely overlooked until the late 20th century, Artemisia (1593-around 1654) is now considered the greatest woman artist of the Baroque age and one of the more talented followers of Caravaggio in her early years.

The daughter of the painter Orazio Gentileschi, she trained in his Rome workshop and eventually gained entrée to artistic circles, marrying and carving out a career after the 1611 rape by the artist Agostino Tassi and subsequent trial. Thereafter she found success while working in Florence, Rome, Venice and Naples. The Getty owns two paintings by Orazio Gentileschi, Lot and His Daughter (around 1622) and Danaë and the Shower of Gold (1621-23).

The museum says there is evidence that this Lucretia was painted in the artist’s time in Venice in the late 1620s.

“With its swirling and exuberant drapery, and its free brush strokes, the picture shows the profound engagement with the artistic legacy of 16th-century Venetian painting, especially with the female protagonists of paintings by Titian and Veronese,” the museum says. “The painting also reflects Artemisia’s close contact with expatriates active in Venice in the 1620s, such as the French Nicolas Régnier, the German Johann Liss and the Genoese Bernardo Strozzi.”

The museum suggests that it is “highly probable” that the painting is one lauded in works by the poet Giovanni Francesco Loredan published in Venice in 1627.

Davide Gasparotto, senior curator of paintings at the Getty Museum, said the work illuminates a phase in which Artemisia was shifting from a dramatic Caravaggesque style to “a more graceful and idealised manner”.

“Lucretia is a powerful and compelling example of Artemisia’s most significant type of subject, the representation of dynamic female figures which appear in control of their own destiny,” Gasparatto says. “But with its lyrical and sophisticated expressivity, its creamy impasto and vibrant brushwork, the painting is also suggestive of new directions in her artistic itinerary”.

Timothy Potts, director of the museum, suggests that the painting, shaded by the artist’s life experiences, also has relevance for contemporary viewers. “Artemisia’s Lucretia,” he says, will open a window for our visitors onto important issues of injustice, prejudice and abuse.”