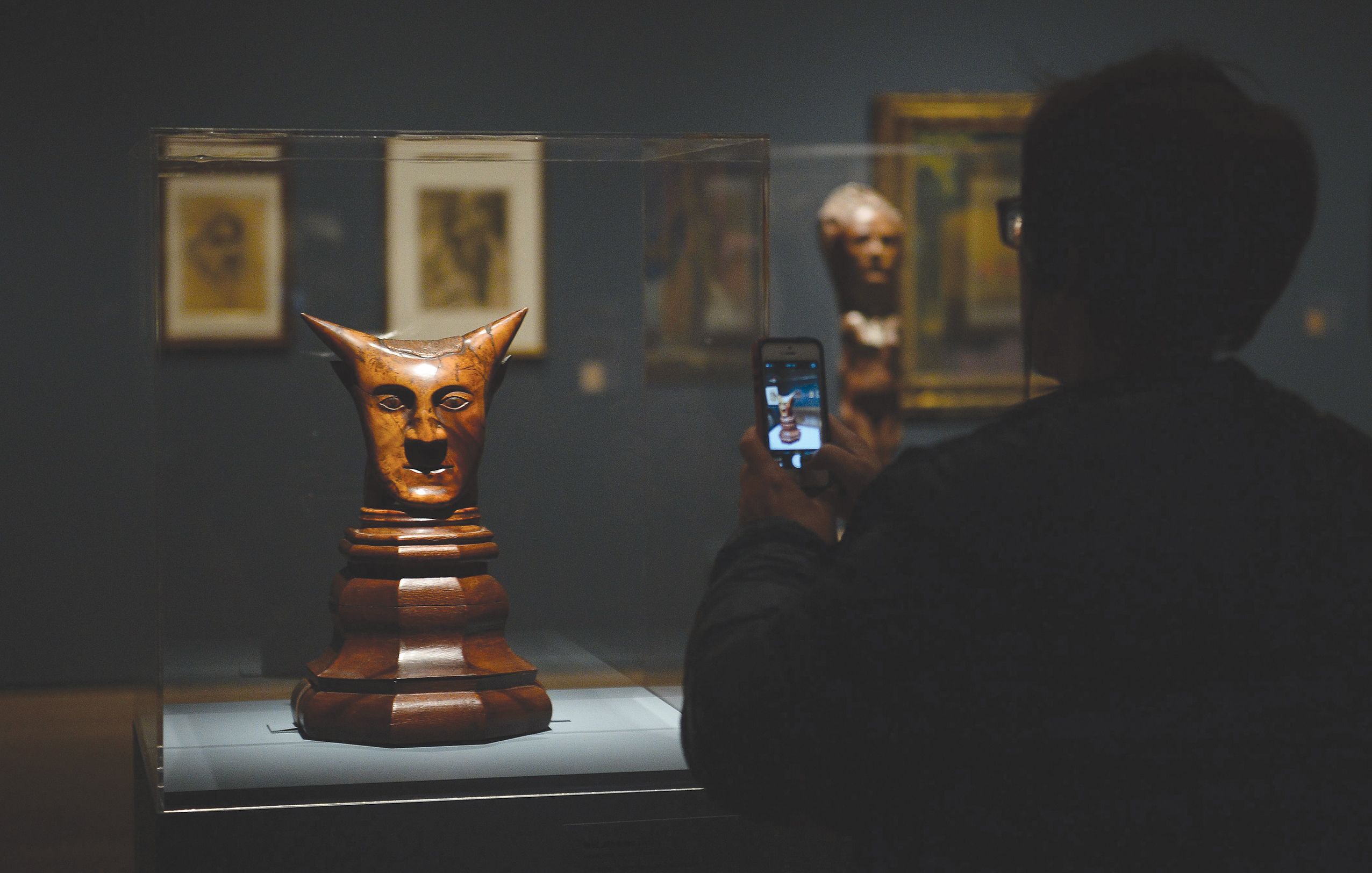 Before the Getty admitted Head with Horns was not a Gauguin, it went on show as the artist’s work in exhibitions around the world, including at New York’s Museum of Modern Art Photo: EMMANUEL DUNAND/AFP via Getty Images

The J. Paul Getty Museum in Los Angeles was privately warned in 2002 that a Gauguin sculpture it had just bought for around $4m was a fake. A few months later the museum sent a researcher from Los Angeles to Paris to investigate, but she failed to resolve the question—so the matter remained unpursued with the Wildenstein gallery, which had sold them the work.

A year ago, the museum finally admitted that Head with Horns is not an authentic work by Gauguin—and it was banished to the storeroom. The Getty is now being more open about the object’s history, and is publishing two scholarly articles this month in the Getty Research Journal.

While American and British experts have mainly accepted from the start that Head with Horns, which was shown in Gauguin: Maker of Myth, the 2010-11 exhibition at London’s Tate Modern and the National Gallery of Art in Washington, DC, was a work by Gauguin, French art specialists were sceptical about the sculpture. They include Anne Pingeot, France’s honorary general curator of heritage, who played a key role in the formation of the Musée d’Orsay in Paris and oversaw its sculpture collection.

In the Getty journal, Pingeot writes that, despite strenuous efforts, she has still been unable “to shed any light on its journey” from the 1890s until its appearance at Wildenstein’s. The dealer was unwilling to disclose the provenance, other than saying they had acquired it from an unnamed Swiss owner.

But the Getty has revealed that it was warned from the outset that the sculpture’s attribution was highly questionable. Gilles Artur, the director of the Musée Gauguin in Tahiti, wrote in August 2002, three months after the purchase, that Head with Horns was a curio made for the European market.

Pingeot explains: “Concerned that they [the Getty] might have acquired a work that was not, after all, by Gauguin, the Getty curators sent research assistant Anne Iverson to France to investigate in 2003.” Although Pingeot does not comment on the result of Iverson’s visit, the Getty press office now says that the research assistant was “not convinced” by French specialists who privately rejected the attribution. (In 2009, I published a detailed article in Apollo questioning the attribution, assisted with research by Fabrice Fourmanoir.)

In the Getty journal, Pingeot concludes that Gauguin not only did not carve Head with Horns, but he “probably never even saw it for real”. The evidence for this is a photograph of the sculpture, which recent research has dated to 1894, a year before Gauguin returned to Tahiti from France.

Instead, Gauguin received two photographs of Head with Horns taken by his friend Jules Agostini, which he pasted in his Polynesian Noa Noa album. Inspired by it, he used it in four of his own prints.

In another article, Anne-Lise Desmas, the Getty’s senior curator of sculpture and decorative art, admits there were “doubts expressed by certain specialists and arguments that could have disproved the attribution as early as 1969”. That year, Patrick O’Reilly, the founder of Tahiti’s Musée Gauguin, pointed out in a footnote in a scholarly article that Agostini had described the sculpture as Polynesian.

Desmas still hopes to solve the puzzle of what sort of a sculptor carved Head with Horns. Specialists she has consulted “do not think it is a traditional Polynesian sculpture”. It was therefore either a Polynesian work for a European buyer or a European in the South Seas.

One avenue of research would be an examination of the woods used: sandalwood for the head and lacewood for the base. The Getty hopes to undertake an analysis of the molecular compounds of the woods, which might locate where in the Pacific the trees had grown.

In her conclusion, Pingeot argues that Gauguin’s act of copying the head from one of Agostini’s photographs in his own work represented “a creative act because he appropriated them”. She adds: “Head with Horns, answering the ‘innumerable needs’ of Gauguin’s psyche, became his own work. What does it matter if he wasn’t the first author?”

But the Getty clearly thinks it matters, since the sculpture has now been hidden away in store. Although the work is important as an image deeply admired by Gauguin, the price tag would have been very different if it had been sold as the work of an anonymous artist. The Getty does not disclose prices, but outsiders have estimated that Head with Horns cost it $3m to $5m—a record price for a Gauguin sculpture at the time.

• Find out more about the fake Gauguin in this episode of our The Week in Art podcast.