Google Doodle honours Juneteenth with art and words of liberation 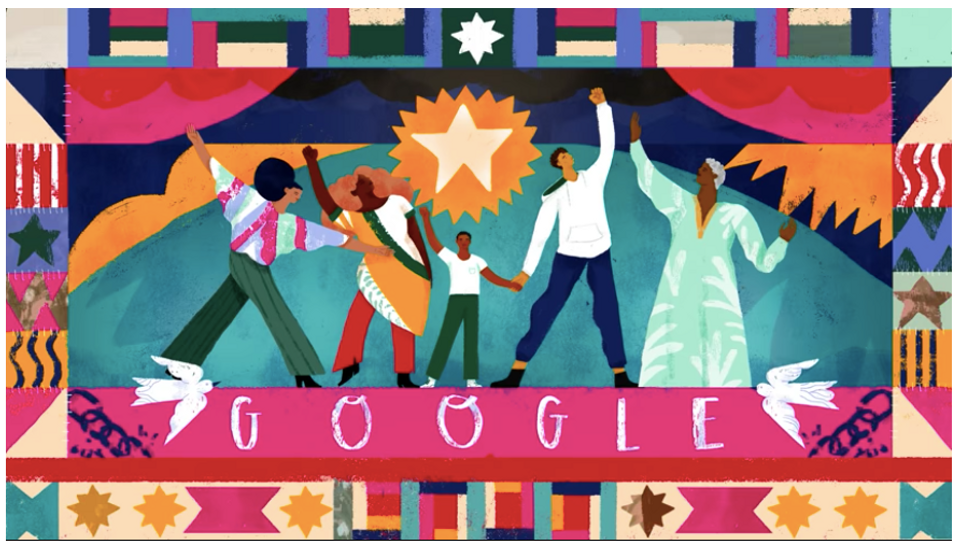 A still from the Friday, 19 June Google Doodle

Google has commissioned an original animation featuring drawings by the American artist Loveis Wise, to celebrate Juneteenth today. The holiday commemorates 19 June, 1865, when—two and a half years after the signing of the Emancipation Proclamation—news of liberation reached the enslaved populations of Texas, ending almost 250 years of slavery in the US. The 90-second Google Doodle overlays Wise’s illustrations with the words of James Weldon Johnson’s 1900 poem “Lift Every Voice and Sing”—popularly known as the Black national anthem—read by actor and activist LeVar Burton.

“What comes to mind for me when I think about Juneteenth is the day where we celebrate our liberation to truly be free,” Wise says in a video about the project produced by Google. “And of course celebrating with friends and family—our resilience as black folks in America.”

“For this doodle, my biggest concept was: freedom in this country is a journey,” says Angelica McKinley, the project’s creative director. “We wanted to take people through the experience of gaining freedom as a Black person in America, and to see how across generations that freedom has been a push and pull. You can see in the doodle from the moment we step into that first Juneteenth that happened in 1865 to today, there’s been that ebb and flow of freedoms won, backtracking, and then pushing forward.” McKinley added that “Loveis’s work is colourful and joyful. I really wanted to bring that aspect into this doodle, even when we’re talking about slavery or hard times, focus on Black joy and happiness.”

“I was so excited that Angelica suggested using ‘Lift Every Voice’ to set the framework and the tone,” says Wise. “That song has always been in my life, from the time I was a child. It shows just how far we’ve come and how we use our voices to stand up for our rights and ourselves.”