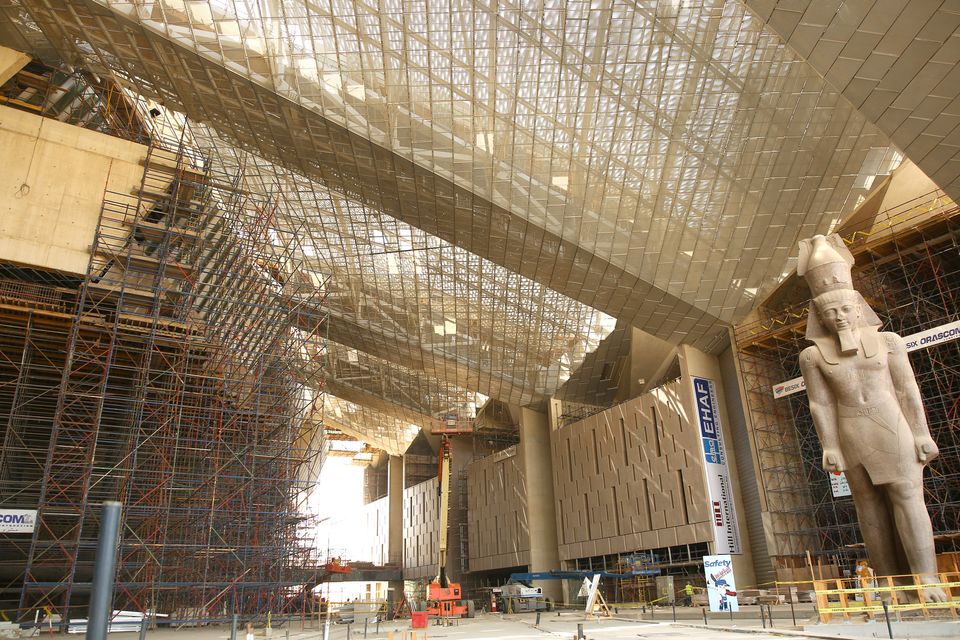 The soaring entrance hall of the Grand Egyptian Museum, where a 12m-tall, 83-ton granite statue of King Ramses II is already in place

The opening of the long-delayed Grand Egyptian Museum (GEM) near the Pyramids of Giza has slid again, to 2020. As recently as June, officials said the museum would open partially in 2019 for the unveiling of its star attraction—all 5,400 objects from the tomb of King Tutankhamun. The full opening was expected to follow in 2022, the centenary of Howard Carter’s discovery of the boy pharaoh’s tomb. The Egyptian government’s new ambition is for the entire 490,000 sq. m complex to open in 2020, says Tarek Tawfik, GEM’s director. The museum was first announced in 1992 and initially scheduled to open in 2012.

The shift is part of a “broader vision” to boost cultural tourism to the Giza Plateau, Tawfik said in an interview at the Egyptian pavilion of London’s World Travel Market fair this week. As Egypt struggles to revive a tourism industry hit by political instability and terrorist attacks, Giza “is being developed and modernised as a visitor experience, so the two big attractions, the Pyramids and the Grand Egyptian Museum—should be linked and complement each other”.

A key factor in this development is the Sphinx International Airport west of Cairo, located half an hour away from GEM, which received its first test flight in October. “By the time of the complete opening of the museum, [the airport] will be up and running,” Tawfik says. “We hope that this will enhance the numbers of visitors to our museum, even for weekend tourism.” GEM anticipates around five million visitors a year, with international tourism providing “an important source of revenue to ensure the sustainability and maintenance of this huge museum”, he says.

Costing an estimated $1bn, the world’s largest archaeological museum will also be home to 28 shops, ten restaurants, a conference centre and a cinema. The Egyptian government is planning to tender for a facilities management company that will oversee all commercial operations, including ticketing and events, from mid-2019. This kind of private-public partnership is unprecedented in an Egyptian museum, Tawfik says.

What is more, GEM aims to break new ground in its displays of ancient Egyptian artefacts, which will emphasise the social, political and religious contexts in which they were made. Around 50,000 objects (half of the total collection) will make up a “bigger picture” that moves chronologically from prehistory to the Greco-Roman period, Tawfik says. More than 20,000 items have never been shown before, including archaeological discoveries from recent decades and monumental pieces too large for the present Egyptian Museum in central Cairo’s Tahrir Square. Designed by the Dublin-based Heneghan Peng Architects, GEM will have galleries up to 20m high.

Unlike the Tutankhamun display at the Tahrir museum, where treasures such as the King’s golden death mask and coffin “were left to impress by their mere artisanship”, Tawfik says GEM will immerse visitors in his court, his lifestyle and his funeral. Two galleries measuring more than 7,000 sq. m will reveal, for example, how he dressed, what he ate and what he did for Egypt. “The interesting thing about Tutankhamun is that we are still at the verge of studying and researching him.”

The museum’s team of around 100 conservators and 100 curators is facing the “huge challenge” of examining and preparing each object for display in 2020 with “great enthusiasm”, Tawfik says. GEM’s Conservation Center, which has been active since 2010, has already reviewed 38,000 pieces in the collection. Restoration is currently under way on Tutankhamun’s gilded ceremonial beds in the form of a lion and a cow.

The building project is around 85% complete. “The big challenge now is to synchronise between completing the construction works and getting the artefacts ready and in place in the museum in time for the grand opening,” Tawfik says. “One thing I promise, the opening will be as grand as the name of the Grand Egyptian Museum.”