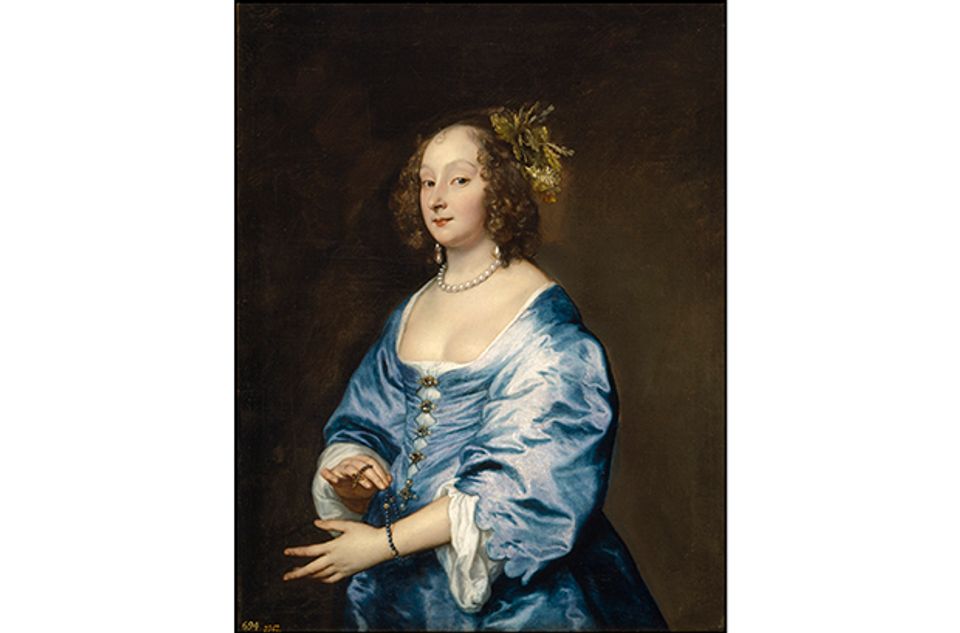 When, one hundred years ago Henry Clay Frick acquired Van Dyck’s portrait of Lady Anne Carey from its English owners, he was laying hands on a picture the possession of which would instantly signify class, as well as presupposing wealth. It announced the incursion of a mere steel baron into the realms of the highest nobility. A fascinating essay in Van Dyck: the Anatomy of Portaiture by Adam Eaker shows how Van Dyck came to symbolise ancestral class in a changing, unstable world. “Van Dyck crafted a rhetoric of aristocratic entitlement so successful that succeeding generations of collectors, divided by war, revolution and massive social change, have claimed it as their birthright.” He not only provided a passport to posterity for his sitters (as well as apparently inventing the curtained backdrop in the passport photo), but lent a special lustre by proxy to those subsequently in possession of one of his portraits.

Ennobled for his art, Van Dyck in turn ennobled those who could own it. The Frick Collection would eventually boast several Van Dyck portraits. These have now been joined by exquisite examples from every stage of Van Dyck’s career (namely the two Antwerp periods, interrupted by his Italian sojourn, and, of course, the English period) for an exhibition that necessitated expanding the Frick’s cosy gallery space.

Van Dyck did not apparently feel the pull of grander genres. He seemingly never tired of painting portraits, which is maybe why he could be so prolific, yet never formulaic, even in a short life. Van Dyck had a gift for giving expression to unforgettable faces, even, pace Oscar Wilde, those of the English, whether in his likeness of Inigo Jones, the posthumous serenity of Venetia Digby or, most famously, that sad face of Charles I.

Paradoxically, Van Dyck’s association with the doomed Stuarts appears to have lent not only those particular portraits, but perhaps all his others too, an enhanced potency and poignancy, which would guarantee their durable appeal, no less so in the republic where Frick made his money. Having painted the king and family, Van Dyck’s sitters all came to be invested retrospectively with an aura of grand melancholy. Although Van Dyck would die in 1641, years before Charles was executed (or martyred), we know what will happen, and we may feel that somehow the artist, and the king returning his gaze, did too.

Or was that melancholy already in place? “An affinity for sitters with a more melancholy or soulful appearance”, remark the editors, rapidly emerges alongside his precocious talent. Indeed, the title chosen for show and book explicitly echoes The Anatomy of Melancholy by Van Dyck’s contemporary, Robert Burton. It seems that whereas the melancholy seen by critics in, say, Watteau’s art is a product of the 19th-century imagination, prompted in part by colours which had become considerably darker and dirtier, the Van Dyckian melancholy discernible to us was evident to the first viewers, and indeed the pristine brilliance of the costumes and the colours only throws it into relief.

Ruskin, who could keep the judgments of hindsight under control, observed that Van Dyck’s sitters, however great, lacked the swaggering self-assurance of Titian’s grandees, but were characterised by insecurity, indeed melancholy. Van Dyck would then, more than any other artist, become a byword both for magnificence and fragility. It would be interesting to investigate the posthumous signification of Van Dyck in literary works. In Walter Scott’s Bride of Lammermoor (1819), for instance, the portraits of the Ravenswood family “in the manner of Van Dyke” not only recall the good taste and wealth of that dynasty, but also presage the fall of its last scion, and if that disaster is not signalled obviously enough, one of the pictures duly and literally falls to the floor, an event that never fails to be ominous. In fact, this literal descent recalls the actual, well-attested fall from the wall of Van Dyck’s portrait of the Viceroy Emanuele Filiberto of Savoy in 1624. He, of course, died suddenly within months.

Perhaps more than those of any other great master, Van Dyck’s portraits were, from a very early point, irresistible to those with no relation to or no knowledge of the sitter. Such were the portraits which formed part of the Duke of Orléans’s collection, dispersed by the French Revolution, and indeed, latterly, the Frick Collection.

But the catalogue emphasises another concurrent genealogy, remarkably robust and long-lived, in which Van Dyck featured prominently. Having himself assembled a collection of Titian portraits, Van Dyck became the pre-eminent runner in a “relay race” of artists, linking the Venetian masters to later fellow knights, Joshua Reynolds and Thomas Lawrence, who greedily bought up Van Dycks at every opportunity. This emphasis on “the taste for Van Dyck”, shared by artists and nobles alike, provides a linkage in what perhaps will seem an arbitrary, if splendid, selection of portraits.

Two principal difficulties would appear to confront those who stage any exhibition of portraits. They must say enough, but not too much, about the sitter to guarantee the interest of the paintings, while allowing them to speak for themselves. They must also resist the almost inevitable temptation to assert that the given portraitist somehow revealed psychological truth (and that he was the first to do so). Leonardo, Giorgione, Titian, Dürer, Ingres, Goya, as well as Van Dyck, have all been validated as pioneers of this sort, but it is of course difficult, if not impossible, to show how the portraitist achieves insights which are necessarily unquantifiable. This show negotiates both pitfalls.

The impact of Van Dyck can instead be measured in at least one other way, registered also in exhibition and catalogue alike. The urgency of the desire to own a Van Dyck was responsible for numerous misattributions. Sorely wanting a Van Dyck, prospective owners duly wanted any eligible portrait to be by him. Alert to these impulses, the catalogue shows a number of portraits previously thought to be by Van Dyck, now given to lesser lights, like Cornelius Johnson, who left London because of Van Dyck, and Peter Lely, who arrived in London upon his death. This selection provides a sober coda to a book which rejoices in the genius of Van Dyck and the magnificence of his portraits without needing once to resort to any hyperbole.

• John Leigh is a Fellow of Fitzwilliam College, University of Cambridge. His most recent book, Touché, is a study of duelling in European literature

Van Dyck: the Anatomy of Portraiture