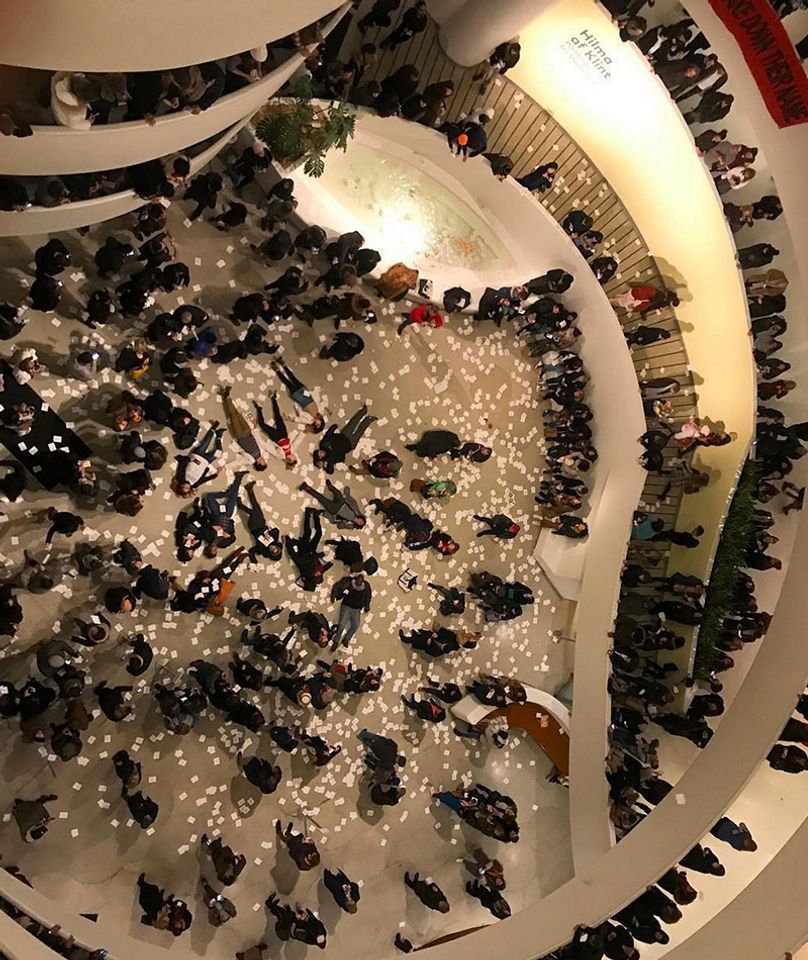 The statement, initially reported by Hyperallergic, refers specifically to the Mortimer D. Sackler family, a Guggenheim spokeswoman confirms. Members of this branch of the Sacklers have been individually named in lawsuits over the marketing and sale of the painkiller OxyContin, which is produced by Purdue Pharma, the pharmaceuticals company in which they have a controlling stake and has helped to fuel the US opioid crisis.

The Guggenheim received a $7m gift between 1995 and 2006 from the Mortimer D. Sackler family “to establish and support the Sackler Center for Arts Education, which serves approximately 300,000 youth, adults, and families each year”, the museum says. The family bestowed an additional $2m gift “to support the museum” between 1999 and 2015, it adds. A spokeswoman confirms that the Guggenheim does not plan to change the name of the education centre.

A spokeswoman for Mortimer D.A. Sackler, who is the son of the late Mortimer D. Sackler and is named as an individual in lawsuits, says in a statement: “It has been a privilege for Mortimer Sackler to serve on the Guggenheim’s board of trustees for nearly 20 years and to support the vital work of the museum.” As the New York Times reported, Sackler stepped down from the Guggenheim’s board last year.

“For more than half a century, several generations of Sacklers have supported respected institutions that play crucial roles in health, research, education, the arts and the humanities and remain committed to doing so,” the Sackler spokeswoman’s statement adds. “Unfortunately, the current climate of litigation has created false impressions that we are working to clear up.”

New York’s Metropolitan Museum of Art announced in January that it was reviewing its overall gift acceptance policy in light of the Sackler lawsuits. In a statement issued today, the Met’s president and chief executive, Daniel Weiss, says: “We will continue our review of the museum’s gift acceptance policies, will adjust wherever necessary, and will be transparent in our process and conclusions.” According to the statement, the Met has not received gifts from the Sacklers over the past two years.

Weiss also notes that US cultural institutions, hospitals and universities in the US rely heavily on private gifts: “One cannot walk into a museum, library, hospital, or university without being reminded that the buildings and the programmes they house would fail to exist without philanthropy,” he says.

“With the benefit that comes from accepting these gifts, comes the obligation for institutions to devise thoughtful gift acceptance policies that ensure that they can realise their respective missions and values,” Weiss adds. “At the Met, we fully acknowledge that our institution has an obligation to be accountable for its decisions.”

“The issue of Sackler funding reflects a complexity that is common in this area,” the statement continues. “The Sacklers began supporting The Met over 50 years ago – decades before the invention of opioids and the public health crisis that has later ensued. The contemporary Sackler family is large and there are varying relationships among these branches with Purdue Pharma (some have had no relationship with the company for decades).”