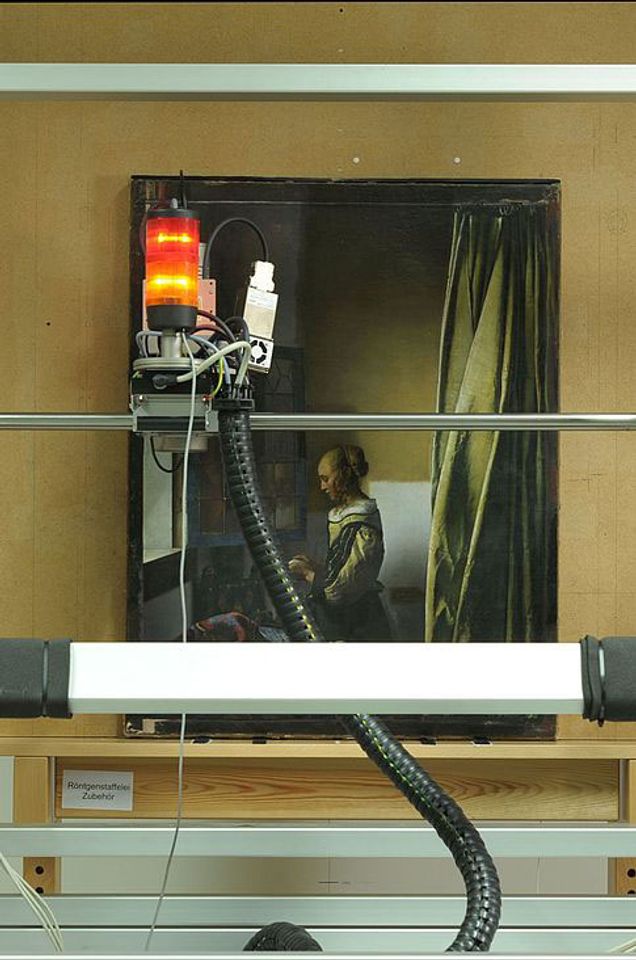 A hidden Cupid in Vermeer’s Girl Reading a Letter at an Open Window, one of the world’s most famous paintings, is set to resurface on the canvas after two and a half centuries behind a layer of paint. During restoration work, conservators discovered, to their surprise, that the naked figure—which dominates the upper right section of the picture—was overpainted long after the artist’s death.

On the original canvas, the Cupid “picture within a picture” hung on the wall behind the letter-reading girl. It was detected 40 years ago by x-ray, but scholars had always assumed that Vermeer himself painted over it, says Uta Neidhardt, the senior conservator at Dresden’s Gemäldegalerie. The decision to restore Cupid to the work was taken after recent laboratory tests established beyond doubt that the figure was overpainted decades after Vermeer completed it.

“There was even a layer of dirt above the original varnish on the Cupid, showing the painting had been in its original state for decades,” Neidhardt says. The overpainting was also slightly darker than the colour used by Vermeer in the background of his work, because the later artist needed to compensate for the darkening varnish on the original, she says.

“This is the most sensational experience of my career,” she says. “It makes it a different painting.”

Produced in around 1657, Girl Reading a Letter at an Open Window has been in Dresden’s city collections since 1742 and is one of just 35 paintings definitively attributed to Vermeer. The same Cupid painting also features in A Lady Standing at a Virginal in the National Gallery in London. Scholars believe it may have been a real picture in Vermeer’s possession: a 1676 inventory of his widow’s belongings includes mention of “a Cupid.” The work with the cupid showing Courtesy of the SKD. Photo: Wolfgang Kreische

Vermeer often referenced other works of art in his paintings as a device to convey supplementary information or commentary. The Cupid painting is “the only clue suggesting a love story” in the painting, Neidhardt says. “The elements of disguise and concealment play a less dominant role in this early work by Vermeer than the composition whose background was changed by another hand led us to believe.”

She concedes that some viewers familiar with the painting before its restoration may miss the quiet background and introspective mood.

In 2017, Christoph Schölzel, Dresden’s painting restorer, began working on Girl Reading a Letter at an Open Window. Though in good condition, its surface was coated in a varnish that had darkened with age, turning the cool, subtle colours of the painting yellowish. The first stage of Schölzel’s work focussed on removing this layer.

After laboratory tests at Dresden Academy of Fine Arts and x-ray fluorescence examinations conducted with the support of the Rijksmuseum in Amsterdam confirmed that the overpainting was significantly newer than the painting, the decision was taken in early 2018 to remove the later paint and expose the Cupid. An external panel of experts, including Ige Verslype at the Rijksmuseum and Arthur Wheelock at the National Gallery in Washington, is advising on the restoration, which is funded with support from the Hata Foundation in Amsterdam and Tokyo.

Schölzel’s painstaking work requires a microscope and a scalpel, which allows him to scrape off the overpaint without removing the original varnish on Vermeer’s version of the painting. The Cupid is so far about half-exposed—it is estimated that the work will require at least another year. Girl Reading a Letter at an Open Window will be displayed in its current, semi-restored state from 8 May to 16 June in the Gemäldegalerie Alte Meister in the Semperbau in Dresden.

Dresden possesses two Vermeer paintings, and they are among the most important and valuable treasures in the city’s rich art collections. The second, The Procuress (1656), was restored between 2002 and 2004.