As the Washington, DC institution begins a renovation project in September, a four-storey-high work will adorn its scaffolding 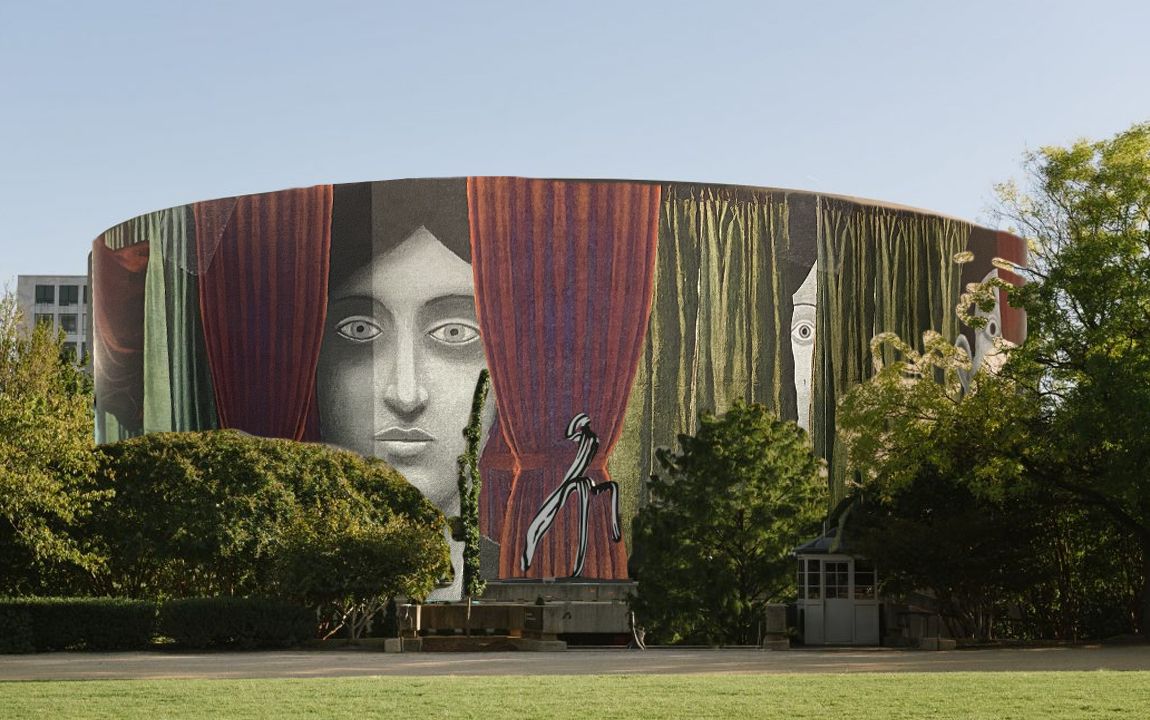 Mock-up rendering for the installation Draw the Curtain (2021) by Nicolas Party, commissioned by the Hirshhorn Museum and Sculpture Garden, scheduled to debut fall 2021 Courtesy of the artist

Most museums along the National Mall in Washington, DC, have already reopened after long pandemic closures, but the Hirshhorn Museum and Sculpture Garden remains closed through the summer. The modern and contemporary art museum hopes to make up for the extended absence of public interaction with a striking project to kick off autumn. This September, the Hirshhorn plans to mount a painting along the entire exterior of its cylindrical museum building. Running four storeys high with a circumference of 829 ft, Draw the Curtain, a site-specific commission by the Swiss-born artist Nicolas Party, will upend views in the city’s monumental core with cheeky scenes of hide and seek.

The enormous undertaking is a follow-up to sunrise, sunset, another wrap-around pastel painting by Party, created for the Hirshhorn’s interior galleries in 2017. Draw the Curtain also continues the tradition of other projects that have embraced the curve of the Hirshhorn’s Brutalist drum as a platform, including Doug Aitken’s video spectacular SONG1 in 2012.

Scaffolding currently encircles the 1974 building, which is undergoing an exterior renovation, and Party’s pastel painting will grace the scrim along the scaffolding, with figures peering out at passersby from behind drapes. “He’s making reference to a trompe-l'œil technique, but it’s also this play on the idea of a screen and peeking behind the cover,” says Anne Reeve, an associate curator for the Hirshhorn.

The project comes at a time when the Hirshhorn is rethinking its entire campus. A plan to revise the museum’s sculpture garden led by artist Hiroshi Sugimoto—who reimagined the lobby in 2017 and showed his first career survey at the museum in 2006—won approval from a federal design oversight agency on 15 July. The plan, which has come under fire from some preservationists, will introduce stone-stacked walls to frame Modernist bronze sculptures and other features, dividing the sculpture garden into distinct gallery areas.

Current construction at the museum involves removing and replacing some 670 panels along the exterior for routine maintenance. Swenson pink granite mined from the same quarry in Maine used for the building 50 years ago will once again used for the job. Much of this work will be hidden from prying eyes behind the Party partition.

To anyone on the Mall, Draw the Curtain will look like a continuous 360-degree pastel painting. The project in fact comprises 126 sections of scrim. Party composed the piece digitally, and two US engineering companies, BrandSafway and Total Enclosure Sail System, will execute the installation. The piece will remain up for the duration of the renovation project—about ten months, until summer 2022.

The Hirshhorn reopens to the public on 20 August, while Party’s piece won’t be up until mid-September. Museum staffers hope that it spurs Washingtonians to look at the city with fresh eyes.

“It’s a nod to what’s going on behind the curtains in all of these other government buildings throughout the rest of the district,” Reeve says.