Historic churches of Naples are at risk from sinkholes 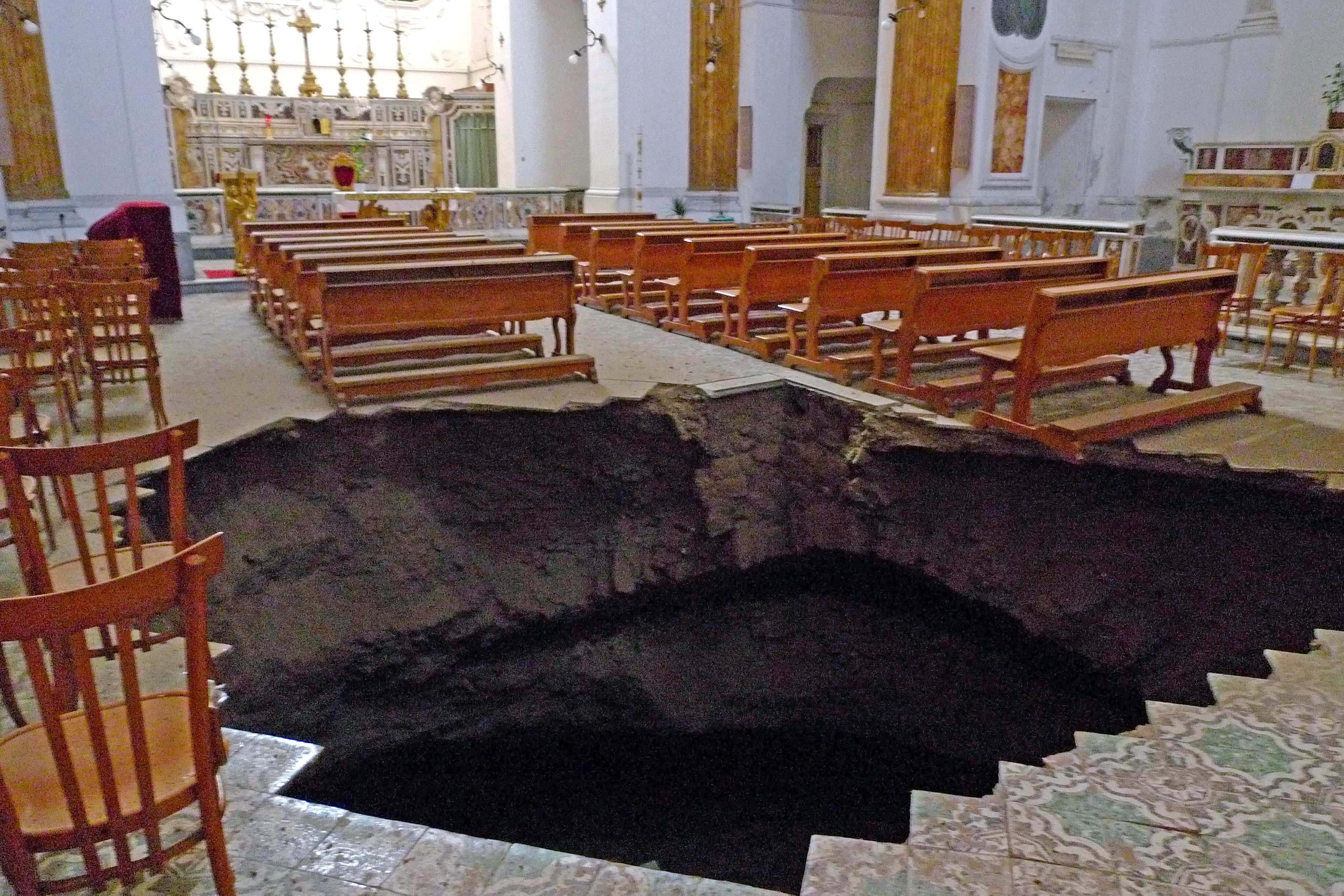 In September 2009, a sinkhole opened in the 17th century church of San Carlo alle Mortelle, known for its Baroque art, creating a pit more than five metres deep. The church reopened in 2017 after €1.5m worth of repairs Photo: Ciro Fusco/EPA/Shutterstock

Many of the historic cathedrals, churches and chapels of Naples, Italy are at risk of vanishing into the earth, according to new research published in the Journal of Cultural Heritage. Combining map data with satellite imagery used to measure subtle changes in ground levels over time, a team of researchers from the University of Naples Federico II have identified which of the city’s places of worship are most at risk from sinkholes. The team revealed that nine are built over subterranean cavities, on ground affected by “ongoing deformation”, making these areas highly susceptible to sudden collapse. These buildings require a “quick response,” the team writes, including ongoing monitoring and checking the stability of the ground. They also say a further 57 places of worship lie above “potential future cavity collapses”.

The historic centre of Naples, a Unesco World Heritage Site since 1995, has more than 500 places of worship—cathedrals, churches and chapels—built over many centuries in various architectural styles. These buildings stand over an extensive network of underground spaces, used over the years as cemeteries, catacombs, crypts, aqueducts, cisterns, and stone quarries. But the soft stone that enabled the excavation of these subterranean spaces has left the ground above susceptible to collapse. The team writes that 190 sinkholes occurred between 1870 and 2010 in and around Naples, adding that of these, around 25% were caused by collapsing cavities, leading to deaths and damage to cultural heritage. “Such collapses, involving tuff and loose volcanoclastic soils, apparently occurred due to external triggers like significant rainfall events and human activities,” the researchers say.

According to the team, among the nine places of worship identified as highly susceptible to cavity collapse is the Pantheon-inspired 19th-century Basilica di San Francesco di Paola, close to Naples’ main square and one of the city’s major tourist attractions. Others include the church of San Giuseppe delle Scalze a Pontecorvo, often used as an event space or accessible by guided tours; the Basilica dello Spirito Santo, a cultural centre and exhibition gallery; and the Basilica di Santa Maria della Pazienza, which remains an active place of worship. Sinkholes have afflicted Naples’ churches before. In September 2009, one opened in the 17th century church of San Carlo alle Mortelle, known for its Baroque art, creating a pit over five metres deep. The church reopened in 2017 after €1.5m worth of repairs.

Since 2007, a large-scale EU-funded project has been redeveloping Naples’ historic centre, including the restoration of a number of the city’s churches. Now in its second phase, set to run until 2022, the project has received around €100m per phase, mostly from the European Regional Development Fund. Thanks to this investment, some of Naples many closed and abandoned churches have now reopened. Among them is the 17th century church of Santi Cosma e Damiano ai Banchi Nuovi, which reopened in October for cultural activities, decades after its closure.