The arts and crafts chain has amended its complaint regarding the ancient tablet, which it bought for at auction for $1.67m in 2014. It was seized by US authorities in 2019 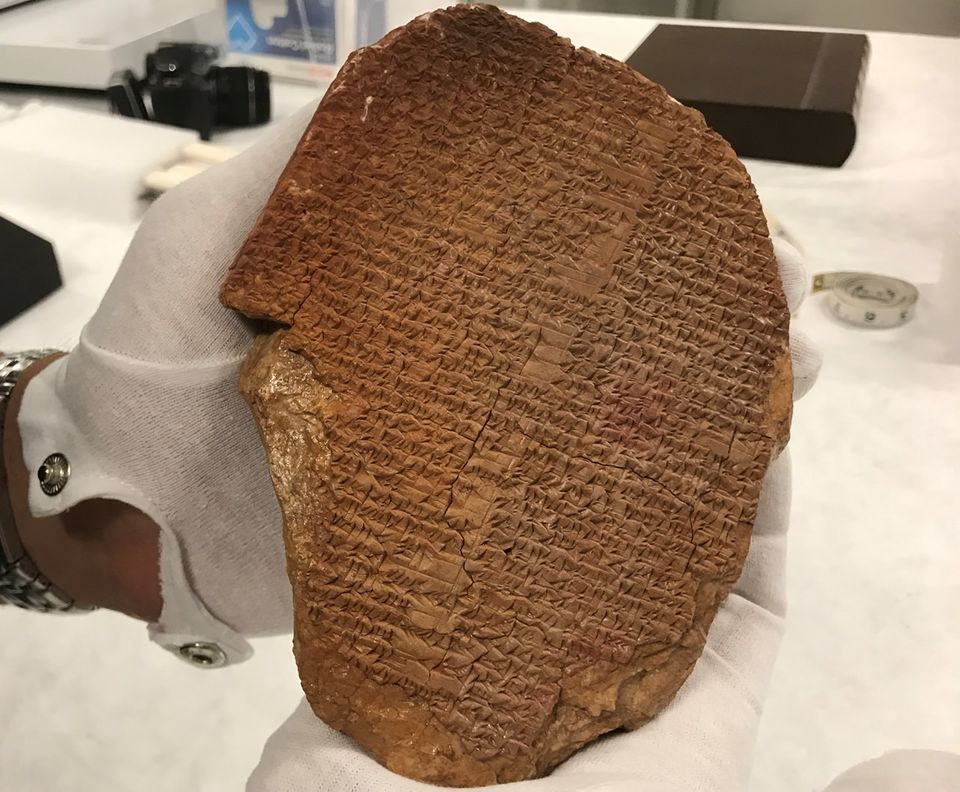 ICE’s Homeland Security Investigations (HSI) New York seized the cuneiform tablet bearing a portion of the epic of Gilgamesh, a Sumerian epic poem considered one the world’s oldest works of literature, from the Museum of the Bible in 2019 Photo: ICE-HSI

New details have emerged in a lawsuit in which the arts and crafts chain Hobby Lobby alleges Christie's knowingly sold it an ancient Mesopotamian tablet inscribed with part of the Epic of Gilgamesh that was illegally imported into the US.

The previous owner of the tablet, who consigned the work to Christie’s for sale, has been named in new court documents filed on 1 February as Joseph David Hackmey, an Israeli businessman and art collector. Hackmey has held positions on the boards of several museums and universities, including the Israel Museum and the Tel Aviv Museum.

Hobby Lobby also now alleges that Christie’s fraudulently sold it a 10th/11th-century hand-written gospel manuscript that was looted from a Greek monastery during the Second World War. The manuscript had entered the collection of the Museum of the Bible (MOTB), in Washington DC, founded and backed by the Green family, which owns Hobby Lobby. The MOTB announced in October 2020 that it will voluntarily return the rare manuscript to the Greek Orthodox Church later this year. Hobby Lobby’s lawyer Michael McCullough tells The Art Newspaper that his team had submitted a separate claim around that case, and was awaiting a response from Christie’s.

As for the consignor’s name, McCullough says his team had become aware of Joseph David Hackmey via disclosures from the US government’s forfeiture case against the sale of the clay tablet. Hobby Lobby alleges that Christie’s was aware of the tablet’s falsified provenance when it sold them the object for $1.67m in 2014, citing a phone call that allegedly took place between Christie’s head of antiquities in London, Georgiana Aitken, and an unnamed “American Dealer” who is believed to have imported the tablet to the US in 2003. Court filings by the US government also claim Christie’s knew the provenance was “not verifiable.”

But there is no evidence that Hackmey knew the provenance had been faked when he consigned the work for sale.

According to court documents filed by US authorities, which seized the tablet from the MOTB in 2019, the false provenance was put into a letter by an antiquities dealer in 2007 when he sold the tablet to a pair of buyers in the US. Hackmey came into possession of the tablet later. It is unclear whether Hackmey provided Christie’s with the false provenance letter, or whether he contacted the dealer to verify the provenance letter when he bought the object. It is also unclear whether Christie’s informed Hackmey after allegedly learning, before the sale, that the provenance was false. Hackmey could not be reached for comment.

A spokesperson for Christie’s tells The Art Newspaper that the auction house had relied on the falsified provenance provided by the dealer: “The plaintiff’s allegations against Christie’s are based entirely on the statements of a dealer, who has admitted that he lied repeatedly about his purchase of the Gilgamesh Tablet in 2003 to cover up his criminal conduct. Any allegation Christie’s had knowledge of the original fraud or illegal importation is false, and Christie’s will vigorously defend itself in this matter.”

With regards to the manuscript, the Christie’s spokesperson says: “Christie’s takes questions of ownership very seriously and we would never sell anything we know or have reason to believe to be stolen. We devote considerable time and money to investigating the objects in our care. All items are checked prior to sale against academic, police, civil, national and international lists of stolen or missing works and when we publish our catalogues we welcome scrutiny as well as any new scholarship or information that would help us ensure our information is correct.”

The details are the latest to emerge in a years-long scandal involving thousands of fraudulent acquisitions made by Hobby Lobby for the MOTB, which opened in 2017. To date, more than 10,000 objects from the young museum’s collection are in the process of being repatriated to Iraq and Egypt.