The auction house knew that the provenance of an ancient cuneiform tablet inscribed with the Epic of Gilgamesh was made up, lawsuit claims 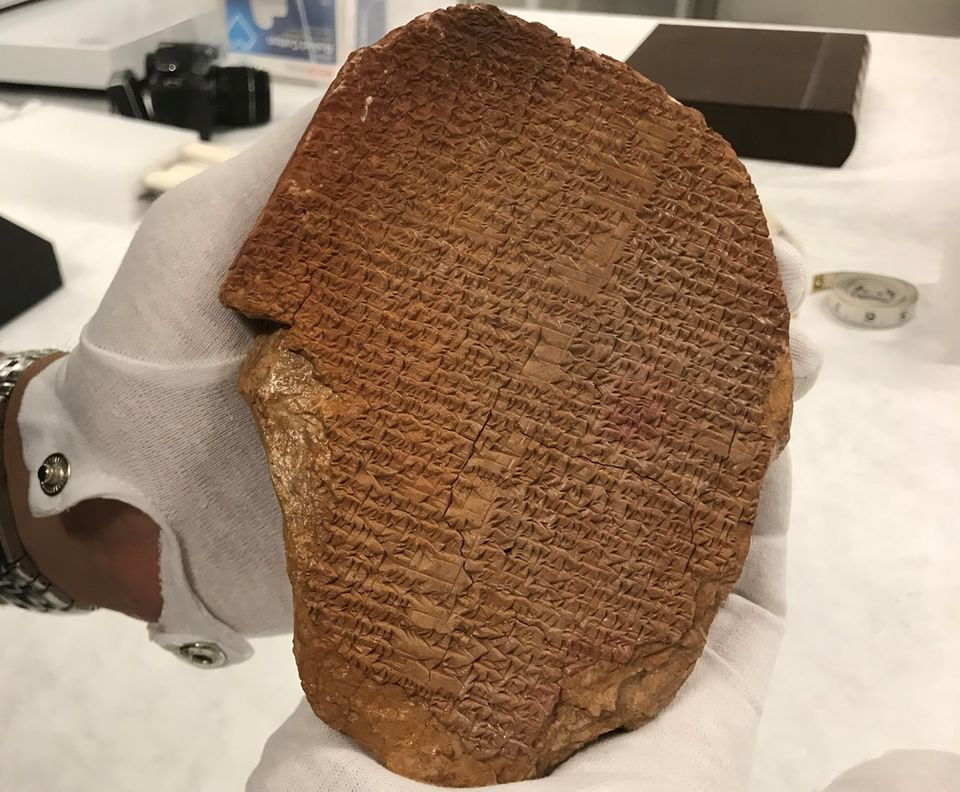 ICE’s Homeland Security Investigations (HSI) New York, seized a rare cuneiform tablet bearing a portion of the epic of Gilgamesh, a Sumerian epic poem considered one the world’s oldest works of literature, from the Museum of the Bible last year Photo: ICE-HSI

Hobby Lobby, the Oklahoma-based nationwide arts and crafts chain whose family owners founded the Museum of the Bible in Washington, DC, is suing Christie’s auction house for fraud and breach of warranty for selling it an ancient tablet, inscribed with part of the Sumerian Epic of Gilgamesh, which US authorities say has been looted. The lawsuit, filed today, claims that Christie’s offered assurances during a 2014 private sale that the consignor, who is only identified in the lawsuit as “a private art collector who resides in London”, was legally entitled to sell the ancient object, when the auction house knew its provenance was fake.

Hobby Lobby’s lawsuit follows conversations with federal authorities and a civil action taken yesterday by the US Attorney’s Office in New York to return the tablet to Iraq. Last September, agents from Immigration and Customs Enforcement of the Department of Homeland Security seized the tablet, which dates from 1600 BC, from the Museum of the Bible, claiming that the cuneiform had been stolen from Iraq and illegally imported into the US in violation of several statutes, including the 1934 National Stolen Property Act.

In a statement announcing the government’s move to return a piece of Iraq’s cultural history, Richard P. Donoghue, the US Attorney for the Eastern District of New York, notes that “in this case, a major auction house failed to meet its obligations by minimizing its concerns that the provenance of an important Iraqi artifact was fabricated, and withheld from the buyer information that undermined the provenance’s reliability.”

The tablet had been originally consigned to Christie’s through its London office in 2013, and was brought to New York the next year when it was privately sold for $1.67m to Hobby Lobby. In its communications with Hobby Lobby, the auction house said that the cuneiform had previously been sold by the San Francisco-based firm Butterfield & Butterfield in 1981, years before all imports into the US of cultural property from Iraq were banned following the first Gulf War in 1990. But during conversations earlier this year, government officials revealed to Hobby Lobby that this history was made up, according to the company’s lawsuit.

“In 2014 and again in 2017, Christie’s affirmed to Hobby Lobby that the Butterfield’s provenance was correct, that they had checked it and that it was accurate,” says Michael McCullough, the New York lawyer representing the company. “A dealer who had bought the tablet in 2003, reselling it in 2007, made up the Butterfield’s provenance”, in response to a request by a buyer for information on when the object had come out of Iraq, he says.

The dealer told Christie’s that "the provenance would not withstand scrutiny and should not be used in connection with a public sale", according to the US Attorney's complaint. Hobby Lobby has been cooperating with authorities following a $3m settlement in 2017. The company is seeking to recover the $1.67m it paid for the object from Christie's, along with interest and attorney's fees.

A Christie's spokeswoman says in a statement that “this filing is linked to new information that has come to light regarding an unidentified dealer’s admission to government authorities that he illegally imported this item then falsified documents over a decade ago, in order to perpetrate an illegal sale and exploit the legitimate market for ancient art. Now that we are informed of this activity pre-dating Christie’s involvement, we are reviewing all representations made to us by prior owners and will reserve our rights in this matter. Assertions within the filing that suggest Christie’s had knowledge of the original fraud or illegal importation do not comport with our investigation.”

Bonhams auction house, which acquired Butterfield & Butterfield in 2002, did not want to comment on the case.

More NewsTopicsLooted artMuseum of the Bible

about 3 hours ago
'Good reasons to believe this is a new Caravaggio': specialists cautiously vouch for €1,500 painting pulled from Spanish auction