Sweeping demonstrations are putting people off buying art, but relations with the US are likely to have a greater long-term effect 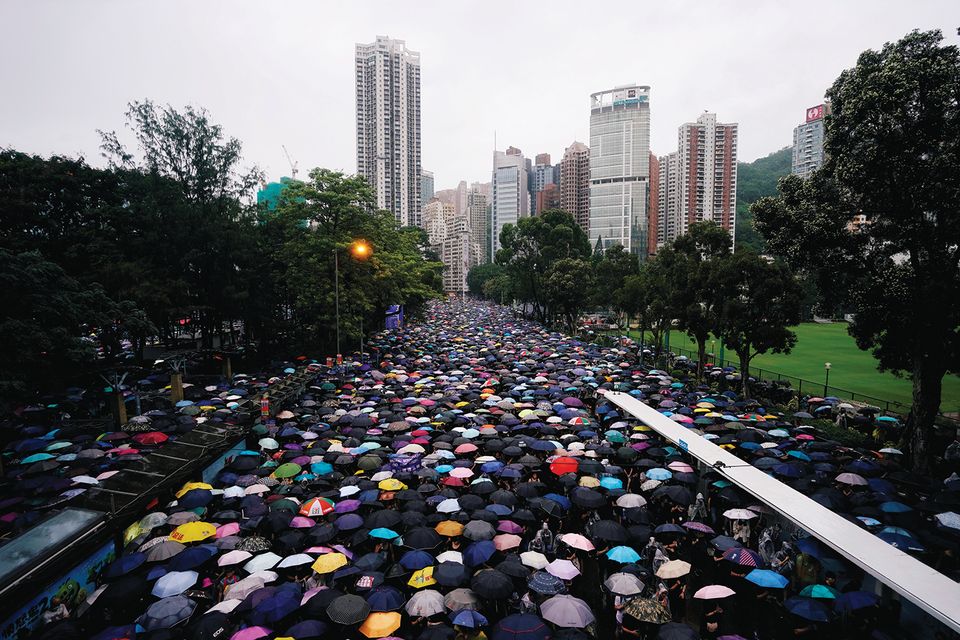 Weekend demonstrations have been taking place in Hong Kong since June, with protestors calling for the scrapping of a controversial extradition bill © Reuters/Aly Song

Hong Kong’s autumn sales are clouded by uncertainty amid a precarious economic outlook in the region brought by the China-US trade war and anxieties over the ongoing pro-democracy protests in the Special Administrative Region.

Auction houses in Hong Kong are striving to paint a rosy picture of the market but some local dealers say they are experiencing a slower summer than usual and expect a decline in autumn sales. They attribute this to clients either being away on holiday or being in no mood to look at art because of the growing protests that have gripped Hong Kong since June.

However, dealers believe that the impact of the Hong Kong protests on the art market is only short term and that the real factor that could dampen art sales in Asia will be the trade war between China and the US.

Sotheby’s Hong Kong and China Guardian (Hong Kong) will be holding their autumn auctions in the first week of October at the Hong Kong Convention and Exhibition Centre, but the dates are scheduled later than in previous years to avoid clashing with the 1 October celebration of the 70th anniversary of the founding of the People’s Republic of China. Fine Art Asia and Ink Asia fairs will also take place at the same venue coinciding with the art auctions.

Sotheby’s Hong Kong's autumn sales will run from 3-8 October. Despite the Hong Kong protests, Kevin Ching, the chief executive of Sotheby’s Asia, says the auction house is anticipating a strong season ahead. “We have had a strong response from global collectors to consign this season based on the strength of the art market in Asia,” Ching says.

Ching adds that Sotheby’s Hong Kong is still finalising its sales but the auction house has just released some of the highlights of their autumn auctions. A Beijing-enamelled pouch-shaped glass vase from the Qianlong period, which is expected to fetch more than HK$200m (US$25.5m) and Gillion Crowet’s collection of Chinese contemporary art. Thirty works including Smoke, one of Liu Ye’s largest paintings, will go under the hammer on 6 October. The collection is expected to fetch more than HK$73m (US$9m). China Guardian (Hong Kong) will be holding auctions between 5-8 October. Details of the sales highlights have just been released. These include Yoshitomo Nara's oil painting Midnight Vampire with a pre-sale estimate between HK$18-25m (US$2.3-3.2m) and Zhang Daqian's painting White Cloud Studio, which is expected to fetch HK$8-12m/ US$1.02-1.52m). Hu Yanyan, the president of China Guardian (Hong Kong), says the art market in the region in the past couple of years has not been as active compared with 2010/2011 when it peaked.

“When the market is active, it’s easier to get good consignments,” Hu says, comparing it with the same period around a decade ago. “It’ll require more effort to convince clients to sell their collection.” She did not comment on the impact of the Hong Kong protests.

France Belin, the president of Christie’s, Asia Pacific, says the Hong Kong autumn auctions on 22-27 November are scheduled to proceed as planned despite the protests. Shanghai sales will take place on 21 September, leading with Zao Wou-ki’s Voie Lactée – 09.11.1956, a 1956 painting from the artist’s “oracle-bone” period.

“We will continue to monitor circumstances and have processes in place to ensure business runs as normal,” Belin says.

Hong Kong’s protests have been going on for more than two-and-a-half months but the government still refuses to respond to the protesters’ five demands, including the complete withdrawal of the extradition bill that could send suspects to jurisdictions including mainland China to stand trial, establishing an independent probe to investigate the police’s use of excessive force and universal suffrage for the city’s leader and Legislative Council, which was promised to Hong Kong when the city was handed over from Britain to China in 1997.

The escalation of violence from both the police and protesters has been affecting some people’s mood to buy art, but the international nature of Hong Kong’s art market means that the slowdown of China’s economic growth and the US-China trade war are key factors contributing to the uncertainties in the market.

Latest figures show that China’s economic growth has slowed to 6.2% in the second quarter, nearly a 30-year-low. Industrial production saw growth of 4.8%, the weakest increase in 17 years, Reuters reports. The China-US trade war has also started biting Hong Kong's economy, with the second quarter of the city's GDP growth went down to 0.5% year-on-year. The prospect of autumn is unlikely to improve as a new round of tariffs are due to take effect on 1 September and Hong Kong protests show no sign of cooling down.

One dealer speaking under the condition of anonymity says that mainland Chinese collectors have been tightening their purse strings since China’s anti-corruption campaign, and that the detoriorated economic outlook means that buyers will be more cautious, particularly in the categories of fine Chinese paintings and works of art. Blue-chip 20th-century paintings are likely to remain steady, the dealer says.

“Contributions from Japanese and Southeast Asian collectors to our sales have seen a more than six-fold increase from 2012 to 2018. Sales to collectors from Taiwan have been up by 4.7 times during this period,” says Hu of China Guardian (Hong Kong).