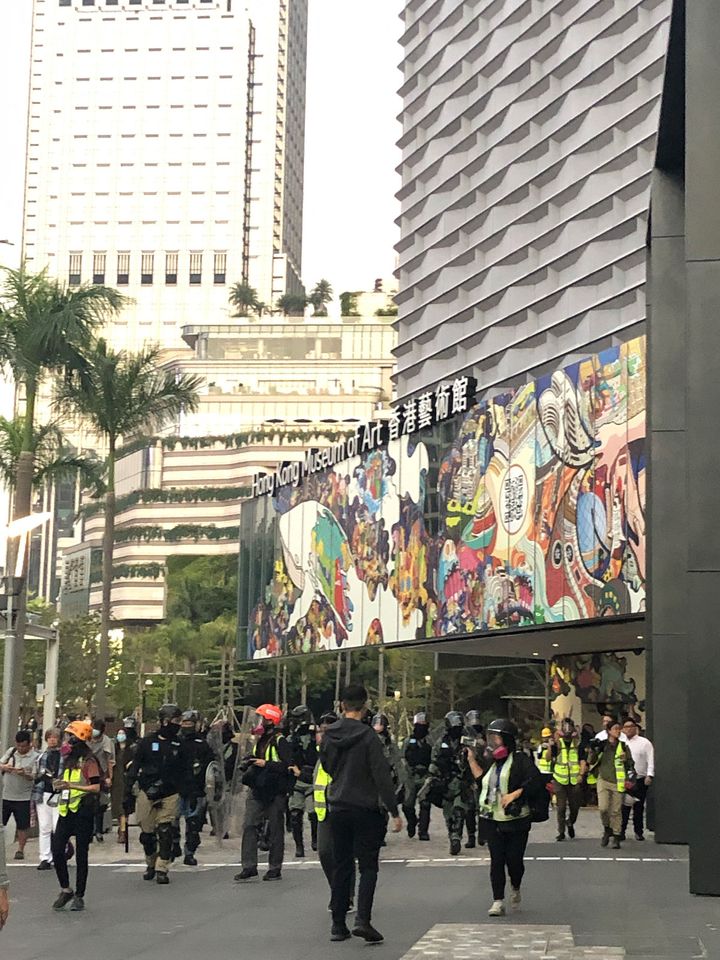 Riot police ordered those outside HKMoA to leave or risk being arrested for illegal assembly Image: © Vivienne Chow

Hong Kong police deployed tear gas during a protest yesterday that took place close to the city’s Museum of Art (HKMoA) just one day after it reopened its doors to the public. The use of tear gas at the museum, which re-opened after a three-year renovation with a travelling show from the Tate, prompted concerns over whether the police's wide use of the substance is putting important works and museum visitors at risk.

Tens of thousands of people took part in a rally in Tsim Sha Tsui district on Sunday calling for the government to meet their “five demands”—which includes the implementation of universal suffrage promised in the city’s mini-constitution, the Basic Law—despite the pro-democracy camp’s landslide victory at the District Council elections on the previous Sunday. Organisers planned for a peaceful protest with a route passing by the government-run HKMoA and art mall K11 Musea, founded by the mega collector Adrian Cheng. They received a letter of no objection from the police, which allowed the rally to take place between 3pm and 6pm.

But at around 4pm, the police started firing tear gas into the crowd on Salisbury Road next to Art Square, a public art park located by the entrance of HKMoA. Some members of the crowd, a mix of the elderly, children, parents as well as young people, fled towards the museum building. It was uncertain if the museum allowed people to seek refuge in the building, which already had a notice on its door stating that it would close early. Riot police then declared that the rally had ended and anyone gathering outside HKMoA could be subject to arrest for “illegal assembly”.

“It was all peaceful and we walked towards Hung Hom. Then the police blocked the road and we had to head back here, and now we just got tear-gassed for no reason,” said one female protester in her 50s standing outside HKMoA.

A video clip posted online shows police opening the doors of one side entrance of K11 Musea and pepper-spraying people inside. 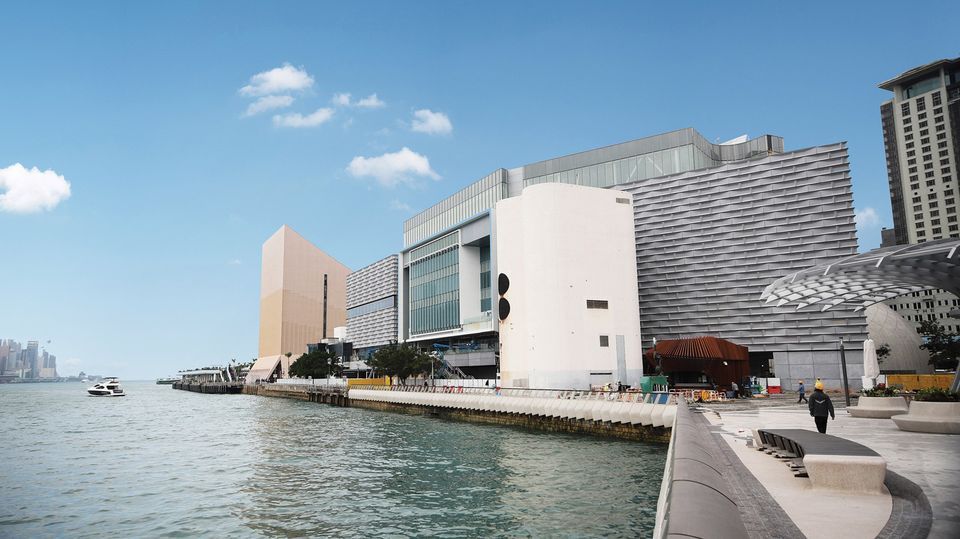 The HKMoA opened to the public on 30 November with 11 exhibitions featuring some of the most important collections of works from the region, including paintings by the late 20th-century master Wu Guanzhong, who donated an important body of work to the museum, Chinese ink paintings dating back to the Ming dynasty from the Chih Lo Lou Collection, some of the oldest visual records of Hong Kong from the Charter collection, landmark works of Hong Kong’s New Ink Movement, as well as landscape paintings by J.M.W. Turner, John Constable, and the largest work by David Hockney on loan from the Tate.

It was not the first time that the police has fired tear gas near cultural institutions. During the battles of the siege of Polytechnic University in mid-November, the Museum of History and the Science Museum, both government-run, were affected as police fired tear gas canisters and rubber bullets nearby. Both museums were closed early.

Clarisse Yeung, the newly elected district councillor who studied fine art at the Chinese University, says the police’s arbitrary use of force is not only putting human lives at risk but also cultural treasures. She says there are no escape routes for visitors at these cultural venues as public transport is suspended. Tear gas, she says, can contaminate the institutions’ ventilation systems. The police has already fired over 10,000 tear gas canisters since June when the pro-democracy protests began after being sparked by the now-withdrawn extradition bill.

“Temperature, humidity and acidity of the air can affect the preservation of the artworks. The police and the government still refuse to publicise the ingredients of the tear gas. This is getting out of control. We cannot afford the damage of these cultural treasures because of the government’s incompetence in resolving a political crisis,” Yeung tells The Art Newspaper.

Clarisse Yeung, the newly elected district councillor who studied fine art at the Chinese University, has urged police to stop using tear gas because many people are already suffering from the side effects and residues of tear gas.

A government spokesman tells The Art Newspaper that HKMoA was not affected by tear gas and that the museum remained open until 6pm. The spokesman added that cleaning of the Museum of History and the Science Museum and their ventilation systems has been completed. HKMoA welcomed a total of 4,827 visitors during its first weekend after re-opening.

The police said that tear gas canisters were fired because a group of protesters was seen hurling smoke bombs. Some reporters on the ground and rally participants, however, said they did not see such smoke bombs.