The gallery community has encouraged strike action, with many closing to enable staff to join protests 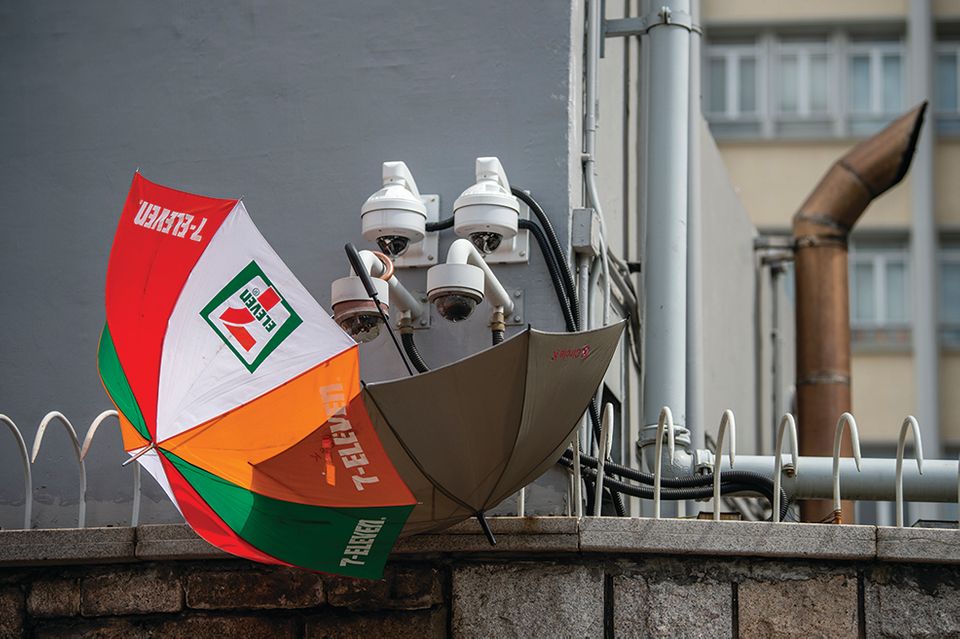 Hong Kong’s protests show no sign of abating. Today, thousands of demonstrators are shutting down government offices to call for the secretary for security John Lee and the police commissioner Stephen Lo to step down over police brutality towards protesters. They join the ongoing calls for the resignation of the chief executive Carrie Lam; the full withdrawal, rather than tabling, of the unpopular Mainland extradition law; and for the classification of the 12 June protests as a riot to be rescinded. The bill’s detractors fear it will result in Hongkongers being extradited to China for political infractions. Two million people protested on 16 June—nearly 30% of the Special Administrative Region’s 7.3 million population—and many of Hong Kong’s artists, curators and dealers have joined the demonstrations against the law and the tightening grip of mainland China that it represents.

“My artists are too political. I cannot stand by and do nothing while the government threatens my profession, my staff and my artists,” says Ben Brown Fine Arts' managing director Amanda Hon. “It is not for me, but for them. How can I, in clear conscience, say I support my artists if I do not stand up for what’s right? Freedom of speech affects not only our profession but threatens the very foundation of art.” Hon describes marching on 12 June alongside William Shung from Pearl Lam Gallery, and seeing Para Site director Cosmin Costinas. All three were teargassed, part of police brutality that also involved rubber bullets and bean bag cannons, and hospitalised a reported 76 protesters.

Artists have been a driving force behind the demonstrations. “I am happy to see that there is still freedom of speech and people can express their political opinion freely at this moment,” says Wong Ka Ying, a local artist and cofounder of the 300-member Hong Kong Artists Union. “After all, freedom of speech is the most important thing in creativity and the making of art.” Wong says she knows of “over 150” artists who have protested “but there must be lots more”. The union joined the demonstration on 9 June, "making props and distributing them during the protest. We also joined, signing the petition letter of the art and cultural industry”, urging the government to withdraw the extradition law. “We then called for a strike among Hong Kong artists, galleries, cultural organisations and institutions, asking them to shut their doors and free their staff to join the demonstrations on 12 June after receiving no response from the government after 9 June.” 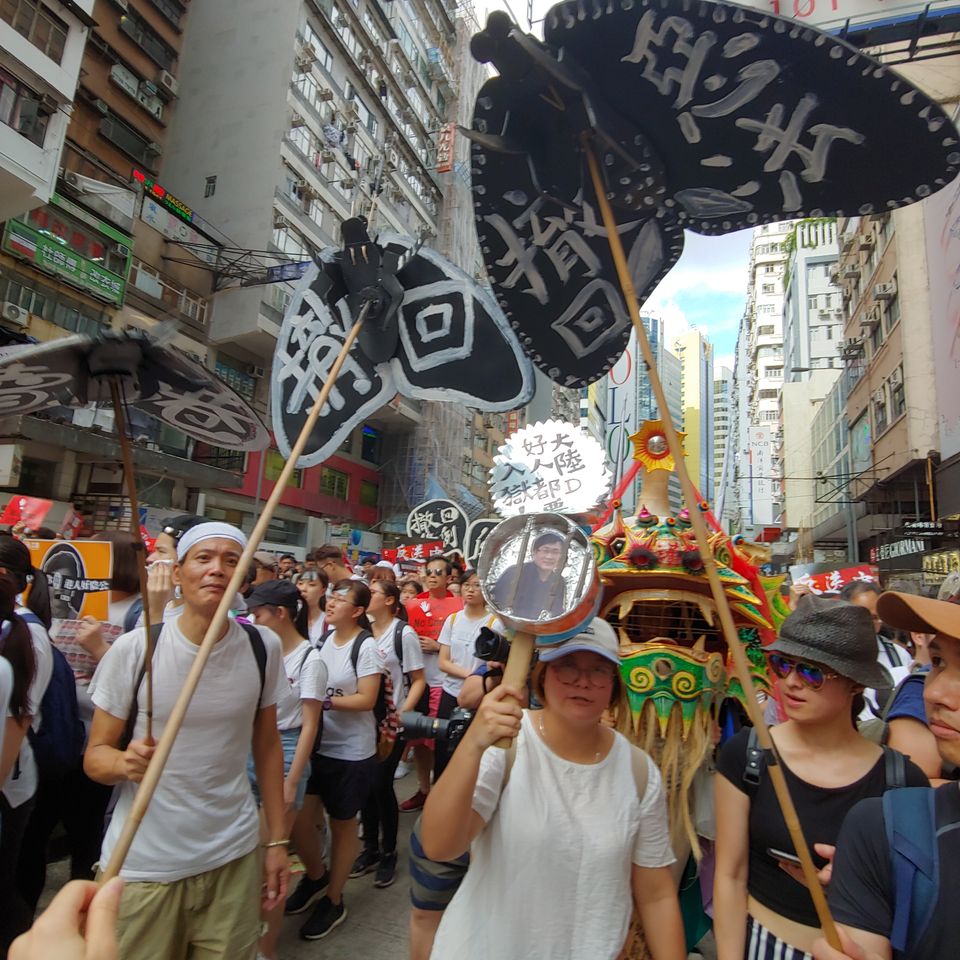 Many of Hong Kong’s galleries and nonprofits shut their doors to allow participation in the 12 June protest, which drew around a million people and, unlike the major marches on 9 and 16 June, fell on a weekday. Para Site and Asia Art Archive closed, and Tai Kwun Contemporary closed its ticketing and operated with minimal staff. Galleries including Ben Brown, Ora-Ora, 10 Chancery Lane, Gallery Exit, Tang Contemporary, Pearl Lam, Simon Lee, Lehmann Maupin, de Sarthe, Rossi & Rossi, Massimo De Carlo and Angela Li also closed for the day.

The gallery community was active in encouraging people to strike. Gallery Exit was the first to announce plans to close over Facebook, Hon describes. “The night before I called the galleries to ask if they were shutting. I had just finished an HKAGA [Hong Kong Art Gallery Association] meeting. I'm new to the board. I asked whether they were shutting at the meeting and asked what we were going to do as the association. Of course we cannot speak for all galleries, but I decided to shut mine. Later that day I spent hours calling galleries to see if they were going to shut down on Wednesday as a strike.”

The Hong Kong Artists Union has continued to participate in the protests, holding sketching workshops around the government headquarters. A group of ten Hong Kong artists did a sit-in protest at Star Ferry Pier but were interrupted by more than 30 police officers. Another team from the union is archiving “protest materials, including drawings, articles, props, t-shirts, VR videos and sounds that are created by Hong Kong artists during this week” to be included in the forthcoming Para Site exhibition Bicycle Thieves, organised by the young mainland curator Zhang Hanlu and opening on 29 June (until 1 September).

Artists’ involvement in the protests shows how much Hong Kong stands to lose, compared with the culturally cosseted mainland. “Hong Kong does not have a censorship bureau for art, so Hong Kong remains very open,” says Katie de Tilly, the owner of 10 Chancery Lane Gallery. “There are laws about nudity, or indecency, but no one goes around checking. People are free to express themselves here. We don’t feel the government watching us. Sure, there is some watching, but it is not part of the landscape like in China.” She stresses that this movement is distinct from 2014’s Occupy Central, also known as the Umbrella Movement, for its specific goals and broad appeal. “It has been peaceful for the most part—and it's not just students, but people of all ages.”

Hon predicts that the protests’ momentum will not wane until the extradition bill and a rule to prohibit “disrespect” of the mainland national anthem are defeated. She anticipates an even greater swelling of numbers for the annual 1 July march commemorating Hong Kong’s handover from British control to mainland China. Henrietta Tsui-Leung, a founder of Ora-Ora Gallery and the founder of the HKAGA, predicts that the mass participation of young Hongkongers means that “Hong Kong art is going to be super interesting. I have encouraged many people to collect Hong Kong art from the new generation; I am going to build an interesting one for myself as well. The sight of peaceful demonstration is respectable and I am very proud of Hong Kong people.”

“I think this is going to be a long journey; artists must hold fast to our post and fight for every inch of progress, so as to continuously expand the room for democracy and eventually create the utopia that artists always strive for,” says the artist Wong Ka Ying, who was born in 1990 and is part of that rising generation. “I am so afraid of a backlash, to be honest, but we have no choice.”