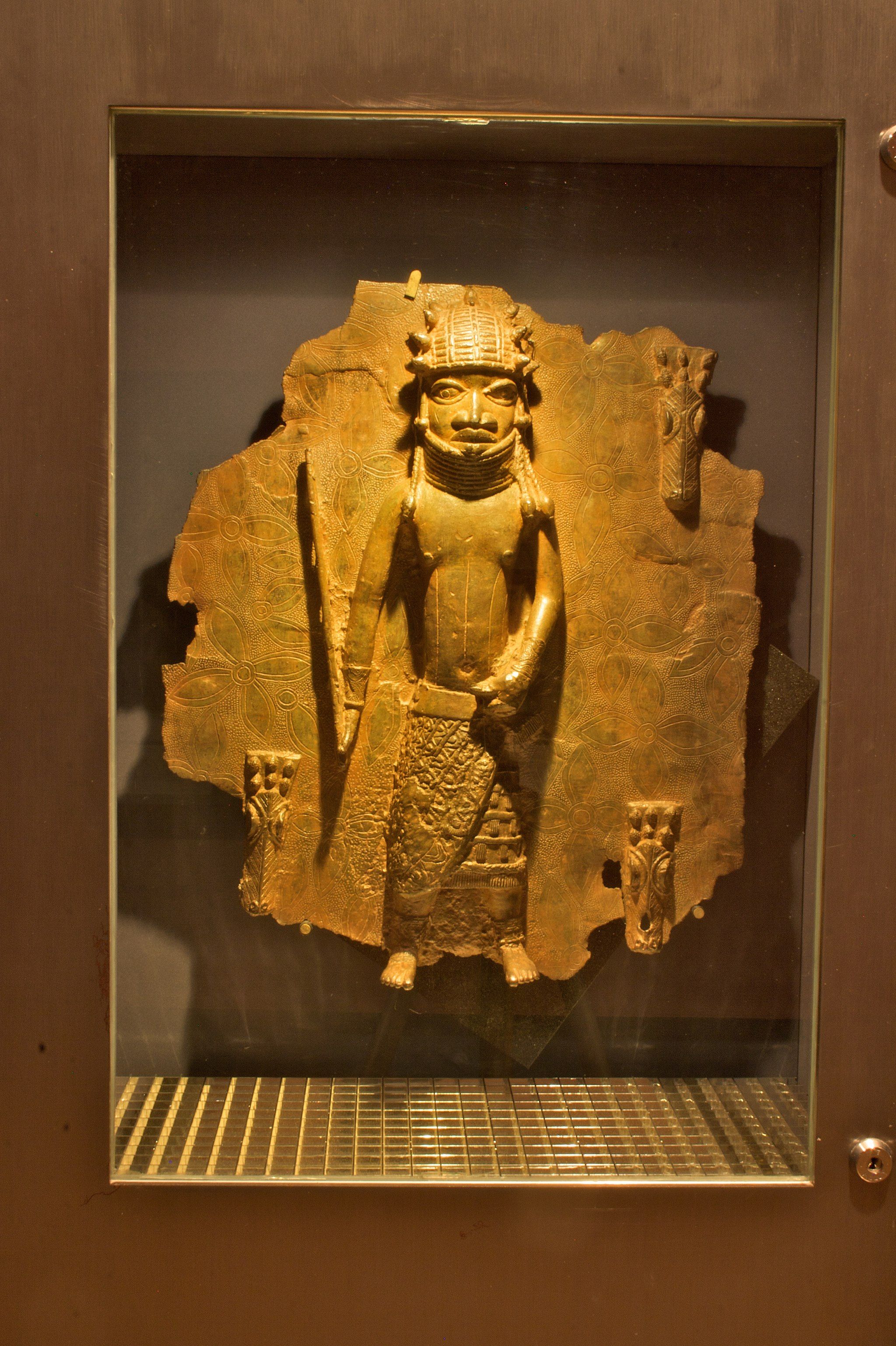 A Benin bronze at the Horniman Museum in south London Photo: Mike Peel

Could the trickle of museums pledging to return looted art to Africa grow into a flood? Another UK museum says it will now consider restituting objects in its collection seized from Benin City, according to the Daily Telegraph. In a new policy document, the Horniman Museum and Gardens in south London sets out “transparent policies and procedures by which communities [in Africa] can enter into discussion with [the museum] about the future of this material, including its possible return”. The museum owns 49 works from Benin City including 15 brass plaques, weapons and jewellery.

In the new document that was approved last month, the museum says its trustees recognise that “occasions will arise when it will be appropriate to enter into discussions with stakeholders about the potential restitution or repatriation of cultural objects and human remains which are in its collection and were acquired by force or other forms of duress, by theft, or were communal property which was acquired from a person not authorised to give it.” Discussions around disputed items will be held on a case-by-case basis.

Nick Merriman, the chief Executive of the Horniman Museum, says: "The Horniman’s position on any returns, including the future of its collection of objects from Benin City, is laid out in our Restitution and Repatriation Policy, published on our website. The policy sets out a clear procedure for repatriation claims and includes a commitment to sharing information and transparency of process. The Horniman has, at the time of writing (7 April 2021), received no repatriation requests which means that no definitive decision has been reached, nor even yet considered, about repatriation of any object."

Following a British naval attack at the end of the 19th century, thousands of Benin bronzes—brass plaques and sculptures depicting the royal court of Benin City, in modern day Nigeria—were pillaged and subsequently ended up at some of the most prestigious museums and private collections in the world. Last month, Aberdeen University agreed to return to Nigeria a sculpture looted by British soldiers.

For some communities, the “retention of some specific objects... is experienced as an ongoing hurt or injustice”, adds the policy document. Early last year the museum consulted Nigerians based in London about the future of the Benin bronzes. But a strict procedure applies at the Horniman Museum regarding formal requests for restitution including the “reasons why a return to the community of origin is considered appropriate”, says the policy document.

“We may also need advice about whether we have the legal right to return the cultural artefact (for example we need to be able to demonstrate that we own it and it is not on loan from another owner). In many cases the advice of the Charity Commission will need to be sought,” says the museum.

The British Museum in London, which holds more than 900 Benin objects, and other national institutions such as the Victoria & Albert Museum are prevented from permanently returning items by the British Museum Act 1963 and the Heritage Act 1983. Regional museums in the UK, which are not bound by such legal constraints, can in theory return objects more quickly.

"In the absence of the legal restrictions currently faced by the national museums, in dozens of other collections across the UK questions of procedure and process for restitution are being addressed so that permanent and unconditional returns can be made on a case-by-case basis," says Dan Hicks, a curator at the Pitt Rivers Museum and a professor of contemporary archaeology at the University of Oxford. "Decisions typically rest with trustee bodies, as we have seen in the case of Aberdeen University and Jesus College, Cambridge. The question of restitution used to be depicted as the domain of activists pitted against museum staff. Now museum professionals are taking the necessary steps to expand long-established returns policies for human remains, or in cases of Holocaust spoliation, to encompass the return of cultural objects."

about 9 hours ago
Discovered: American couple buys a picture by Van Gogh’s friend Edmund Brooke for $45 in antiques shop