Bipartisan letter to budget committee urges an increase in funding

Bipartisan support continues to mount for the National Endowment for the Arts, which the Trump administration targeted for the axe along with 18 other independent agencies in its first budget proposal. More than 150 members of the House of Representatives, including 11 Republicans, have signed a letter urging an increase to the agency’s funding from around $148m to $155m in 2018. 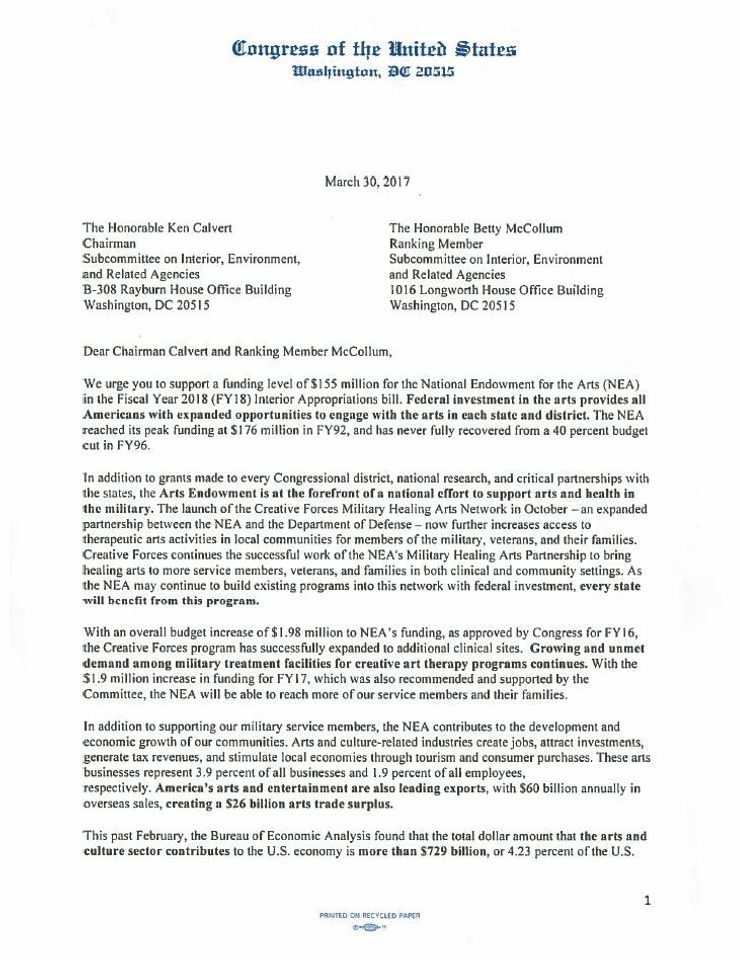 Thirty-two members of the House of Representatives, including 11 Republicans, have signed a letter urging an increase to the agency’s funding from around $148m to $155m in 2018.

“Federal investment in the arts provides all Americans with expanded opportunities to engage with the arts in each state and district,” the letter states. It highlights in particular the agency’s role “at the forefront of a national effort to support arts and health in the military” through its Creative Forces Military Healing Arts Network, which helps service men and women, veterans and their families. “As the NEA may continue to build existing programs into this network with federal investment, every state will benefit,” the letter states.

Earlier this month, retired Army general Stanley McChrystal, who led US forces in Afghanistan, wrote an op-ed for the New York Times urging the government to spare Public Broadcasting, another agency on the chopping block. “Public broadcasting makes our nation smarter, stronger and, yes, safer,” McChrystal wrote. “It’s a small public investment that pays huge dividends for Americans. And it shouldn’t be pitted against spending more on improving our military. That’s a false choice.”

The letter also focuses on the economic benefits of the arts. “This past February, the Bureau of Economic Analysis found that the total dollar amount that the arts and culture sector contributes to the US economy is more than $729 billion, or 4.23% of the US Gross Domestic Product, more than construction ($672bn) or transportation and warehousing ($510bn),” the letter states.