Delayed by just three weeks amid the pandemic, new Kinder Building will dramatically increase space for Modern and contemporary art 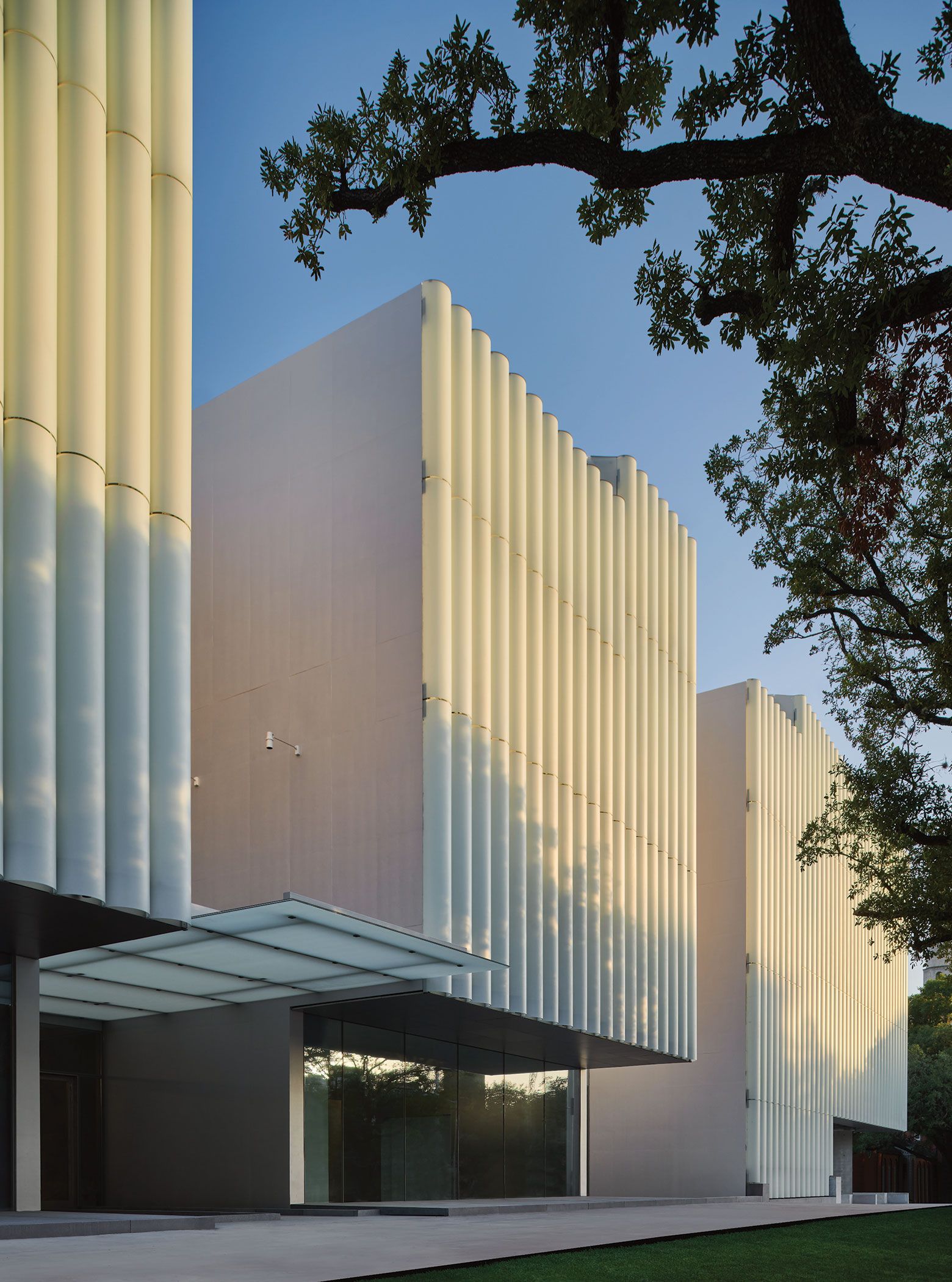 The Nancy and Rich Kinder Building at the Museum of Fine Arts, Houston Photo: Peter Molick

After months of mini-crises ranging from delays in materials to frantic hurricane preparations, the Museum of Fine Arts, Houston (MFAH) is set to open the crowning element in its ambitious $450m expansion: the Nancy and Rich Kinder Building, devoted to the institution’s deep holdings in Modern and contemporary art.

Opening its doors on 21 November, the new structure was designed by Steven Holl Architects, which also created the 2012 master plan for the expansion of the museum campus. With more than 100,000 sq. ft devoted to galleries, the building increases the museum’s overall exhibition space by nearly 75%.

The trapezoidal concrete building is notable for its porosity, with seven gardens slicing the perimeter: standing in the voluminous new entrance lobby, a visitor can see oases in all directions. The structure is clad in vertical glass tubes that will emit a soft glow at night and is topped by a luminous canopy with concave curves that will allow natural light to slip through in rounded slices and illuminate galleries radiating from an atrium. 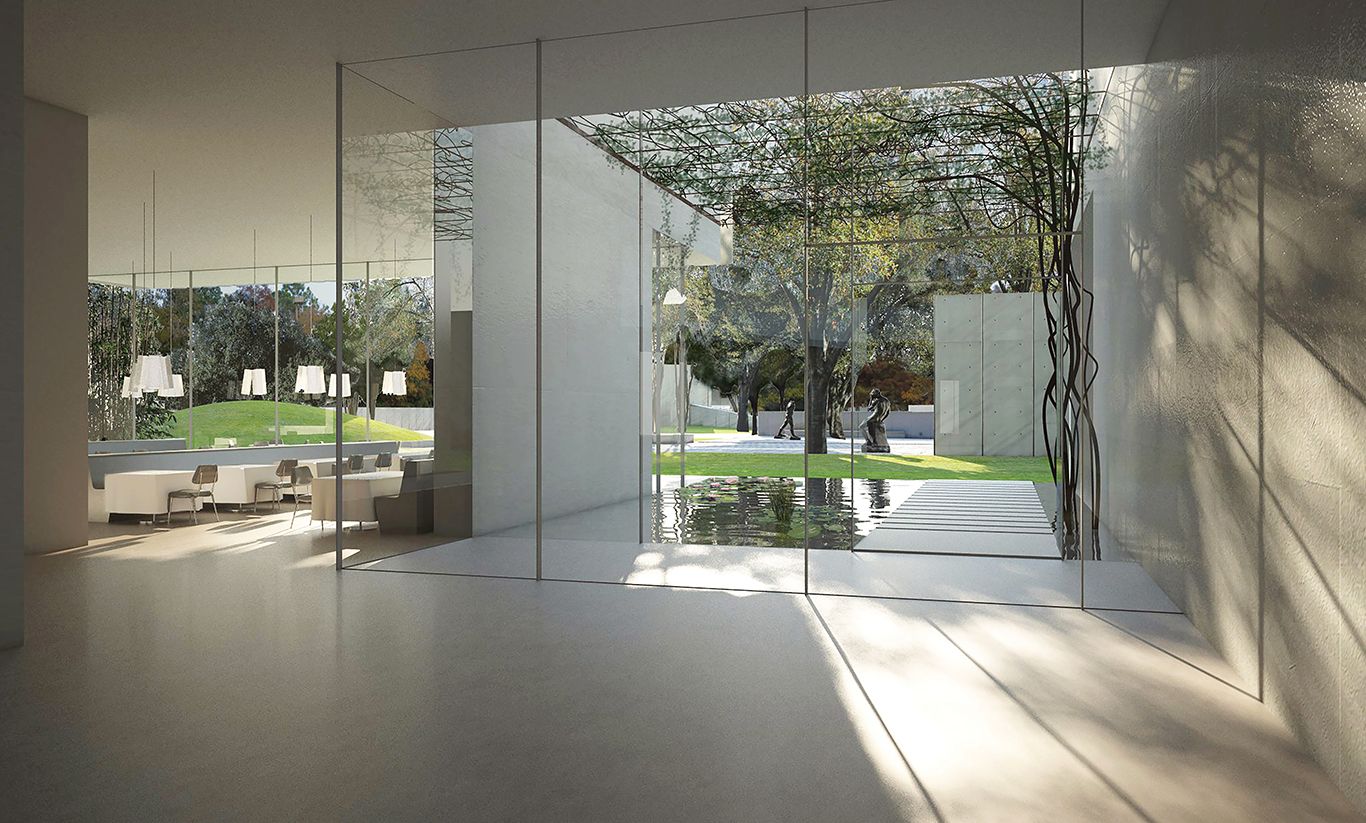 Holl says his design was inspired by the Texas sky. “Concave curves, imagined from cloud circles, push down on the roof geometry, allowing natural light to slip in with precise measure and quality—perfect for top-lit galleries,” he says. “The undersides of the curved ceiling become light reflectors, catching and sliding the light across each unique gallery experience.”

Five rectangular courtyard pools are inset along the building’s perimeter, underlining the sense of openness. And the ground floor will eventually remain open past museum hours, allowing visitors to traipse to a restaurant and to a 200-seat auditorium below street level for films and lectures. (When the building opens, both will be closed because of Covid-19 concerns.) 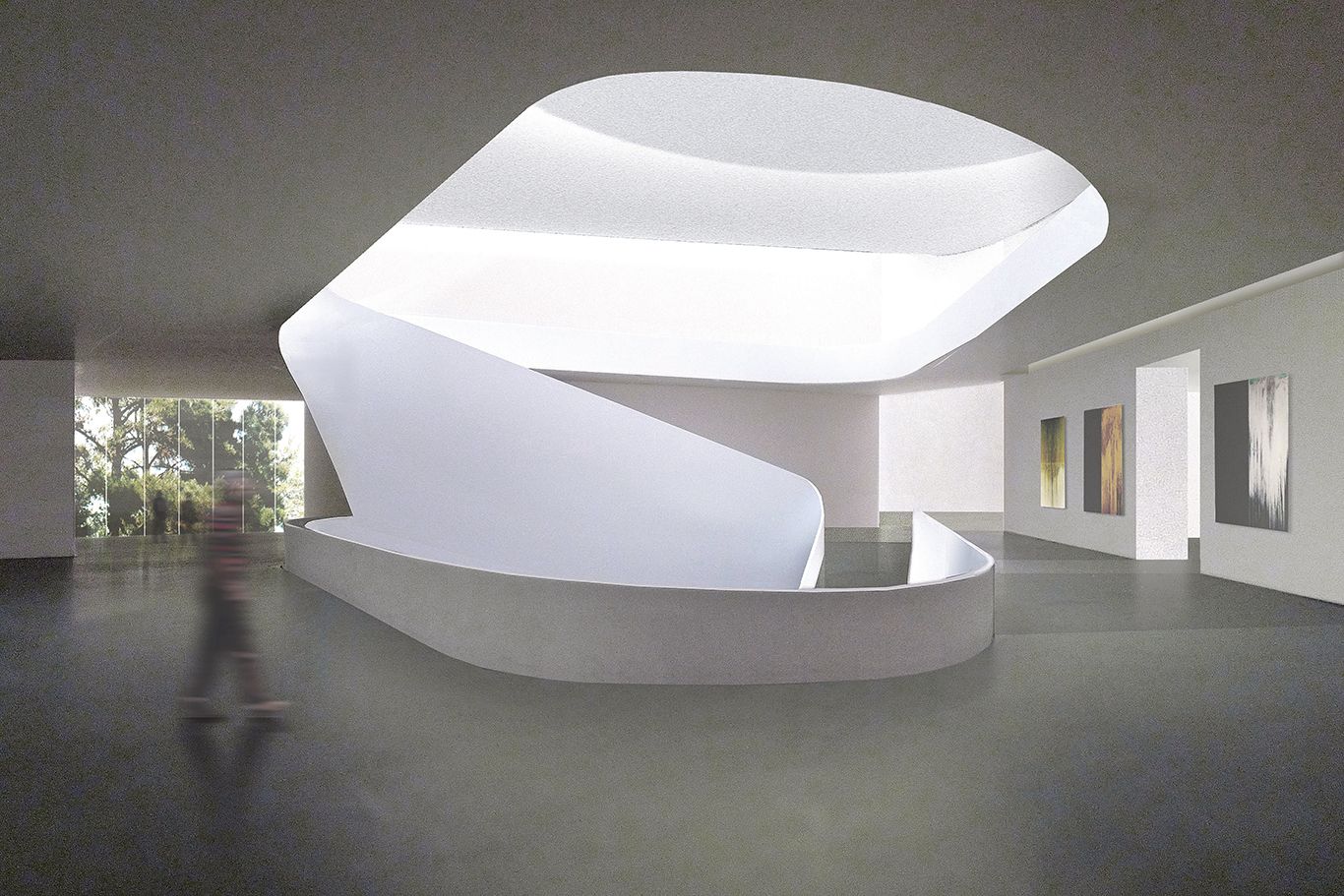 That its opening was delayed by just three weeks from its 1 November 2020 target date is a remarkable achievement, says the museum’s director, Gary Tinterow. In an interview, he describes a series of workarounds in response to glitches related to the coronavirus pandemic, like the museum’s French oak flooring becoming stranded in shipping containers in Le Havre for three months and therefore developing mould; delayed shipments of steel from Germany and glass from China; and US visas being denied to crucial workers from abroad.

“Everything that could go wrong has gone wrong, and yet we’re opening,” Tinterow says.

Among other snafus, the museum had to undergo emergency sandbagging preparations as Hurricane Laura rushed toward the coast in late August. Operations personnel were mindful of how Hurricane Harvey dumped millions of gallons of water on the construction site in 2017, turning it into “Lake Kinder”, as Tinterow puts it. With Laura, “we dodged a bullet”, he says, noting that this hurricane spared Houston.

Two pedestrian tunnels will link the Kinder Building to the museum’s Caroline Wiess Law Building across the street and to the Glassell School of Art, which was also designed by Holl and completed in 2018. The first will feature a series of three chromatic chambers by the artist Carlos Cruz-Diez. The other tunnel installation, by Olafur Eliasson, will employ 19 light fixtures to immerse the viewer in a live-action, alternately yellow- or purpled-tinted, film.

The museum broke ground on the building in 2017. It is the third gallery building to rise on the campus, after the Law Building designed in the 1920s by William Ward Watkin, with later extensions by Ludwig Mies van der Rohe, and the Audrey Jones Beck Building, designed by Rafael Moneo.

A flexible black-box gallery at the Kinder Building’s street-level entry will be devoted to three inaugural installations, Gyula Kosice’s utopian vision for architecture in outer space, The Hydrospatial City; a light-filled environment by James Turrell; and an Infinity Light Room by Yayoi Kusama. A windowed gallery facing the street will include nine kinetic sculptures by Jean Tinguely acquired by the museum in the 1960s as well as works by like-minded artists. 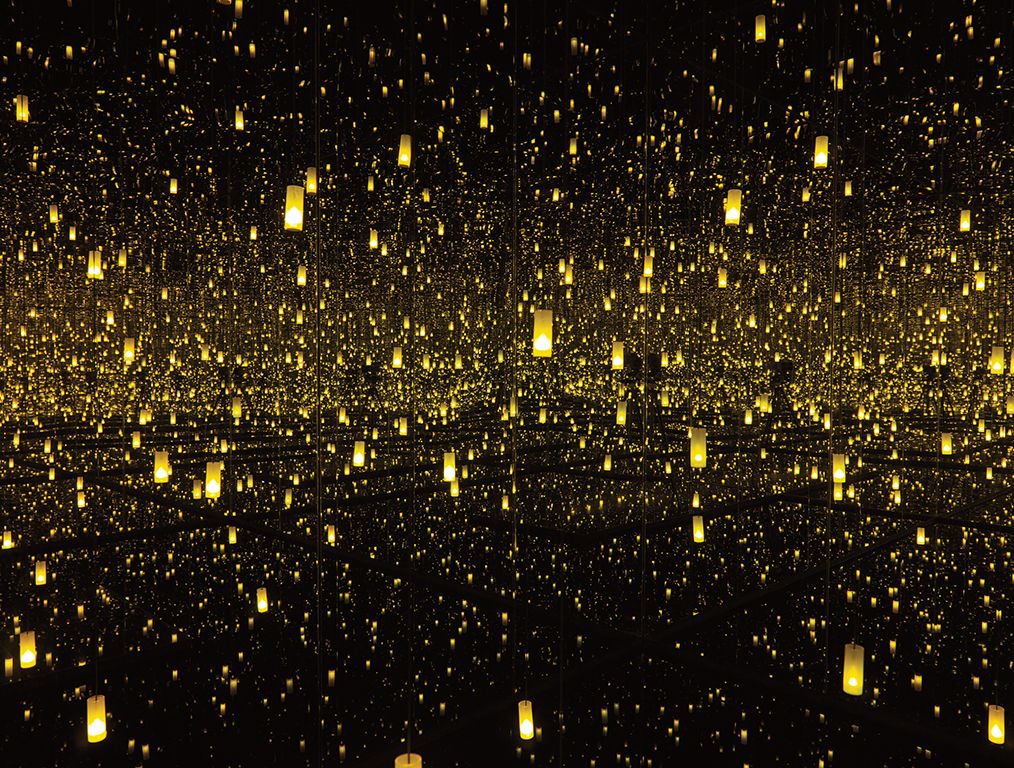 Galleries on the first storey will be organised by curatorial department. One will survey European and American Modernism from 1910 to the 1970s, from Matisse, Picasso and Georgia O’Keeffe to Robert Rauschenberg, Andy Warhol and Alice Neel, as well as works outside the historical Modernist canon by the Texas artists Forrest Bess, John Biggers and Dorothy Hood. A gallery devoted to Latin American art will include the first presentation in more than a dozen years of the Adolpho Leirner Collection of Brazilian Constructive Art as well as paintings, wood constructions and decorative arts by Joaquín Torres-García and the School of the South, among other works.

First-storey galleries will also display Modern and contemporary prints and drawings, decorative arts craft and design from 1890 to today and works of photography from 1840 to the present, including video and time-based media.

The museum takes a cross-departmental approach on the second floor, exploring themes in contemporary art since the 1960s: Collectivity, delving into ideas about community; Colour Into Light, including works by artists exploring colour dynamics, neon and transparency; LOL!–which Tinterow expects will be a crowd-pleaser, featuring artists who deploy humour; Border, Mapping, Witness, reflecting on borders as a psychological boundary fraught with violence; and Line Into Space, devoted to works that free the line from the burden of representation.

Eight site-specific works will also be inaugurated across the campus at the opening, including the tunnel installations by Cruz-Diez and Eliasson and art by El Anatsui, Ai Weiwei, Byung Hoon Choi, Trenton Doyle Hancock, Cristina Iglesias and Jason Salavon.

Holl says he strove to achieve a balance between the dazzle of the architecture and the strengths of the collection. “Today, we see two types of art museums: the white box, where the building can suck the life out of the art, or the expressionistic form, where the complications of the geometry overshadow the art,” he says. “We are interested in a third way: where the spatial energy of the architecture is inspiring, while the primacy of art is engaging.” 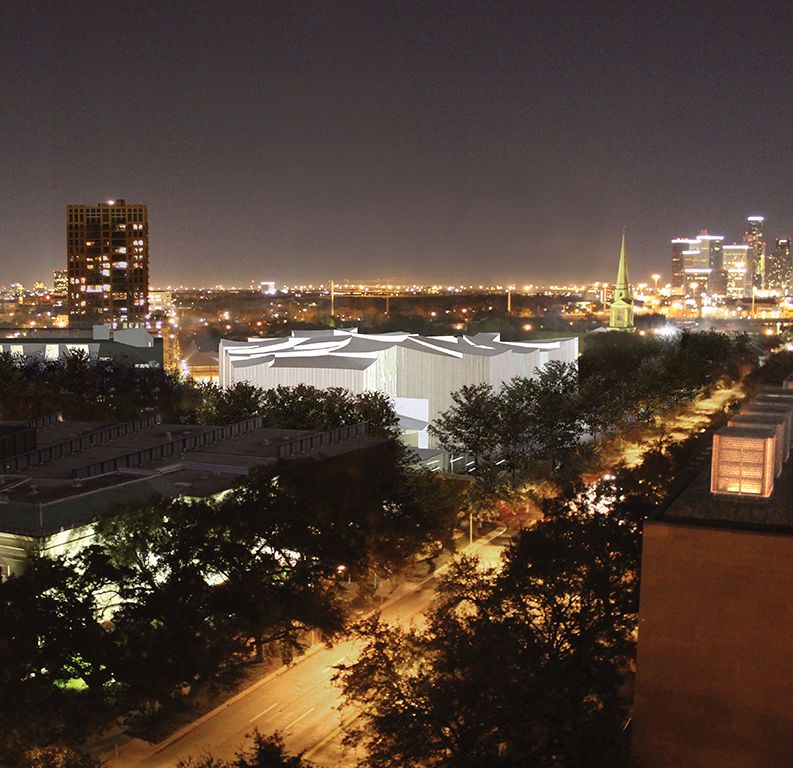 The Nancy and Rich Kinder Building at the Museum of Fine Arts, Houston Courtesy of Steven Holl Architects

The MFAH raised eyebrows by ending its coronavirus closure on 23 May, months before many American museums. Tinterow emphasises that temperature checks will be conducted for visitors to the Kinder Building as elsewhere in the museum, while funnelling them through two of the five available entrances. “The main thing is, for ten weeks we’ve been Covid-free among our tested staff, and that is terrific,” he adds.

Moreover, Tinterow notes, the expansion is fully funded despite the economic downturn precipitated by the pandemic. Of the $450m initially sought for the capital project, the museum has raised $475m, he says; not a single donor reneged, and nearly all of the donations came from Houston, he adds.

The overall multi-year expansion is described by MFAH as the largest current cultural project in North America, involving new construction of 650,000 sq. ft, including the 39,000 sq. ft Sarah Campbell Blaffer Foundation Center for Conservation as well as the 93,765 sq. ft Glassell School of Art.

Free admission to all three of the museum’s gallery buildings will be offered on 23 and 24 November, with the Kinder Building extending that to the 25th as well.

An earlier version of this article included an outdated description of the Covid testing situation at the MFAH from the print edition. When the museum’s director, Gary Tinterow, said that the institution’s tested staff members had been “Covid-free” for ten weeks, he was speaking on 2 October, not immediately prior to online publication of this article.