Houston show looks at racial injustice from a white perspective

The Houston Museum of African-American Culture is courting controversy with an exhibition opening Friday, 13 November, on the topic of racial injustice—featuring a roster entirely made up of white artists.

Among the works to go on view in The Abolitionists: Different Eyes Seeing the Same Reality is an installation that drew heated criticism this past summer when it appeared at the Guichard Gallery in Chicago. Angelitos Negros, by the New Orleans-based artist Ti-Rock Moore, includes a life-size replica of Michael Brown—the black teenager who was killed in Ferguson, Missouri, in 2014—positioned face-down on the floor and surrounded by police tape. “Moore’s ‘art’ is not original; it is a crude plagiarism of [police officer] Darren Wilson’s brutality, nothing more,” wrote the cultural critic Kirsten West Savali on the website The Root in July.

Moore says critics took her work out of context by focusing exclusively on the body and not the other elements of the project, like the music. “What gives this installation most of its force is the beautiful and fierce Eartha Kitt singing the racially evocative song ‘Angelitos Negros’”, she says.

“Part of the goal of The Abolitionists is to ask why more people who are not black are not stepping up like Ti-Rock. Where are our Peter Normans today?” says John Guess, the museum’s chief executive and curator of the show, referring to the white Australian athlete who stood in silent support next to the two African-American track stars Tommie Smith and John Carlos when they accepted their medals with a Black Power salute at the 1968 Summer Olympics. “Of course Ti-Rock has the right to make art about race.” 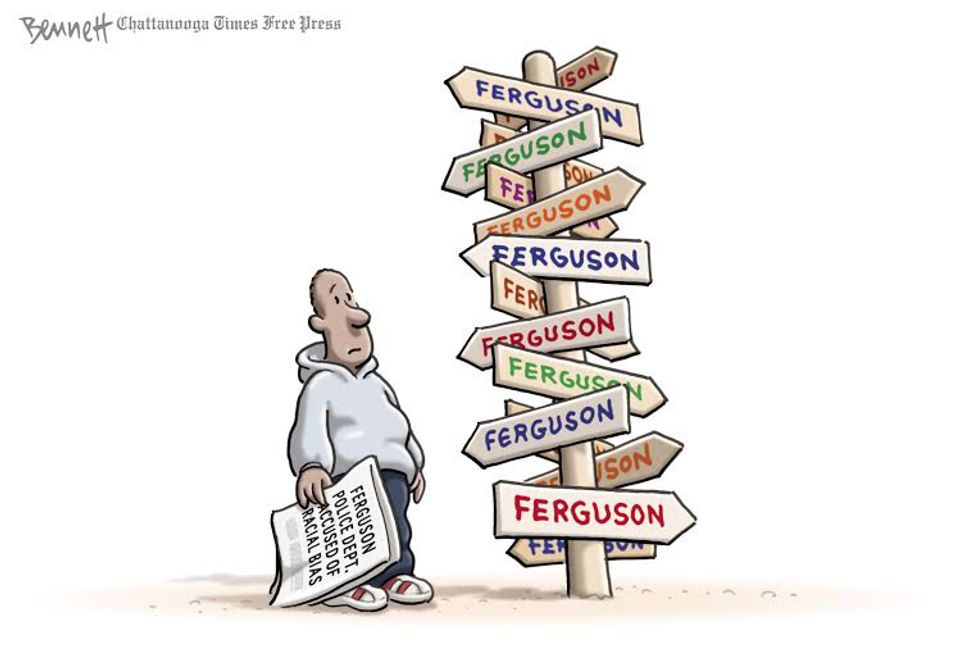 The exhibition will also include editorial cartoons by Clay Bennett, the Pulitzer Prize-winning cartoonist for the Chattanooga Times Free Press

In addition to more than 40 other works by Moore, the exhibition will also include editorial cartoons by Clay Bennett, the Pulitzer Prize-winning cartoonist for the Chattanooga Times Free Press, and a video of US Senator Elizabeth Warren speaking about race at the Edward M. Kennedy Institute in September. “Real racial progress in this country has always involved people of many races,” says Guess. “We just don’t seem to have many of those folks standing up today, and we need them. It takes courage, and somehow that doesn’t seem in abundance in white America when it comes to race.”

To head off any backlash, however, the museum is due to open another exhibition the following week that focuses on the African-American experience. As Small As a Giant: An Homage to the Black Lives Matter Movement includes work by artists such as Lovie Olivia, Ann Johnson, Anthony Suber and Phillip Pyle.

“It’s meant to ameliorate the shock from the first show, but perhaps their intentions would have been better served by dealing with actual grassroots leaders of African-American culture in Houston, and dealing with the misogyny within our communities, instead of pandering to a famous white artist who exploits black bodies,” says the artist Whitney Sparks, who had organised an earlier version of the Black Lives Matter show but says she was pushed out as curator this week. Guess says Sparks “was not the best team player for this project” and Dominic Clay, an assistant curator at the museum, would organise the exhibition instead.