The government lobbied the director of the World Heritage Centre, diplomats and national delegates

Unesco’s World Heritage Site Committee meeting in Istanbul this July voted not to put Venice on its list of World Heritage in Danger sites, but instead to postpone the decision until the 2017 meeting. This was despite the highly critical conclusions of Unesco’s own recent State of Conservation report on Venice, and appeals by the lobby group Europa Nostra and other civil society organisations.

Venice’s addition to this list (currently 55 sites, with only three in the West) would not only be embarrassing for the Italian government, which regularly uses its cultural assets and conservation know-how as an instrument of foreign policy, but would also lead to close and potentially unwelcome monitoring of Venice by Unesco officials.

Italy was put on warning at the 2014 Unesco meeting in Doha that it had until 2016 to act, or plan effective action on, a list of problems. These included: the vast cruise ships sailing through Venice; infrastructure, navigation and construction projects in the lagoon that would damage both lagoon and city; the impact on buildings and the lagoon ecology of waves caused by motorised vessels; the absence of a sustainable tourism strategy, of a buffer zone around the city and its lagoon; and of a co-ordinated approach to the protection of everything that makes Venice of “outstanding universal value”, the Unesco criterion for being called a World Heritage Site.

A damning report In October 2015, the International Council on Monuments and Sites (Icomos), sent a mission to Venice on behalf of Unesco to investigate the situation, and its report concluded that no significant progress had been made towards resolving any of the specified problems. The city council tried to prevent the mission from meeting representatives of civil society, who have been increasingly active in recent years drawing attention to the cruise ships, uncontrolled tourism and declining resident numbers, but the mission insisted on receiving them.

The Icomos report was sent on 9 June 2016 to the Italian government for any factual corrections to be made so that it could be included among the action papers supplied to members of the World Heritage Sites Committee before it convened on 10 July. The report was delayed, however, so it was not attached to the main papers, but buried among attached documents, making it less likely that its very critical comments would be read by members, who might then have objected to Unesco’s recommendation that Italy submit yet another report by 1 February 2017—in other words, be spared listing for another year.

Lebanon a lone voice Members had a further disincentive to read the report because Venice was not even included among the sites to be discussed. This ploy was, however, foiled by Jad Tabet, the member for Lebanon, despite pressure to withdraw his request from the Lebanese ambassador to Unesco, who had been lent on by the director of the World Heritage Centre, Mechtild Rössler, and from the Lebanese minister of foreign affairs, who had been contacted by the Italian ambassador.

In his speech, Tabet said that Venice and the Egyptian temples of Abu Simbel had been the foundation stones of Unesco’s first campaigns and had led to the World Heritage Convention of 1970. He continued, “The reaction of our committee comes very late. We should act at once and launch a new campaign for Venice, yet we are delaying again.”

Only a handful of the committee members chose to respond, all reassuring the Italian government of their faith in its capacity to protect Venice. Some seemed to confuse Italy’s visible support of world heritage (for example, the 60 carabinieri now in training to protect monuments in war zones) with the capacity of decentralised government to deal with the complex, long-term problems presented by Venice and its lagoon.

Unesco caved in before The member for Kuwait said: “We thank Italy for the aid it gives to countries present, therefore we trust the Italian authorities.” The member for Azerbaijan said that he believed Italy “has competence in conservation and that it will work closely with Icomos to implement all the recommendations”.

This is not the first time that Unesco has given in to pressure from the Italian government. In November 2011, an important international conference on all aspects of Venice, social and ecological, was cancelled at less than two weeks notice after pressure was applied on Unesco’s head office by Renato Brunetta, then a member of Silvio Berlusconi’s government. The reason: scientists were invited who were critical of aspects of the mobile barriers being built between the Adriatic and Venice lagoon by a consortium of businesses, the Consorzio Venezia Nuova. This was still at the height of its political influence, which was revealed in 2013 to be due to widespread corruption, both local and national. 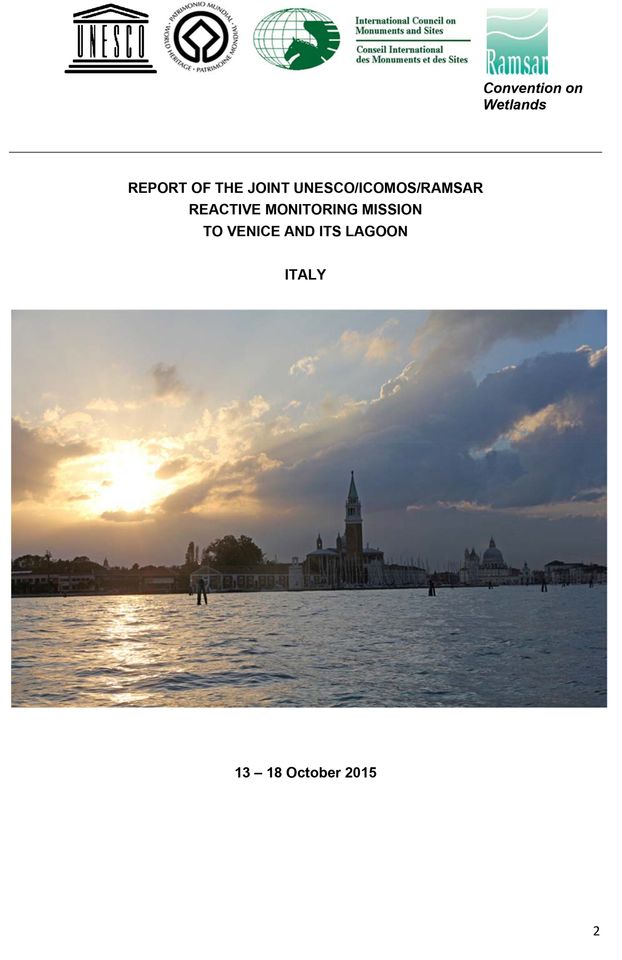 Report of the joint World Heritage Centre/ICOMOS/Ramsar Reactive Monitoring mission to the property of Venice and its Lagoon (Italy), 13-18 October 2015

1. THE 2014 WORLD HERITAGE COMMITTEE KEY RECOMMENDATIONS HAVE BEEN IGNORED

■ Still no heritage impact assessments of the effects of the proposed deep-dredging of the lagoon to allow the passage of cruise ships.

■ No enforcement of speed limits on motor boats to prevent wave erosion.

■ No prohibition on the largest ships and tankers entering the lagoon.

■ No buffer zone around the city and the lagoon.

2. HIGHLY DAMAGING PROJECTS ARE BEING PUSHED

If the proposed projects (excavation of a new shipping channel, extension of the existing channels, the extension of the airport), as outlined in governmental reports and during the mission, are implemented, in addition to the already constructed buildings, new port terminal and ongoing transformation of buildings for tourism purposes, Venice and its lagoon will be irreversibly damaged. This damage would include serious deterioration of the lagoon system and the architectural and urban coherence of the historic city, resulting in a serious loss of its authenticity.

3. THERE IS NO PLAN FOR VENICE AND ITS LAGOON

There is no shared vision for Venice among the many different stakeholders at national, regional and local levels, which prevents a coherent response to [the many] negative factors. The principal stakeholders, being the Ministry of the Environment, the Ministry of Culture, the Port Authority and the City of Venice, should reconvene and come up with a new scheme that includes the observations put forward in this report, as well as a strategy for all ongoing and planned developments within the boundaries of the World Heritage property, taking into account its outstanding universal value.

There are no established procedures for co-ordination and decision-making between the 21 official bodies involved in the management of Venice and its lagoon. The meetings of the Steering Committee (co-ordinated by the City of Venice), which has no real power and can only make recommendations, are limited to an exchange of information and points of view, without any mandatory results. The city council’s 2012 management plan for Venice is not a practical instrument for management and Icomos’s previous comments on it have been ignored.

Formal participation of non-governmental and civil society organisations in governance is lacking and they often feel excluded from official decisions. This is a serious management issue that needs to be addressed.

6. STATE FUNDING FLUCTUATES AND IS INADEQUATE

The city council must receive exceptional financial help [from the state] for restoration, including the acquisition and the conservative restoration of buildings, in particular if privately owned. The amounts awarded to the city council by the Special Law for Venice have varied from €268.9m in 1997 to zero in 2008. Between 1992 and 2004, the average amount was €143.2m; between 2005 and 2014, it was €19.9m. At least the average for the first period should be granted and paid regularly.

7. THE MOBILE BARRIERS (MOSE) ARE ONLY A TEMPORARY SOLUTION

These should be considered a large-scale experiment. It is likely that they will need to be adapted or changed after becoming operational. Continuous monitoring and action in light of environmental developments arising from changes in climate, sea level, water and sediment flows are necessary. With changes probably occurring as a consequence of sea level rise and intensified land-use (sediment reduction, bottom erosion, water quality deterioration), additional solutions to the mobile barriers will almost certainly be required to prevent further flood damage to the cultural heritage of Venice.

8. TOURIST CROWDING IS OUT OF CONTROL…

The relationship between the number of Venice’s inhabitants and the number of tourists is out of balance and is causing significant damage. The loss of population from Venice is alarming. It has several causes, the most important being the shortage of affordable apartments. A further grave problem is the changing use of buildings, converted from housing into accommodation for visitors. Urgent measures to manage tourism should be implemented, based on the consultative model of the Unesco World Heritage and Sustainable Tourism Programme.

9. …BUT THE CITY COUNCIL ISN’T EVEN COUNTING

The authorities admit they do not gather exact tourism figures. It is important that an efficient and precise management tool for collecting data on tourism be developed, including analysis of the transport of visitors to Venice.