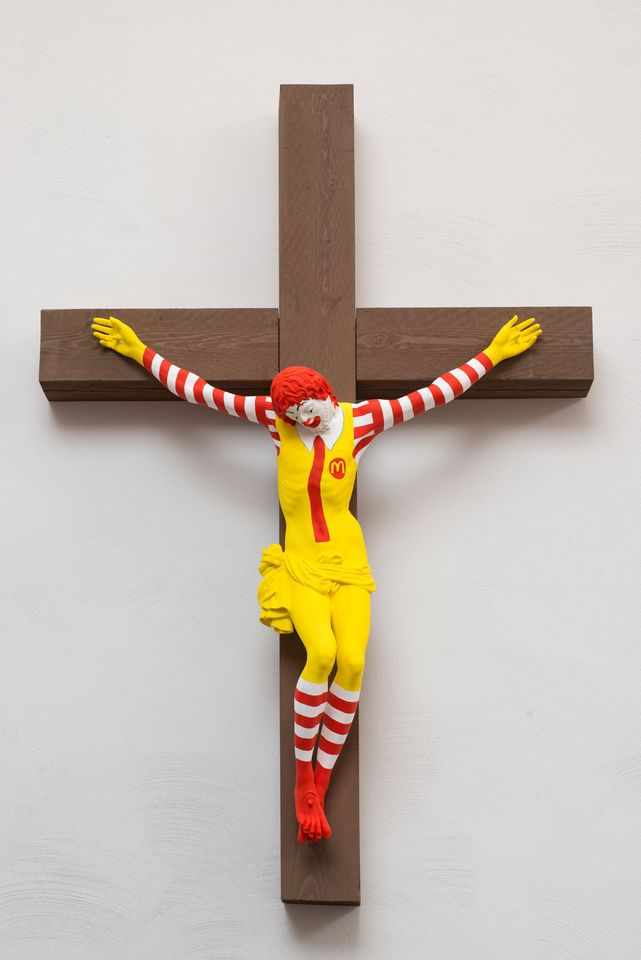 Hundreds of Christians protested outside the Haifa Museum of Art in Israel on Friday against Jani Leinonen's McJesus sculpture of a crucified Ronald McDonald, conflating the American fast-food chain with the crucifixion. Yet the Finnish artist insists that he requested the work be removed from the museum's Sacred Goods exhibition (until 17 February) last September and that it is on display against his wishes.

Violent clashes broke out between Christian protesters who tried to storm their way into the museum and the police, after a molotov cocktail was thrown at the museum the day before.

Christian leaders in Israel have condemned the work. “We denounce the exhibition and the injury to the holiest symbol of Christianity by an institution that is supposed to serve citizens of all religions,” Reverend Archimandrite Agapious Abu Sa'ada of the Greek Melkite Catholic Archeparchy of Akko told Haaretz newspaper. The reverend, who is the pastor of Saint Elijah Cathedral in Haifa, added that “what is suitable for Europe and the Christian population of Finland is not suitable for our community and cannot be met with understanding.”

One of the protesters complained that the government was slow to respond because the work—on display since August—mocked Christianity and not Judaism. “If they put up [a sculpture of] Hitler with a Torah scroll they would immediately respond,” he told the Walla news site, according to The Times of Israel.

Israel's culture minister Miri Regev sent Haifa Museum of Art's director, Nissim Tal, a letter last week demanding the sculpture’s removal, writing that: “Disrespect of religious symbols sacred to many worshippers in the world as an act of artistic protest is illegitimate and cannot serve as art at a cultural institution supported by state funds.”

The museum refused to remove the work but, following a meeting with church leaders and officials from the Haifa Municipality, agreed to erect a sign at the entrance to the exhibition explaining it contains potentially offensive content.

However, the artist Leinonen says that the work should not be on display. “The news about the demonstrations came to me as an upsetting surprise particularly because my work is in the exhibition against my wishes,” he tells The Art Newspaper. “In September 2018, I asked the curator Shaked Shamir to remove my work because I joined the Boycott, Divestment and Sanctions movement [against Israel]. The curator replied that she was sorry about my decision and that my message had been forwarded to the management and I assumed that the artwork had been taken out. When I heard that it is still in the exhibition, and that there have been violent demonstrations around it, I immediately sent the curator another request to remove it. I have not heard anything back from the museum. I insist my work be taken out of the exhibition instantly.”

The Sacred Goods exhibition, which focuses on contemporary artists' responses to issues of religion and faith in consumer society, also features “provocative” works by Magnus Gjoen and Nick Stern in which the crucifixion image “appears as a subversive element”.

The Haifa Museum of Art did not respond to requests for comment.

UPDATE: The mayor of Haifa said today (17 January) that the sculpture would be taken out of the exhibition. Einat Kalisch-Rotem tweeted: “The sculpture will be removed and returned as soon as possible. We regret the aggravation the Christian community experienced ... and the physical injury and violence that surrounded it.”