During an interrogation with Greek police, a construction worker explains what drove him to commit a brazen heist in 2012 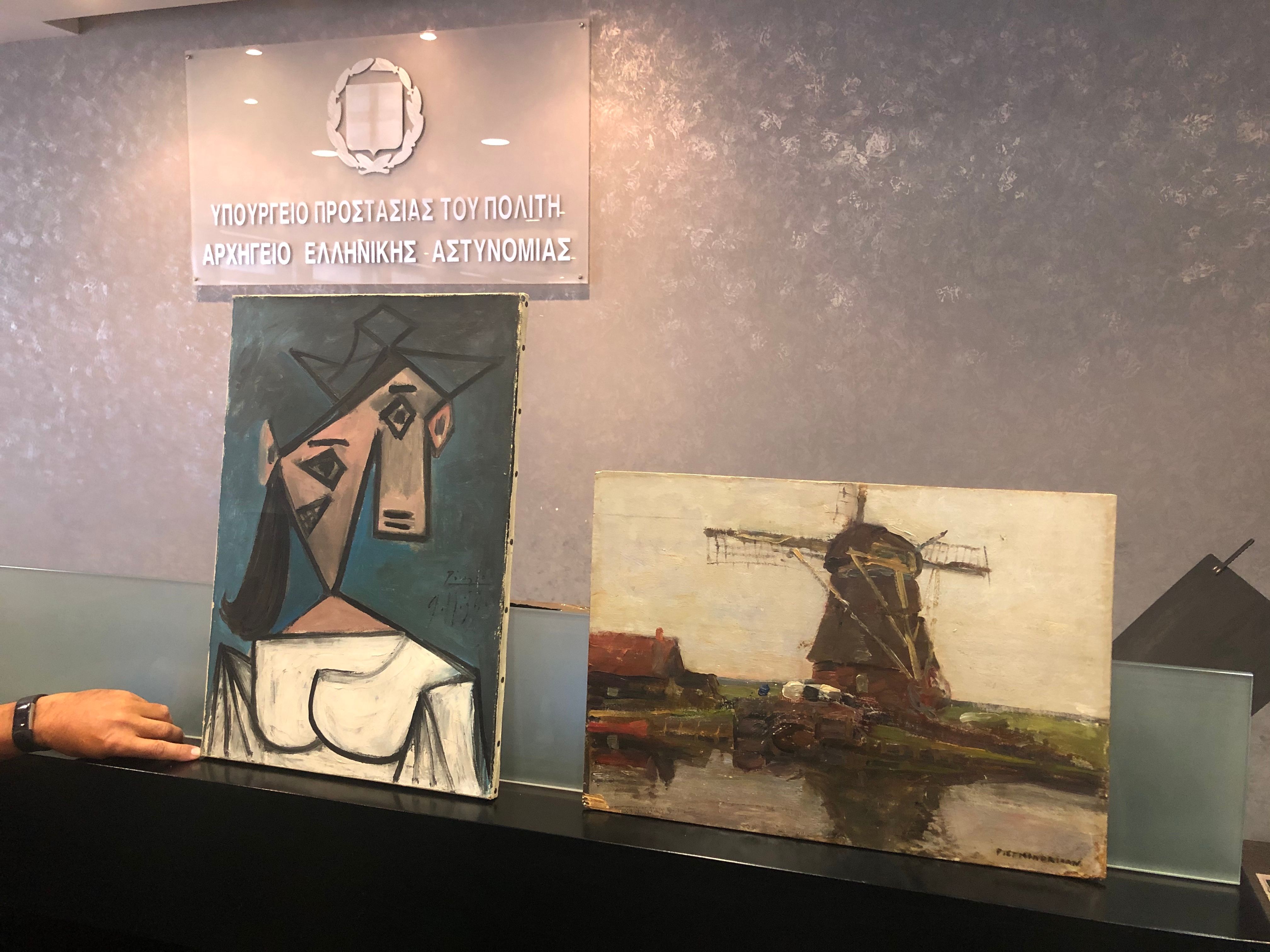 The 49-year-old construction worker who allegedly stole works by Pablo Picasso and Piet Mondrian from the National Gallery in Athens more than nine years ago has been identified by Greek media as a self-described “art freak” named George Sarmantzopoulos. And according to his confession to the Hellenic Police, he did it all because of his obsession with art.

“I want to tell you something else that I did many years ago, and it weighs on my conscience and I cannot sleep,” Sarmantzopoulos told police, according to the Greek newspaper Kathimerini. “In 2012, I went into the National Gallery and took three paintings. I will tell you everything in as much detail as I can remember.” In his confession, Sarmantzopoulos told police he was very sorry for his actions, and he aimed to fully cooperate with authorities to recover the paintings. Immediately after the interrogation, he led them to a wooded ravine in Porto Rafti, about 35km southeast of Athens.

Sarmantzopoulos, who has also been described as a painter and posted on Twitter under the nickname “ArtFreak”, said he was always interested in art. “I made constant visits to the National Gallery and became acquainted with the works and the space until I believed that one of them could become mine,” he told police. “These thoughts tormented me for about two years and led me to make the biggest mistake of my life.”

For about six months before the theft, Sarmantzopoulos said he would sit in the galleries for hours, “observing not only the works of art but also the configuration of the space, the behaviour of the guards, where there were windows, cameras… I don’t remember how many nights I sat hidden in the plants, watching the guards.” He learned the security systems, and “all the guards’ habits, when they changed shifts, who smoked, who went out into the garden,” he said. “I knew that [the number of guards] had been reduced recently due to the financial crisis, I knew that there was also an alarm.” And that is when he decided to steal the art, he said. “I hadn’t decided which work I would take, but only that I wanted to take one.”

To prepare for the heist, Sarmantzopoulos told police, he bought all-black clothing and a bag, and grabbed a few of his construction tools—a hammer, an iron chisel and a knife. “The choice of the day of the theft was random,” he said, but on a Sunday, 8 January 2012, he took the Metro to the museum, and went to a wooden warehouse on the property, where he changed clothes and waited until 9pm, when the museum was closed. Sneaking up to the museum building, Sarmantzopoulos said he found a balcony with unsecured doors. “As soon as the balcony door moved a little, a beep sounded, which I realised would alert the security guard,” he said, adding that he knew at that time of night there would only be one guard on duty.

“At first I thought that I would not be able to get into the space with the exhibits,” Sarmantzopoulos said, and he left the museum for a quick walk, sitting at a table outside where he smoked some cigarettes, collecting the butts in a bag. “Twenty minutes later I returned to the same place,” he said, “I opened the balcony door, which was indeed unlocked, heard the beep, went inside and closed it again.” Sarmantzopoulos, hidden in a nearby corridor, said that after a while he heard the guard come by and “mutter something”, theorising that he was “cursing to himself because he couldn’t figure out what was going on”.

“That's when I decided that annoying the security guard was the best way to carry out the theft, by making him believe that there was a technical problem in the alarm zones,” Sarmantzopoulos told police. “So I repeated the same process several times. I opened and closed the balcony door without going inside.” According to an AP report at the time of the theft, this prompted security to disable at least one alarm.

Sarmantzopoulos told police he stayed in that spot until 4am the next morning, at which point he opened the balcony doors and entered the museum. “The place was a bit dark but there was enough light to see what I was doing,” he said. “I crawled into the main space and pulled out the bag.” Sneaking up the gallery stairs, Sarmantzopoulos crawled into another gallery and “started waving my arms to see if the alarm sensors were working”, he said. Since he did not hear any klaxons, he figured they had been turned off—although it turned out he did trip some motion sensors. “I got up and found myself in front of the painting by Picasso. I removed it from the wall with the frame, which was heavy, and left it on the edge of the stairs and I took another painting by Mondrian while I removed one more,” Sarmantzopoulos said. “It took five to seven minutes to remove the frames because they did not fit in the bag.”

At that moment, the guard started coming into the gallery, shouting: “Thief, thief, stop!” But Sarmantzopoulos escaped from the museum, without looking back. While he was on the sidewalk outside, he realised he had cut his hand, so he took a drawing he had stolen from the gallery—believed to be a study of a religious scene by the Old Master Guglielmo Caccia, known as Moncalvo—and wiped the blood away, shoving the paper into his pocket. (Police said he told them he later flushed the work down a toilet.) Then, hearing the alarms from the museum and the sirens of patrol cars, he ran across the park and back into the warehouse, where he stayed hidden. After a while, when there were fewer police, he went to a nearby bus stop. “I asked two girls what was going on and finally returned home by taxi,” Sarmantzopoulos said.

Hiding the paintings in some furniture in the “largest bathroom in the house”, Sarmantzopoulos says he threw away the clothes and tools he used during the heist over the next few days. “The theft was planned and carried out exclusively by me. There was no accomplice,” he told police. “I did not intend to sell the paintings nor did I ever make any such effort.”

“At one point I confessed to a girl I had a relationship with in England that I had the paintings," Sarmantzopoulos added, "but she didn't believe what I said.”

In May this year, panicked by press reports that authorities were close to identifying the culprit behind the heist, Sarmantzopoulos moved the paintings from a warehouse where he was keeping them, to the ravine, where he hid them behind “a large and very dense bush”, he said. When he was questioned by police this week, he took them to the spot, and they were eventually found, wrapped in plastic, 10m further down the ravine. “When I heard the policeman say that they found the package [holding the paintings]… I burst into tears and fell to the ground in thanks,” Sarmantzopoulos said. “That's how much I longed to return them.”

“I am deeply regretful. I declare my complete remorse,” he added. “I know I will be punished but I ask for leniency.”

Sarmantzopoulos's lawyer, Sakis Kechagioglou, told Greek news channel MEGA that his client was merely “an art lover” and that while such a “passion for art” might make some “turn into criminals and commit criminal offences”, the high-profile defense attorney was convinced that Sarmantzopoulos had no intention of hawking the stolen paintings. “If he really wanted to sell them, he could have done it,” Kechagioglou said. “The information I have is that there is no evidence that he sought to sell them.”

“Without his help and cooperation with the police, the works would never have been found,” the lawyer added. “If he had kept his mouth shut and did not cooperate—proving in practice his remorse—then these works would not be returning to the National Gallery.”