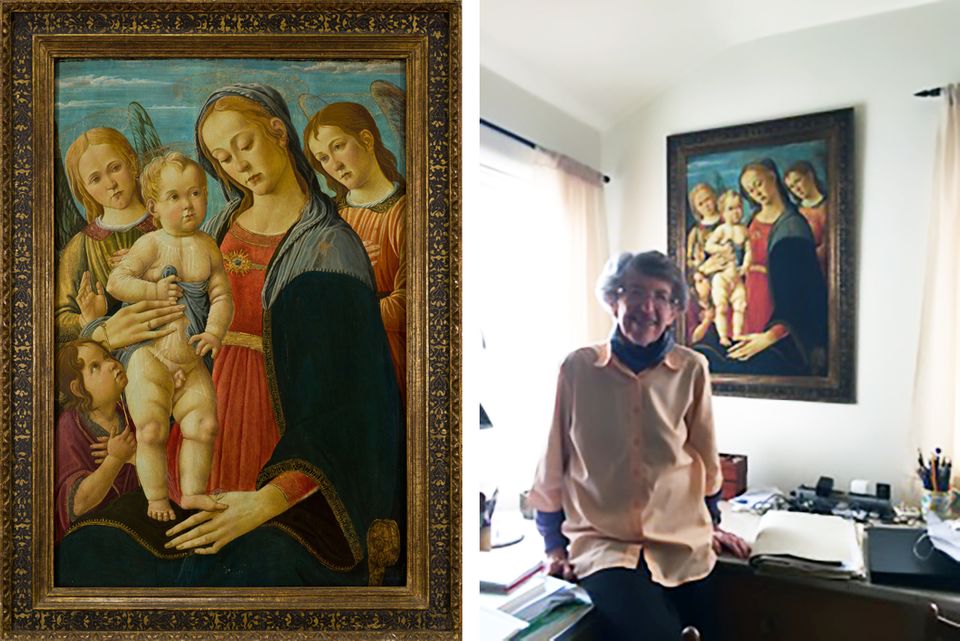 She had loved the painting since childhood: a vibrant 15th-century Madonna and Child by the Florentine painter Jacopo del Sellaio, inherited by her mother before it was looted from her Jewish family by the German authorities in France in 1942.

Now Grete Unger Heinz is relieved to have seen it reappear in the collection of the Cerruti Foundation, a house museum managed by the Castello di Rivoli Museum of Contemporary Art in Turin that is compensating her and her fellow heirs for the painting. The arrangement was brokered in a restitution agreement announced today by the Holocaust Claims Processing Office (HCPO) in New York.

“At almost 93, I had lost hope that this beloved Italian Renaissance painting belonging to my parents would ever resurface,” says Heinz, who lives in Carmel, California. She says she is gratified not only that the foundation reached an “equitable” arrangement with the heirs of her parents, Anna Arens Unger and Friedrich Unger, including a full accounting of the painting’s past, “but also that I might yet see the work itself in the Castello di Rivoli Museum in my lifetime”.

“My first memory of the painting was in the dining room of my parents’ [Vienna] apartment,” she says of the painting, fully titled Madonna and Child With the Young St. John and Two Angels. “As I ate lunch in this dining room most days and was seated diagonally across from this large painting, I was exposed to it every day and could contemplate it during this daily meal. What most struck me were the exquisite colours of the Madonna’s cloak and dress.”

“I had never seen such colours in any of the paintings I had been shown at the Kunsthistorische Museum in Vienna, to which I had been taken occasionally,” she says. “The loveliness of the face of the Madonna and of St. John also stayed in my memory.” The work is roughly dated from 1480 to 1485. 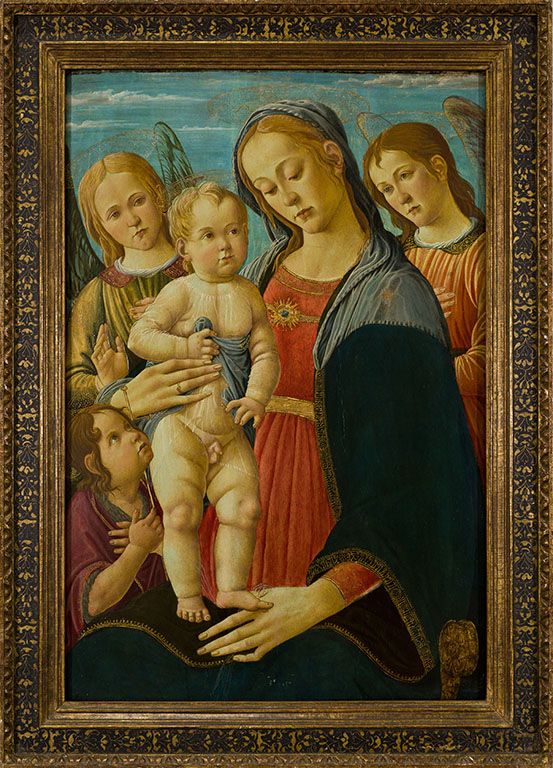 The HCPO, part of the New York State Department of Financial Services, says it has also brokered compensation for the Unger heirs for two other Old Master paintings that were looted from the family’s collection and never resurfaced: Jacopo Tintoretto’s Holy Family and Pieter de Bloot’s Scene in a Dutch Farmhouse, which like the Madonna and Child were also originally owned by Anna Arens Unger’s father, Gustav Arens, a Viennese Jewish businessman and collector.

The HCPO says it filed successful claims for the two works with the Commission for the Compensation of Victims of Spoliation Resulting from the Anti-Semitic Legislation in Force During the Occupation, a French government body that settles claims presented by victims or their heirs.

The amount of compensation for the three paintings was not disclosed. Carolyn Christov-Bakargiev, the director of the Castello di Rivoli and the Cerruti Foundation, says that based on a valuation by Christie’s, the compensation for the Madonna and Child is being paid in three installments with funds left to the foundation by the industrialist and collector Francesco Federico Cerruti, who died in 2015.

Arens originally purchased the Jacopo del Sellaio at a Vienna gallery in 1936. He died the same year and it was inherited by Anna Arens Unger, his eldest daughter. After the annexation of Austria by Germany, she and her husband suffered persecution, and the Nazis seized their entire collection of paintings.

The family recouped the art after paying a ransom and fled in 1938 for France, where they stored the works in a customs warehouse in Paris before emigrating to the US in 1939. They tried unsuccessfully to have the art exported before it was plundered in 1942 by the Germans.

The Ungers recovered many of their paintings after the Second World War with the help of US military forces but the Jacopo del Sellaio remained elusive, saddening their youngest daughter Grete. Heinz says her father spent the last nine years of his life between the end of the Second World War and his death in 1954 trying to trace what had happened to the Florentine painting, which was advertised by an international art police agency and was included in an official French listing of works stolen by the Nazis. After her father’s death, her mother continued to search for it another decade and finally gave up around the mid-1960s, she adds.

Research by the Castello di Rivoli Museum shows that it reappeared on the market at a Lucerne gallery in 1974 before being sold at auction in Christie’s in London in 1985. In 1987, the Castello di Rivoli relates, Cerruti bought it from an Italian art dealer. After Cerruti’s death, his collection was entrusted in 2017 to the Castello di Rivoli, which commenced research on all of the works in preparation for a scholarly catalogue. Christov-Bakargiev says that its provenance research eventually led it to the National Archives and Records Administration in Washington, which had records of claims filed in 1945-46. A colleague specialising in provenance research also tracked it to an image of the Jacopo del Sellaio on the HCPO database.

In 2018, she says, the Cerruti Foundation made contact with the HCPO in New York and thereby with the heirs, who were identified as Heinz and the three children of Heinz’s sister. Negotiations began, and an “amicable” agreement was reached early this year to compensate them but keep the painting in the Cerruti Collection, displayed in a villa a short walk from the Castello di Rivoli, Christov-Bakargiev adds.

Heinz says that after her mother’s death in 1994, she had actually been notified by the Lost Art Register in 1999 that the painting had been sold at Christie’s to an Italian art dealer.

“When I was in London that year, I was totally rebuffed by Christie's in making inquiries about the painting,” she adds. “According to American legal experts, there was no way to do anything about stolen paintings that were held in Italy. So I gave up on any further efforts to recover this painting, which had been the one dearest to me from my parents’ collection.”

In a statement, Christie’s replies: “Christie’s is committed to promoting clear and transparent procedures for dealing with provenance issues and ownership claims from the Nazi era (1933-45), including taking reasonable and appropriate steps to prevent stolen objects from circulating in the art market. We have also been at the forefront of developing best practice for the art market and have been active and successful in spotting many hundreds of problematic artworks over the years. We have been proactive and indeed successful in helping collectors and claimants reach fair and amicable claims resolutions.”

At the time of the sale in 1985, however, it adds, “the vital databases, registries, and digitised records necessary for thorough restitution research did not yet exist.”

Christov-Bakargiev says that the museum has shipped a one-to-one-scale photographic copy of the Madonna and Child to Heinz and half-size copies to the other three heirs. She adds that she is “extremely pleased” that the provenance research and the help from HPCO helped to resolve a decades-long Holocaust claim.

“This artwork by Jacopo del Sellaio, so loved by its original owners, and also by Mr. Francesco Federico Cerruti, who acquired it in 1987 with no knowledge of its troubled past, has finally found peace,” she says of the painting, which hangs in the villa’s tower bedroom.

“No amount of money can make up for the persecution of the past, but we hope these agreements represent a small measure of justice and closure,” says Linda A. Lacewell, the superintendent of the New York State Department of Financial Services.