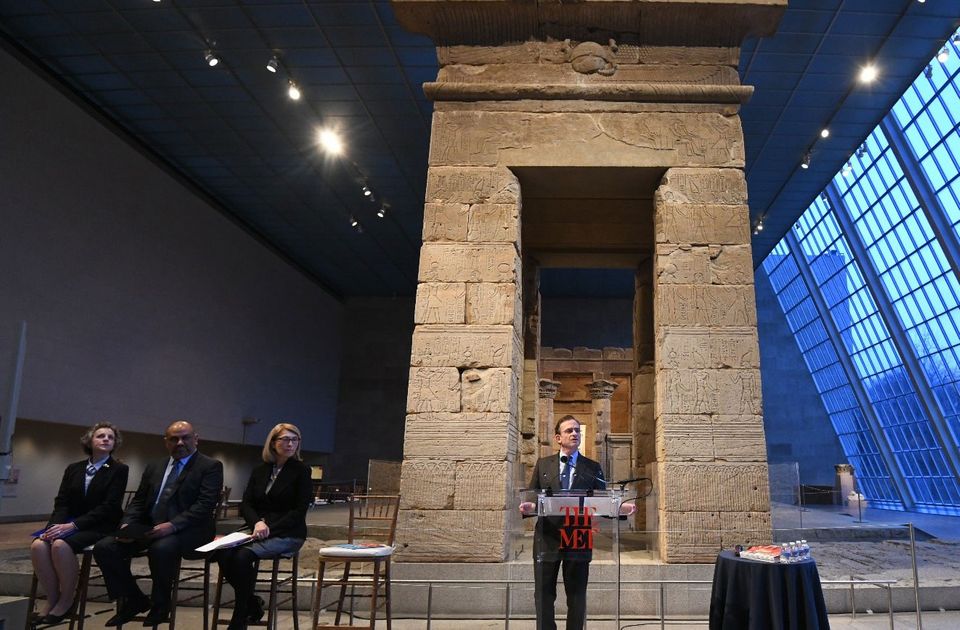 Daniel Weiss, the current president and chief executive officer of the Metropolitan Museum of Art, speaking at the launch of an emergency red list of cultural objects from Yemen Don Pollard

As conflict rages in Yemen, resulting in one of the world’s worst humanitarian crises, leading cultural and political figures gathered at the Metropolitan Museum of Art in New York last night to launch an emergency red list of cultural objects being looted and possibly sold internationally.

Standing at the Met’s Temple of Dendur in its Egyptian galleries on 31 January, the ambassador for Yemen Khaled Hussein Alyemany said publishing the list “could not have come at a more crucial time”. He added: “I come from a country deeply rooted in history that has been able to connect with many ancient civilisations. Saving Yemen’s heritage is saving the world’s heritage.”

The red list, which is compiled and published by the International Council of Museums (Icom), includes detailed descriptions of bronze daggers, figurines, gold and silver coins, astrolabes, illuminated Arabic manuscripts and other objects at risk of trafficking.

Since the war started in 2015, numerous archaeological sites and museums have been affected. They include Baraqish, the fourth century BC capital of the Minaeans, which was extensively damaged in September 2015, reportedly by Saudi-led airstrikes, and the National Museum in Taiz, which was engulfed by a fire sparked by heavy shelling by Houthi rebels in February 2016. In the Old City of Sana’a, a Unesco world heritage site, 103 mosques are currently under threat.

“We are now strongly advising collectors to avoid the objects on the list altogether, or at least to be extra cautious and thoroughly check the legality of provenance,” says France Desmarais, the director of programmes and partnerships at Icom.

Only the Yemeni government is authorised to issue documents for the export and import of cultural goods, so how likely is it that collectors will be able to obtain such licences? “It’s difficult, but not impossible,” Desmarais says. “It is important to respect the sovereignty of nations, so if it is required by law, we must abide.”

The publication of the red list is more of a pre-emptive move, says Sheila Canby, the curator in charge of the Met’s department of Islamic art, which owns 37 pieces from Yemen. She notes that very few objects of Yemeni origin have surfaced on the market since the war broke out.

“The impact of red lists in general has been that the open markets for such artefacts has dried up,” she says. “I haven’t really seen anything from Yemen in any of the big auctions since the most recent war began. Nor has any art dealer come to us with anything from Yemen.”

But many looted artefacts end up on the black market. “As we know, the lack of objects on the open market doesn’t meant that there isn’t an underground market in antiquities,” Canby says. “The aim is to warn collectors to be vigilant.”

Concluding the evening–a more muted affair than the one in 2016 which saw the former French president François Hollande announce a $100m fund to protect cultural heritage in the Middle East–Suay Aksoy, the president of Icom remained hopeful. “What has long felt like a battle in which we had too few allies, has transformed into an international response where we can count with powerful players by our side,” she said. “By working closely together, we believe we will change the world.”