Images of Gauguin in Tahiti discovered in photo album

Experts believe that prints in the album show the artist, his mistress and a ship’s doctor

The only known photographs of Gauguin in Polynesia have been discovered in an album recently acquired by a Munich-based dealer. The album includes an image of a young Tahitian woman being kissed by the middle-aged artist, whose friend Dr Gouzer, a French ship’s doctor, is also shown with a local woman. The images provide a fresh insight into Gauguin’s life in Tahiti in 1896.

Two albums of Tahitian photographs taken by Jules Agostini came up for sale in a French provincial auction in July 2015. One was acquired by the dealer Daniel Blau and the other by the Musée du Quai Branly in Paris. There were no references in the auction catalogue to photographs of Gauguin, and the one acquired by Blau sold for €5,875.

A decade ago Blau’s wife Maria first identified Gauguin in a Tahitian group photograph they had acquired earlier (based on comparisons with his self-portraits and earlier photographs taken in France). The photographer and the date of the image were then unknown, and the identification was not taken up by other Gauguin specialists. The album recently acquired by the Blau couple contains another print of the same image, identifies the photographer as Agostini and dates the print to 19 July 1896. Agostini was a friend of Gauguin’s. The album also includes an already known image of the artist’s house in Tahiti, inscribed “Habitation du peintre Gauguin”.

The album has two group photographs of what is captioned a “pique-nique”, although it appears to be little short of a banquet, held at Pointe Venus, ten kilometres from the capital, Papeete, on 19 July. Many of the European male guests, who are dressed very formally (along with floral crowns), seem to be French naval officers, while the females are all young Tahitian women wearing the long dresses introduced by Christian missionaries.

His mistress? Gauguin, a notorious womaniser, seems to appear in two group photographs in the Blau album. In the first he is shown with two Tahitian women; kissing one and draping his hand on the breast of the other. In the second photograph he grins mischievously and reclines on the woman he had been kissing, with his hand on her breast. Blau speculates that she could well be Pahura, his very young mistress. 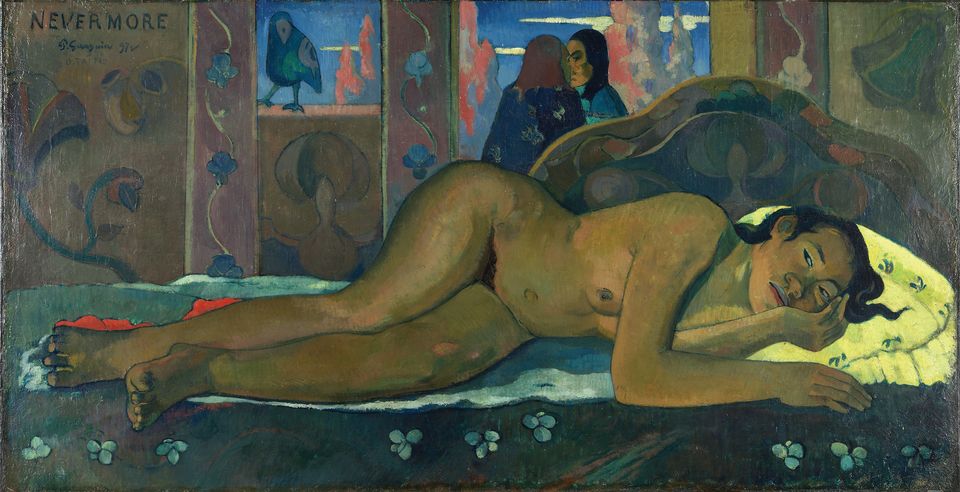 Pahura was the model or inspiration for many of Gauguin’s finest paintings, probably including Nevermore (1897), now at the Courtauld Gallery, London. In January 1897 Gauguin, then 48, wrote to his friend Armand Séguin: “I have a 15-year-old wife who cooks my simple everyday fare and gets down on her back for me whenever I want, all for the modest reward of a frock, worth ten francs, a month.”

Daniel Blau says he is “convinced” that the man depicted in the two group photographs is Gauguin. “Until recently I thought of Gauguin as a sick and aging man, but I now see him as a forceful artist, enjoying life and with a glint in his eyes,” he says.

Caroline Boyle-Turner, author of Paul Gauguin & the Marquesas (published by Vagamundo), is also convinced that it is the artist in the group photographs. She, too, suggests that his companion could well be his mistress. “Pahura was three months pregnant and her condition might well have been a source of joy for the artist, helping his ebullient mood,” she says.

The two group photographs are also included in the second Agostini album sold at a Bayeux Enchères auction on 13 July 2015, and which was acquired for €22,325 by the Musée du Quai Branly. The photographs in this album lack the detailed captions and dates of the Blau album. Christine Barthe, the museum’s head of photographic collections, says: “Some people see Gauguin in the album, but we need more than wishes.”

The morphine specialist who was Gauguin’s friend 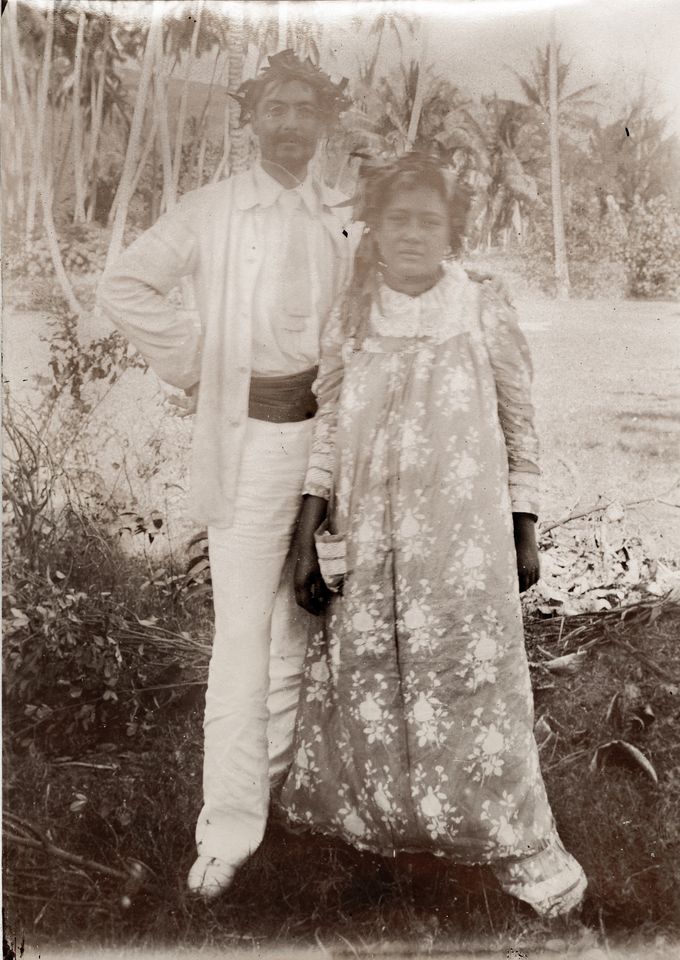 Dr Gouzer, a ship’s doctor, is a crucial link helping to confirm the identification of Gauguin in two group photographs, since he and his ship, the Duguay-Trouin, appear in the Agostini album.

Identified by The Art Newspaper as Joseph Gouzer (born 1854, died 1901), he appears in the Blau album as “Docteur G”, standing intimately close to a Tahitian woman, Faona. His descendants have confirmed he is the man in the photo.

The friendship between Dr Gouzer and Gauguin has been largely overlooked (his first name is not cited in the Gauguin literature). Intriguingly, he was a specialist on morphine and in 1896, the year of his Tahitian visit, he published a book entitled Journal d’un Morphinomane, based on a diary by a medical colleague who had died of morphine addiction in what is now Vietnam. At that time Gauguin was regularly taking morphine to dull the pain of ulcers on his legs.

Gouzer was one of the very few buyers of Gauguin’s work in Tahiti—he bought Three Tahitian Women (for 100 francs). It was subsequently acquired by Walter Annenberg, who bequeathed it to New York’s Metropolitan Museum of Art in 2002. Gauguin also gave Gouzer two drawings, including Study of Two Tahitian Heads (1896-97), which is now at the Art Institute of Chicago.

It is possible that Gouzer and Gauguin first met at the hospital in Papeete. Gauguin was there for treatment on his leg, from 6 to 14 July 1896. On 13 July he wrote to his friend Daniel de Monfreid to say that an officer would be taking “several clumsy canvases” to France.

Gouzer’s ship, the Duguay-Trouin, stopped at Tahiti several times, and in March 1897 Gouzer carried some of Gauguin’s paintings back to Paris.

Only one letter from Gauguin to Gouzer survives, from 1898, when the artist wrote: “I cannot contemplate returning to France, as you advise me... I have not said everything about Tahiti [in paint].”