Organisers of the second edition of Pacific Standard Time (PST) announced the event’s theme, LA/LA, which looks at the culture of Los Angeles and Latin America, in February 2013. At the time, the economy was stabilising, President Barack Obama was cementing his legacy in his second term and Donald Trump had yet to announce plans for his “big, beautiful wall” on the border of Mexico.

The world is a different place today. Although President Trump has since softened some of his rhetoric (in June, he announced a temporary halt to his earlier intention to immediately deport undocumented immigrants who came to the US as small children), PST’s programme still seems suddenly subversive. The event’s goal—to take a “fresh look at vital and vibrant traditions in Latino and Latin American art”—is now an exercise in relational political aesthetics.

“The whole idea of transcending the border and going past the border were themes we were exploring,” says Lowery Sims, the curator of an exhibition titled The US-Mexico Border: Place, Imagination and Possibility at the Craft and Folk Art Museum (10 September-7 January 2018). “And they’ve taken on a new urgency.”

The exhibition was always conceived to focus on works that draw attention to the border, like the two-headed Trojan Horse that Marcos Ramirez (who is also known as ERRE) installed at the Tijuana-San Diego border during the inSite biennial in 1997—a work that symbolises interdependence and symbiotic invasion.

In many ways, under President Trump, Sims says, the show will allow visitors to acknowledge a border reality that has heretofore been rarely discussed. “I was in Tijuana and even though the [existing] wall is a persistent and ominous presence, when you go down to the beach on the Pacific, people were painting on it,” Sims says. “It was totally integrated into the neighbourhood. On the United States side, there’s total barrenness, until you get to Imperial,” a city in California. 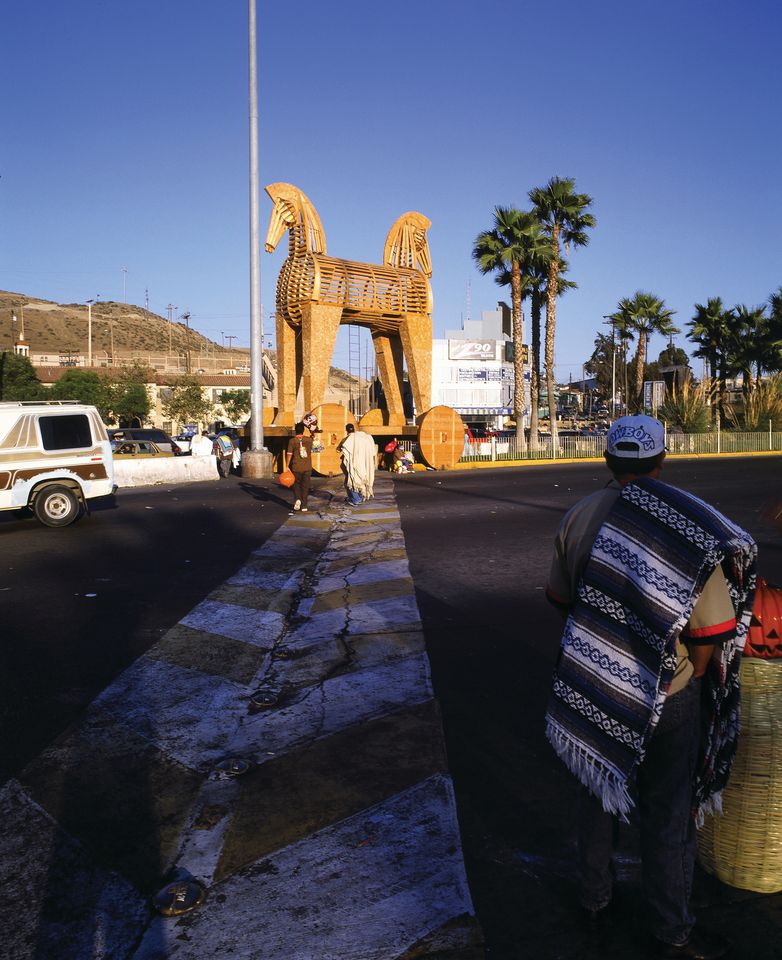 Although immigration has always been a lightning rod, the Trump presidency has changed the mood, says Clement Hanami, the lead curator of the Japanese American National Museum’s PST show, Transpacific Borderlands: the Art of Japanese Diaspora in Lima, Los Angeles, Mexico City and Sao Paulo (17 September-25 February 2018). Since the election, Hanami has seen a revival of the spurious belief that Japanese internment during the Second World War, in which more than 110,000 Japanese-Americans were kept in US camps, was beneficial for those who experienced it.

His attitude in general has been to engage with all narratives of American history. “I do believe that the museum, in and of itself, has been about creating a more complete truth about all American experiences,” he says. “Without looking at the Latino experience or the Japanese experience—or any group’s experience—that truth is more fragile.”

Although LA/LA is meant to celebrate Southern California’s connections to South and Central America, some shows touch on the more unseemly elements of that relationship. One example is the Oceanside Museum of Art’s exhibition unDocumenta (23 September-28 January 2018), the title of which refers to the German exhibition, where current immigrant issues are also being explored. UnDocumenta includes a work by Omar Pimienta in which the artist will host a “mobile consulate” to offer new passports in exchange for old, ideally expired, ones.

The show’s curator, Alessandra Moctezuma, says she was inspired by works like Ana Teresa Fernández’s Erasing the Border, in which the artist painted the border wall the colour of the sky. “It seemed very utopian, but when I was planning the show it seemed almost like a possibility,” Moctezuma says. “Now, with Trump getting elected, it’s ironic. He’s talking about building a barrier. People don’t know there’s already a fence,” she says, adding: “That’s definitely going to bring tension to what we’re doing.”

Other works in other exhibitions are similarly politically blunt. The Torrance Art Museum, for example, will stage Yoshua Okón: Oracle (9 August-4 November), a 2015 installation by the artist that includes video of a protest by a right-wing militia against undocumented immigration in the town of Oracle, Arizona. It also touches on the CIA’s entanglements with the computer technology corporation Oracle.

But the immigration theme and the tenor of the times can be a boon: they give smaller museums a platform they might not otherwise have. “I think we’re lucky,” says Benjamin Tippin, a curator at Torrance. “We’re a small municipal institution. We have staged shows that have got attention before, but I don’t think we’re necessarily large enough that we’re the first place that people are going to be resting their eyes on.”