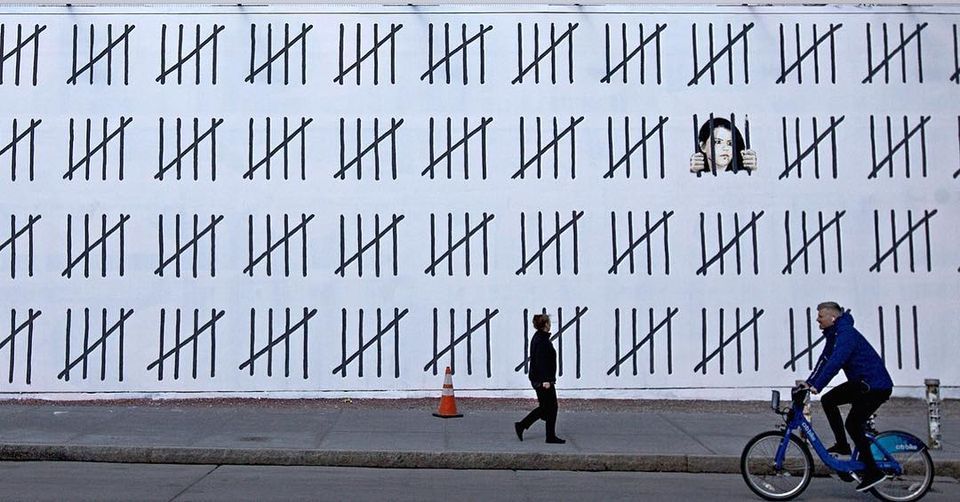 In March, Banksy and the graffiti artist Borf unveiled a 70ft mural in New York protesting against Dogan's arrest varius

The Turkish-Kurdish artist and journalist Zehra Dogan has illegally written and sent a deeply heartfelt letter to Banksy, thanking him for the mural he unveiled in New York in March protesting against her arrest.

The Bristolian street artist posted the two-page handwritten letter together with an English translation on his Instagram account yesterday (17 July) with the caption: “I got a letter from Zehra Dogan in Diyarbakir Prison, Turkey.”

Dogan begins by describing the conditions in which she writes, “from a dungeon which has history of bloody tortures, in a town with a lot of bans, in a denied country”.

The letter is illegal, Dogan explains, because a “communications ban” has been imposed on her that forbids her from making telephone calls or sending letters. “I’m writing and delivering this letter in clandestine ways,” she says.

. I got a letter from Zehra Doğan in Diyarbakır Prison, Turkey

In March 2017, Dogan was sentenced to two years and ten months in prison for posting on social media a painting of the smouldering ruins of the Kurdish town of Nusaybin following its destruction by Turkish security forces.

A year later, Banksy, in collaboration with the graffiti artist Borf, unveiled a 70ft mural on the Houston Bowery wall depicting a tally of the days Dogan has spent in prison. The piece includes a portrait of Dogan, shown trapped behind bars, one of which is a pencil. For several nights, Banksy projected an image of Dogan’s original painting above his mural.

In her letter, Dogan recounts how inmates can hear the “horrible sounds of dozens of fighter jets that depart for bombing our beautiful lands, mountains and cities”. She continues: “It’s very hard to describe the feeling of reading that someone you know is killed from the newspapers nearly every day.” Suicide is not uncommon in the prison, Dogan says. “In days like these, one can’t endure living.”

Dogan’s letter concludes by expressing the happiness that she and her fellow inmates felt when they read about Banksy’s protest in the newspapers. “Far away from me and our people, it was the best reply to the crooked regime that can’t even tolerate a painting,” she says.

“With your support, my painting has now accomplished its mission of showing the atrocities… I can’t thank you and Borf enough. I couldn’t imagine that my painting would be projected in a city like New York. I spend 12 hours a day imagining and this is even beyond my imagination. I feel stronger and now I’m painting [the Syrian-Kurdish city of] Afrin.”

Dogan has no access to canvas and paint in prison, so she creates works on leftover paper with “paint” she produces from food, drinks and her own blood, according to a spokesman for Free Zehra Dogan, a campaign group lobbying for her release.