In highly personal portraits, an artist speaks up for his native Baltimore 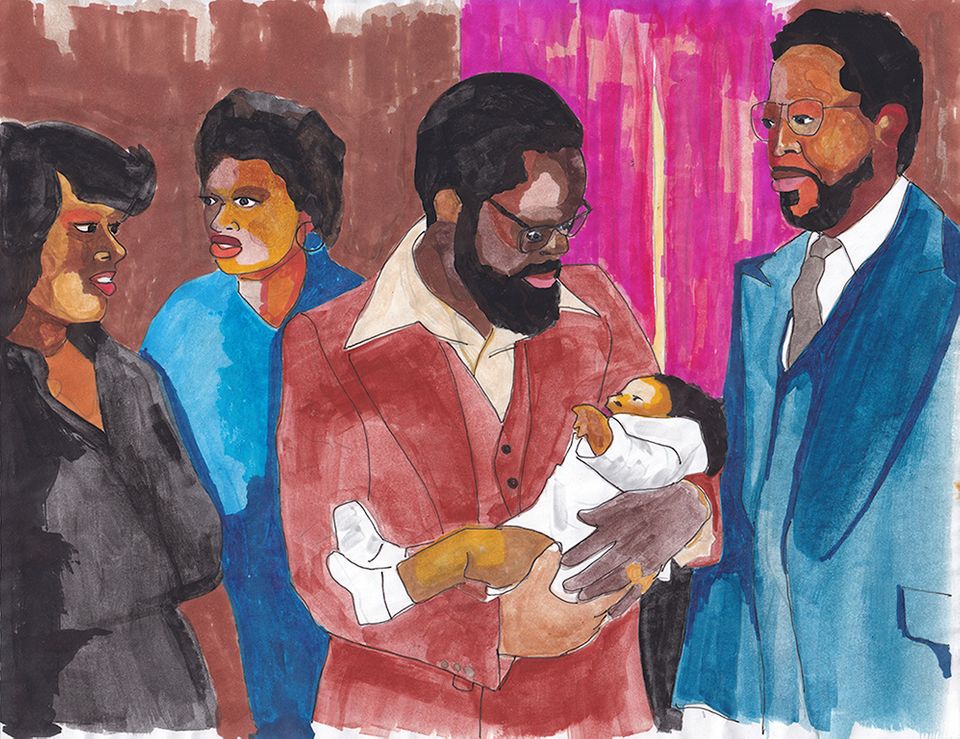 Derrick Adams, Family Portrait No. 6 Courtesy of the artist

Painting, collage, prints, sculpture, drawing, performance, video, sound: the artist Derrick Adams is known for embracing multiple mediums in a dogged exploration of self-image, popular culture and contemporary African American culture and history. In so doing he has drawn a wide and devoted following, with his work exhibited globally and entering the collections of institutions including the Metropolitan Museum of Art and Studio Museum in Harlem.

Now the Brooklyn-based artist is turning to his roots. For his first exhibition in his native Baltimore, he has painted 10 portraits inspired by images from a family photo album that his sister had scanned and sent to him in digital form. Executed in oil on burlap canvas, they will be presented at the Gallery in Baltimore City Hall, and Adams expects dozens of members of his extended family to attend the opening.

“I selected images that I thought conveyed a sense of kinship and family and love and ceremony and ritual,” he said in an interview. He describes the portraits as “looser and more expressive” than some of his past work.

Titled Where I’m From­—Derrick Adams, the show is a homecoming on more than one level. As a 10-year-old at a Baltimore elementary school, Adams was encouraged to enter a citywide art competition titled “My Heritage Myself”; as one of the winners, he was invited to lunch with the city’s mayor and saw his work displayed at City Hall. “I’m just really happy, mainly because it’s like having this experience that I remembered as a child, but now having it as an adult,” he says. 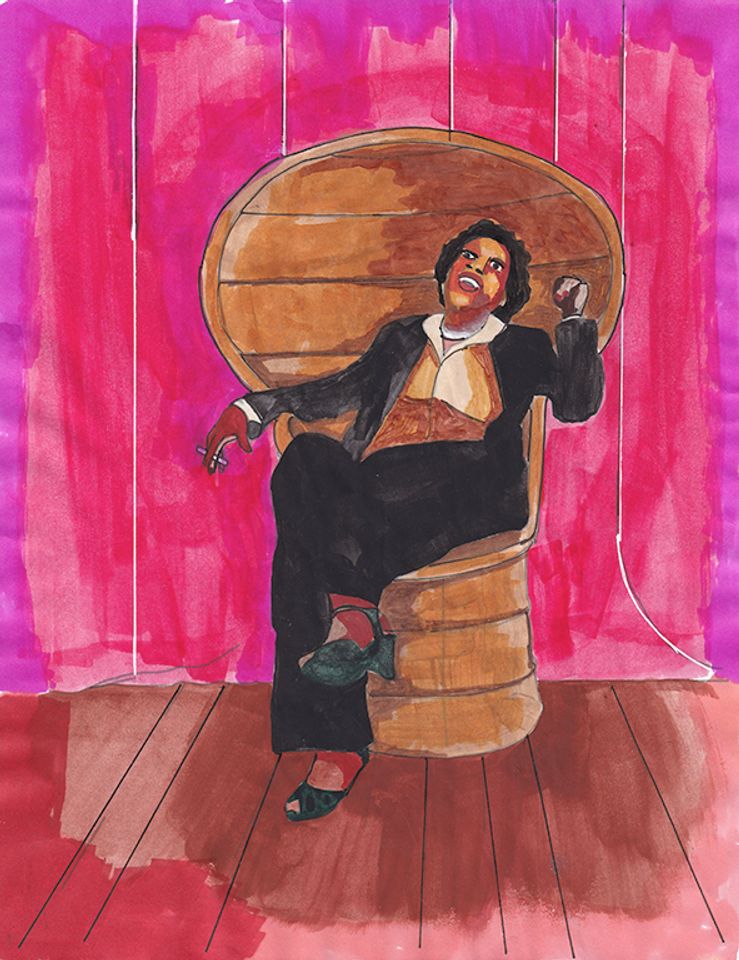 Derrick Adams, Family Portrait No. 8 Courtesy of the artist

The artist’s celebration of his beginnings in Baltimore comes at a time when President Donald Trump has disparaged the city, labeling it a “disgusting, rat and rodent-infested mess” where “no human being would want to live”. The president’s comments were a jab at the city’s longtime congressman, Representative Elijah E. Cummings, who had criticised the Trump administration’s handling of detained migrants at the US border with Mexico.

Adams views Trump’s comments as ill-informed. “You have to know the people in the city to make a general statement," he says. “That’s something that I’ve learned as an adult, being able to travel and connect with people from various communities. So while that comment was very alarming, it was also a signifier of the lack of awareness of the community overall. Baltimore is a really complex place and you have to be there to really know the city.”

At the same time, “it’s his city, too,” the artist says, referring to Trump. “Baltimore is part of the United States and is under the supervision of the president. So it’s unusual that someone would criticise his own city.” 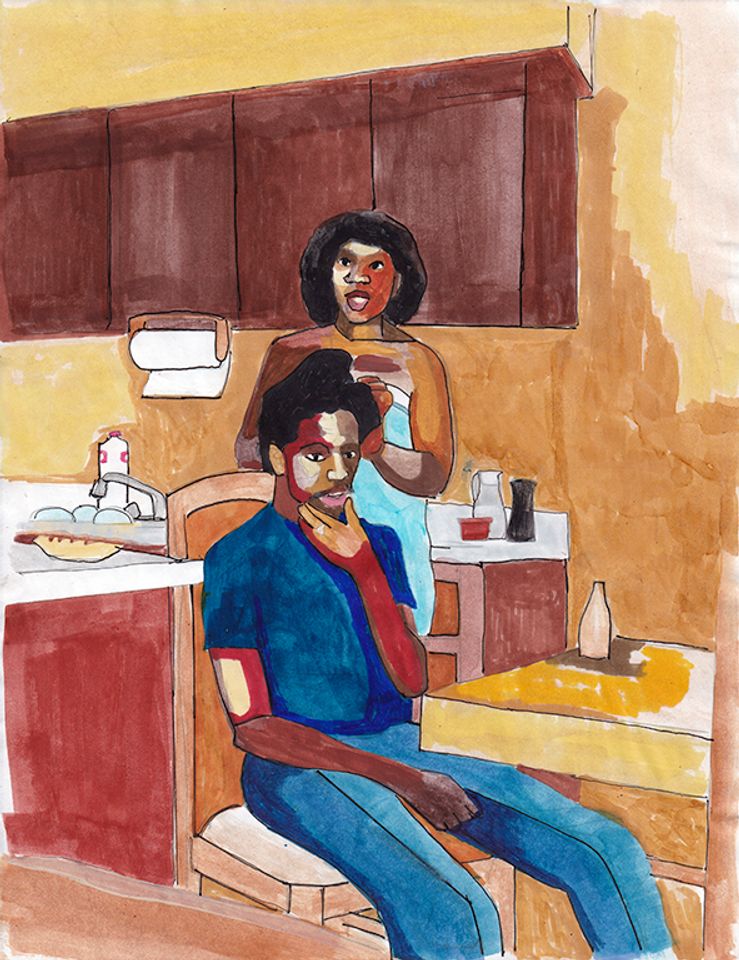 Derrick Adams, Family Portrait No. 7 Courtesy of the artist

Adams describes the portraits, executed well before Trump cast aspersions on Baltimore, as his most personal works to date. Still, he says they fit into the artist's general pattern of “allowing a figure to exist beyond the imposed archetypes that are represented in the media”.

Previous works by Adams have ranged from collages critiquing the stereotypes projected by early broadcast announcers, sitcom characters and newscasters to a mixed-media installation inspired by old guidebooks advising African Americans on places they could safely enter while travelling. 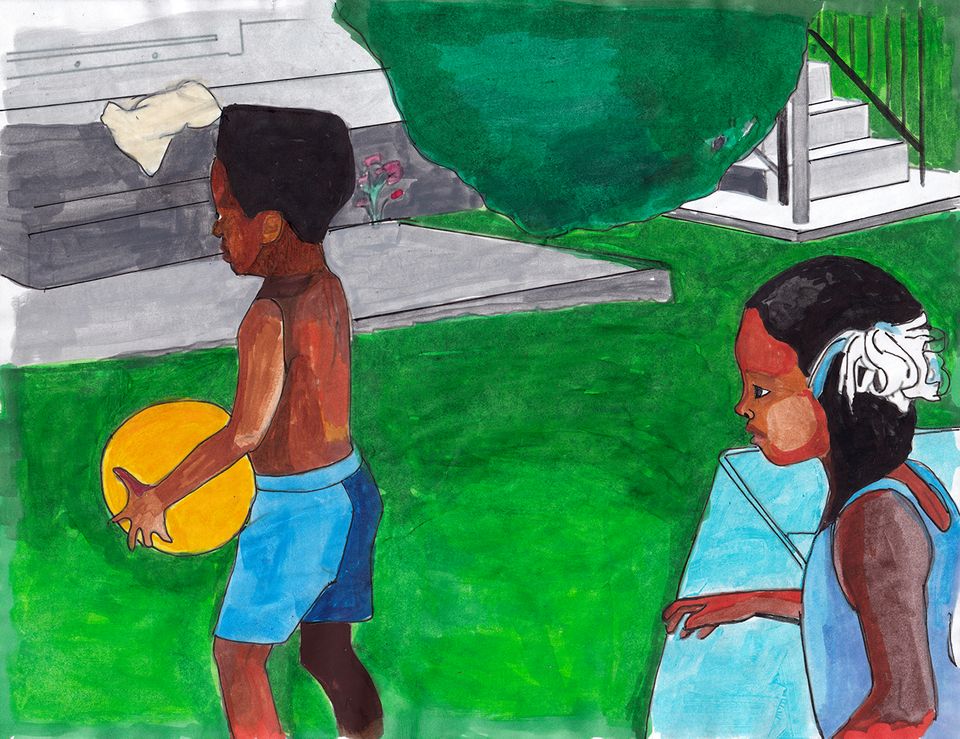 Derrick Adams, Family Portrait No. 9 Courtesy of the artist

This time, he says, he is “representing people in a way that not only I feel good about but I hope they feel good about. Sometimes normalcy can be entertaining, too.” Among his favourites are a portrait of a “super-progressive” aunt sitting in a fan chair while laughing and another of a christening with the godparents, including Adams’s mother, in attendance.

“These are the people who help me to be who I am,” the artist says. “Sometimes the people who are your heroes may actually be right in front of you.”