In pictures: Disco balls and whale watching at Design Miami/Basel

This is what caught our eye

A disco, Roman architectural elements, furniture created using AI, chairs designed by the pioneering Italian designer Gaetano Pesce and a table by the French sculptor César: the 13th edition of Design Miami/Basel presents an eclectic mix of the latest offerings in the best of contemporary and Modern design. Here is a sample of what caught our eye. 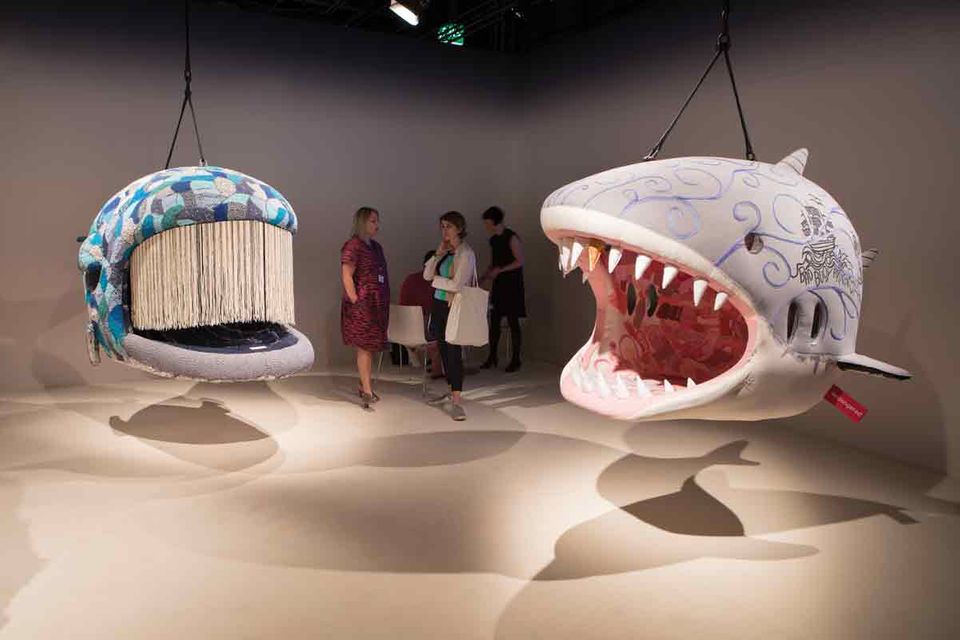 If you have ever wondered what it is like to be inside the belly of a whale, now is your chance to find out—and it is for a good cause. The South African designer Porky Hefer has joined with the Leonardo DiCaprio Foundation and SFA Advisory to create a series of works that draw attention to endangered wildlife. For his latest series, Hefer has recycled materials such as old t-shirts and water bottles to create five of his characteristic animal-form nests. Each features an animal threatened with extinction: a whale named Wendy after the designer’s mum, an orangutan called Yelda, Sandy the shark, Trevyn the sloth and Quasiqtuk the polar bear. “The idea of these pieces is to take away all the senses, control things such as light and sound, so the muffled sound you hear is what you would have heard in your mother’s womb,” says Hefer, who worked with three artisan communities in Africa to create the pieces. Proceeds from the sale of the cuddly creatures will go to the foundation. 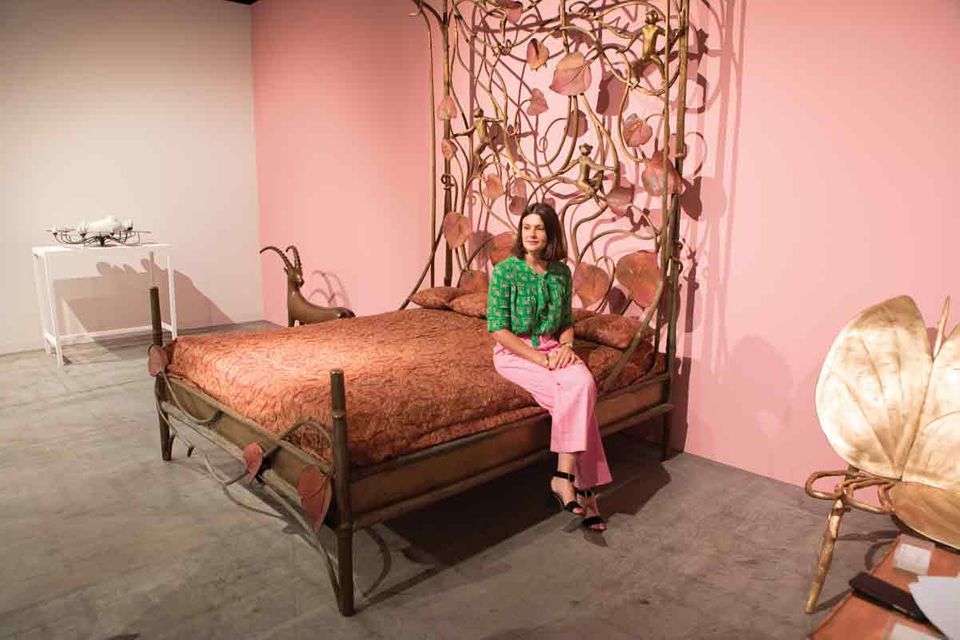 At the fair’s VIP preview on Monday, a stream of collectors was seen lounging on Claude Lalanne’s Monkey bed at Galerie Mitterrand’s stand, which is a celebration of works by Claude and her late husband François-Xavier Lalanne. Commissioned by a private collector for her Parisian home, the one-off bronze-and-copper bed shows Claude’s enduring interest in the natural world. Conceived as a jungle in the style of Henri Rousseau, the sculpted metal bed frame takes the form of bamboo while four monkeys can be seen swinging from vines that make up the elegantly crafted headboard. The piece is rumoured to be one of the most expensive works at Design Miami/Basel. 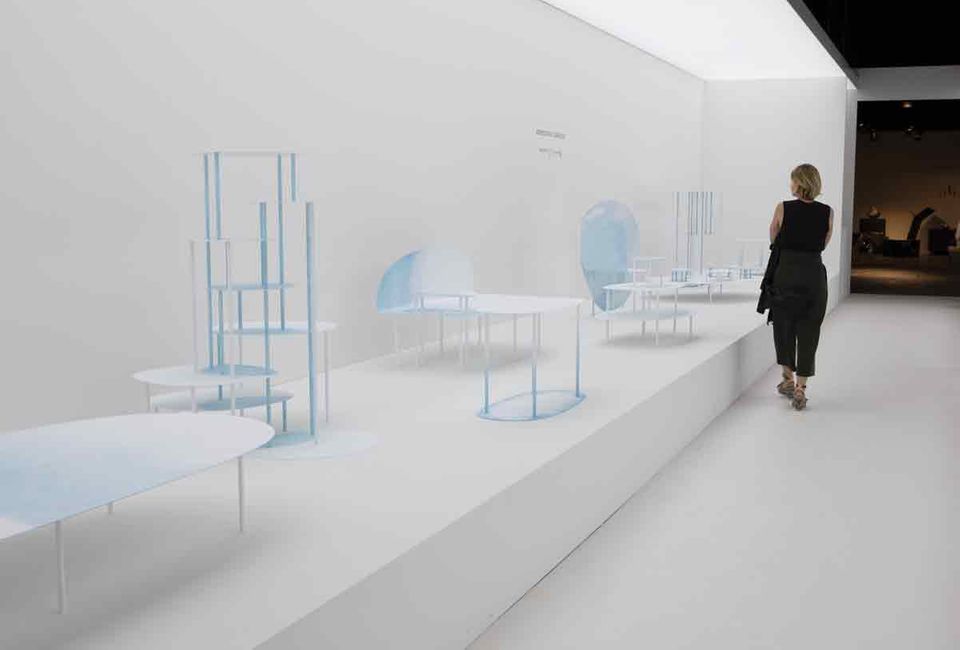 The Japanese design studio nendo, founded in 2002 by Oki Sato, spent two years creating this 18-piece painted-metal furniture collection that looks like pieces of folded paper. “I’m always twisting, bending and folding metal, treating it as if it were paper,” Sato says. “I’m interested in blurring the boundaries between two-dimensional and three-dimensional objects.” For his watercolour series, the challenge, he says, “was to find a paint that was slow drying enough that we could smudge it”, to mimic the effect that watercolour has on paper. Six different shades of blue aqueous ink were used to create the desired effect. 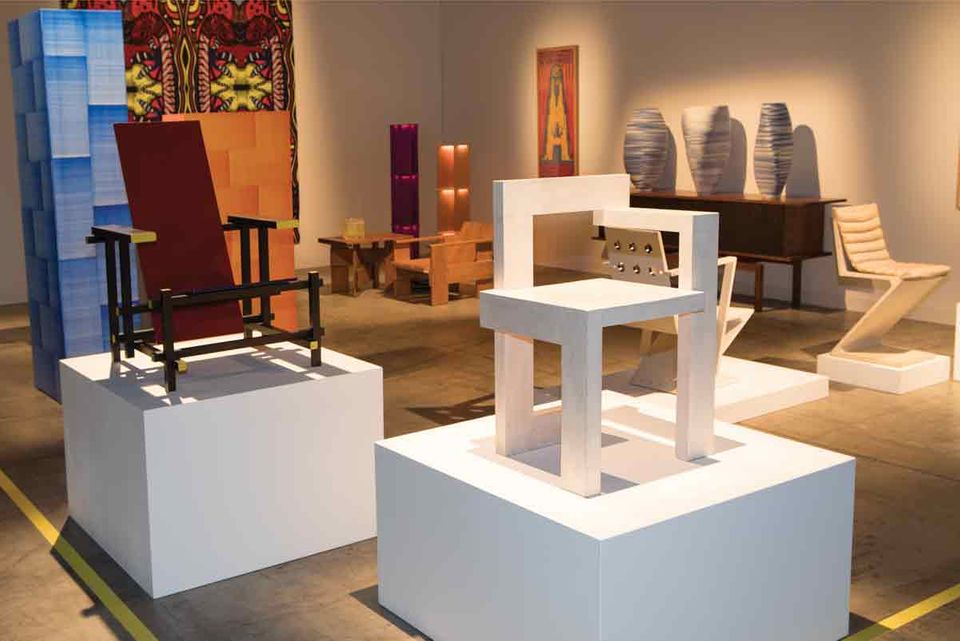 This is the last chair designed by the Dutch architect and designer Gerrit Rietveld, a key figure of the influential De Stijl movement, which celebrated its centenary last year. The wooden prototype, formed of three right-angled pieces, is named after The Hague-based jeweller Steltman for whom it was created. The idea was that it could be used for couples wanting to try on engagement rings. Rotterdam’s Galerie Vivid has juxtaposed this piece with Rietveld’s earliest and most widely recognised chair design, the Red Blue Chair (1918). 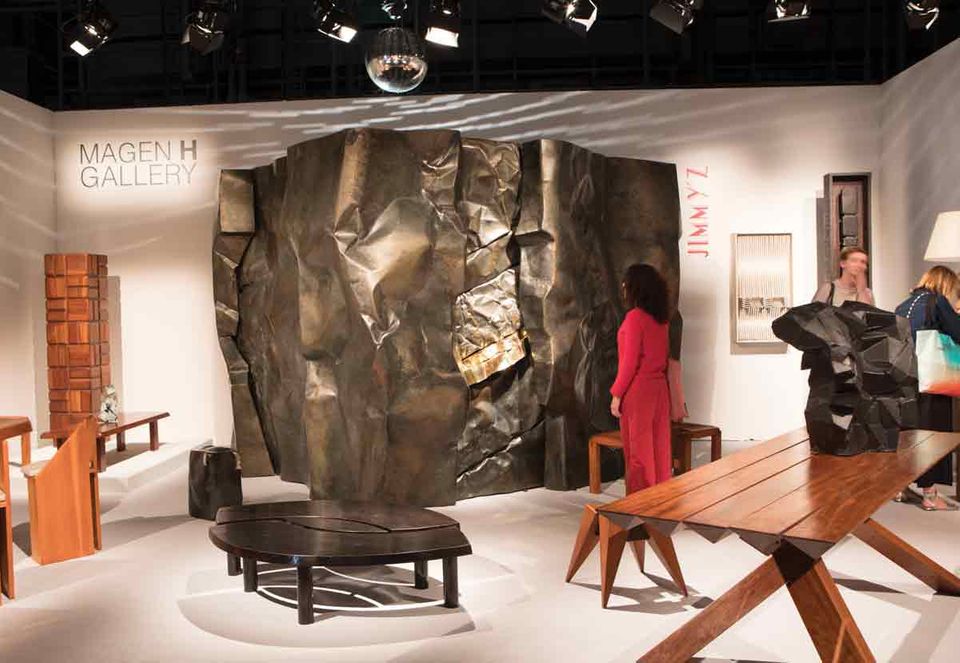 A disco vibe permeates the ground floor and continues up the escalators at Design Miami/Basel, where visitors will find a massive wall installation from the Monte Carlo nightclub, Jimmy’z, thanks to New York’s Magen H Gallery. The stamped, folded and oxidised copper-and-brass take on a 14th-century Italian grotto was sculpted by the French artist Pierre Sabatier (1925-2003) for the hotspot frequented by Formula 1 superstars and celebrities. The sculpture that once led partygoers to the dancefloor was removed from Jimmy’z in 2017. The gallery, which specialises in French post-war designers, will pay homage to the work’s original location by hosting a mini disco on its stand, complete with champagne, a DJ and, yes, a disco ball, from 5.30pm to 7.30pm today. 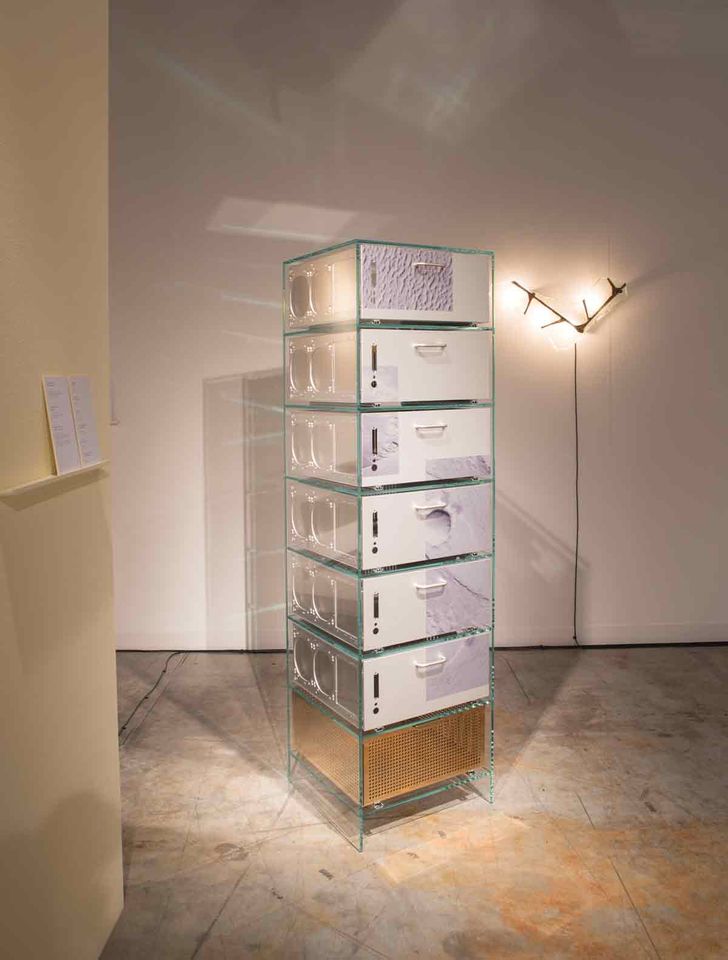 Recycling is a key element of Studio Formafantasma’s Ore Streams series, which explores humankind’s obsession with sourcing metals and our growing demand for mass-produced objects. Formafantasma, a duo made up of Italian-born, Amsterdam-based designers Andrea Trimarchi and Simone Farresin, has repurposed electronic waste, such as keyboards, microwave oven parts and the ubiquitous iPhone, to create pieces of furniture. The pair have stripped the motherboards, fans and disk drives from seven aluminium computer towers to create drawers for this cabinet that also incorporates glass and digital prints.