In pictures: the ideal home, at Design Miami/Basel

The fair has a domestic vibe this year, from Jean Prouvé's house for wartime refugees to Max Lamb's metal-sprayed polystyrene furniture

There is a definite domestic feel to this year’s Design Miami/Basel. The first thing visitors see when they step off the Hall 1 Süd escalator is a wooden house designed by Jean Prouvé to rehome displaced French villagers after the Second World War. Many of the dealers have made their stands resemble much cosier living spaces, complete with carpeting and wall decor. Domestic it may be, but that’s not to say the pieces lack museum quality. “People have really brought it this year,” says Rodman Primack, the design fair’s executive director.

The Paris- and London-based gallerist Patrick Seguin has brought a piece that is both historically important and newly relevant in light of the current refugee crisis. Jean Prouvé designed the 6 x 9 Demountable House in 1944 as part of France’s reconstruction effort to resettle villagers in Lorraine whose homes were destroyed by wartime bombing. Prouvé was a “visionary, humanitarian and philanthropist”, Seguin says, and he conceived these homes to be built easily and quickly. The basic materials—industrially folded aluminium and wood—were shipped straight to villages, and just three people could assemble one house in a day. But because of supply shortages after the war, and the focus on creating more permanent buildings, Prouvé’s refugee homes were created in a very limited run, and few survive to the present day. The one rebuilt on Seguin’s stand features mostly original materials and has been fitted with period furnishings that give the space a rustic but chic clubhouse feel. “It has been my dream since I was a child to live in a cabana,” Seguin says. 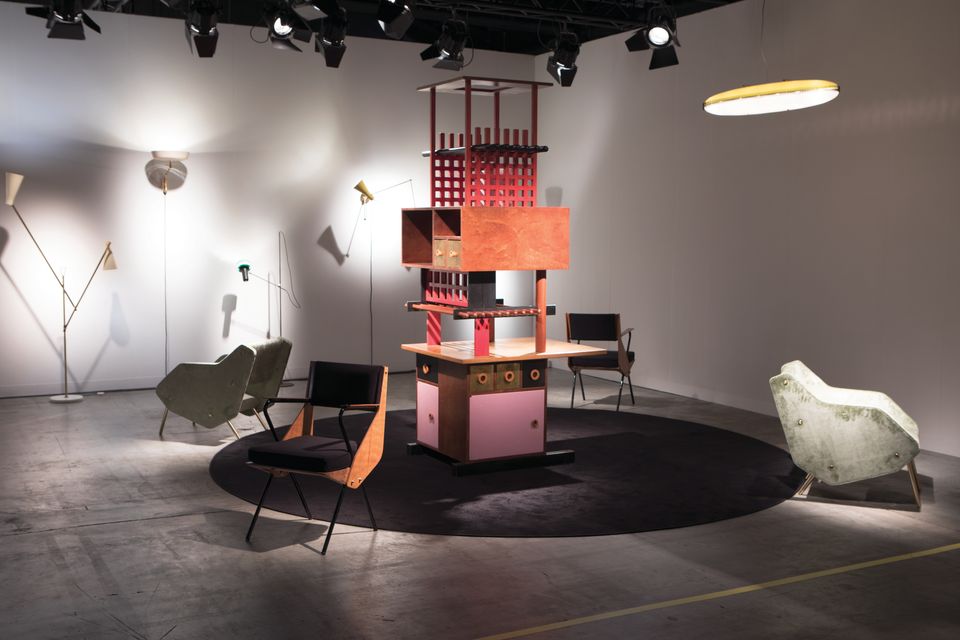 Just a week before the fair opened in Basel, Rome’s Galleria Giustini/Stagetti secured a rare and important work by the postmodernist Italian designer Ettore Sottsass. Tower Cabinet was the centrepiece of Sottsass’s interior design for the home of his friend and colleague at Olivetti, the Chinese-Italian engineer Mario Tchou, who helped to build Italy’s first mainframe computer. The piece remained with the family for more than 55 years. It was consigned to the gallery by Tchou’s daughter, who was photographed by Sottsass playing on the cabinet as a child for a feature he wrote about his designs for “La casa con la bambina cinese” (the house with the Chinese girl), as he called it, for Domus magazine in 1963. The work sold to a US collector for around €450,000. The new owner has promised to lend it to the major Sottsass survey that is due to open next month (21 July-8 October) at the Metropolitan Museum of Art in New York. 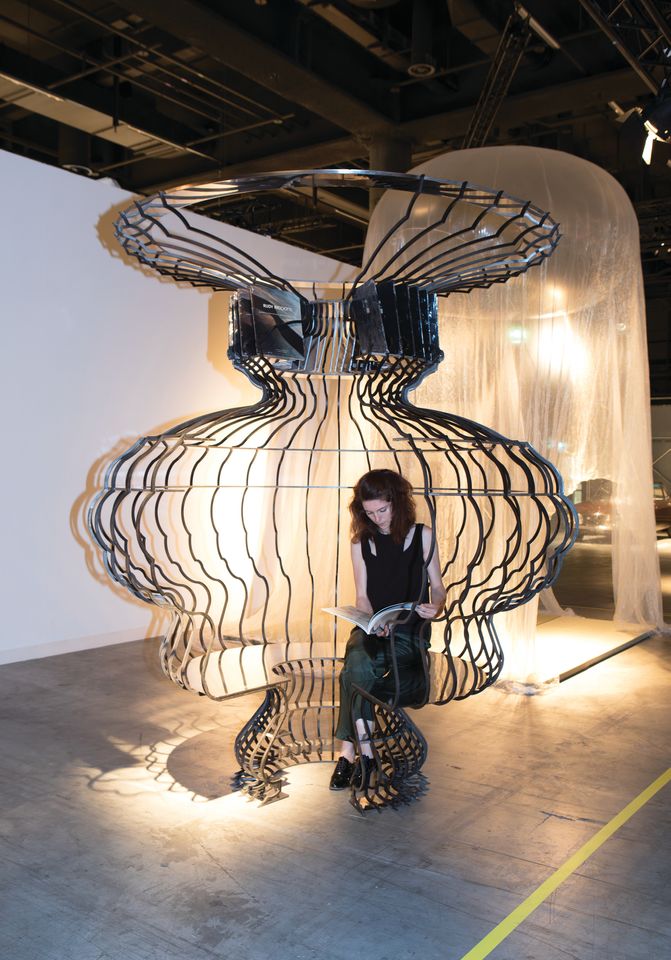 There are many examples of furniture and design objects created by architects at the fair this year, but some of the most eye-catching and original are Sou Fujimoto’s metal book cages. The steel-framed, vase-shaped pieces are both inventive and functional, serving to hold and display books and magazines in open, spiralling curves instead of flat stacks. Some even double as miniature reading rooms. The works could also satisfy an urge for collectors to have a piece by a big-name architect in their home when they cannot get on the waiting list for a building. 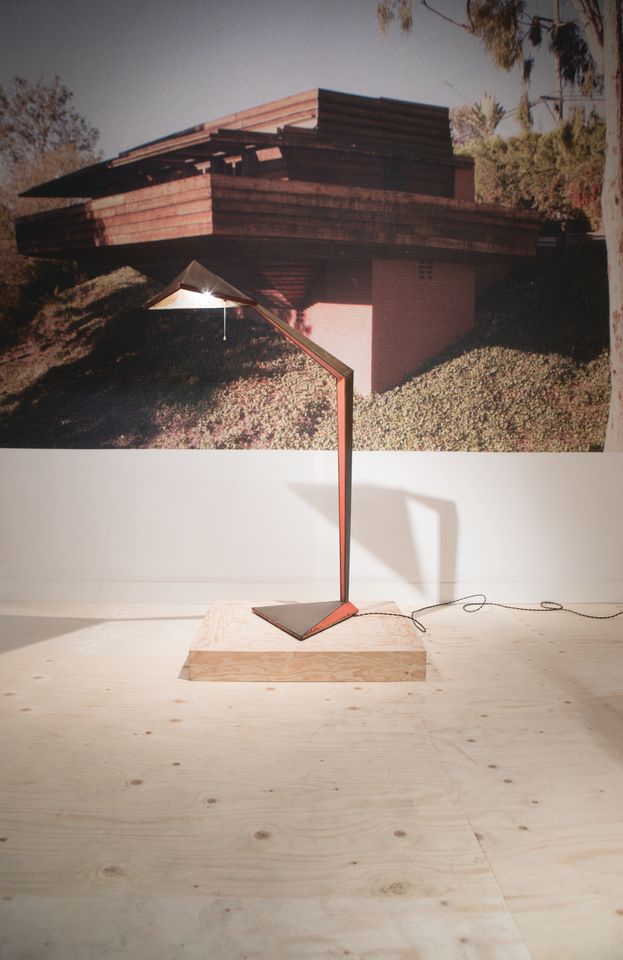 One of the rarest works in the fair might be a lamp on Eric Philippe’s stand, one of two examples by the US architect John Lautner for the George Sturges House, a Frank Lloyd Wright-designed Modernist private home in Brentwood, Los Angeles. Lautner oversaw its construction. His geometric lamp in patinated steel, red lacquer, copper and wood sold on opening day for $85,000. 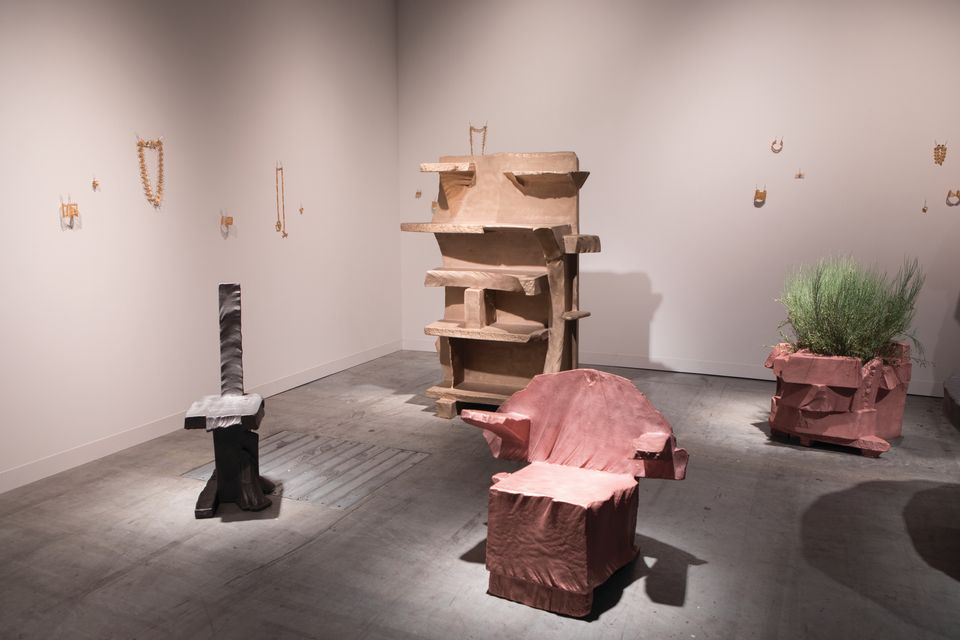 The young British designer Max Lamb expands his series of polystyrene furniture with a new line coated in metal skin, including bronze, steel and copper. Lamb uses a high-tech gun that creates a plasma arc to melt metal wire and spray it in thin layers with compressed air. “It’s literally like a ray gun,” Lamb says. He got the idea for the application after watching a video of an apple being thermally sprayed, and realised that if a fruit could be treated with metal in this way without being damaged, so could polystyrene, transforming something “so insubstantial and fragile and meltable” into a more enduring object. The Haas Brothers bring their irreverent style to carpets with a new series created as part of a collaboration between the gallery R & Company and the Italian carpet-makers Amini. Riffing on the classic animal-skin rug, the designers have squashed now-extinct animals including a rainbow-striped quagga, purple-hued dodo and cheery pink woolly mammoth. The pieces are also included in a group exhibition, Woven Forms, now on view at the Palazzo Benzon in Venice (until 31 July). The dreamy, vine-like coat hanger that creeps around the door on Jacques Lacoste’s stand is the only known example of this design by the French Modernist Jean Royère. It was commissioned in 1966 by an anonymous collector, identified by the gallery only as “Monsieur B”, for his country home in Fontenoy, France, and has remained in the family ever since. “These commissions came quite late in Royère’s career; consequently, they demonstrate a great command of his iconic models, which he enjoyed redesigning with a twist,” writes the art historian Françoise Claire Prodhon.