In pictures: The Kiss, a crash and Bikini Atoll

Fairgoers can’t seem to walk by Urs Fischer’s Plasticine version of Rodin’s The Kiss without needing to put their artistic skills to the test. “Everybody likes to touch,” Wetzel says. “You can already see how much the work has changed since the fair opened on Tuesday.” He likes the interactive element of the piece as it fits into the Tinguely Museum’s ethos of involving visitors in the collection. “I think Fischer has done this in a very clever way with this work,” he says. The piece also touches playfully on the act of destruction and behaviour outside the boundaries of convention. But Wetzel is less interested in destroying than restoring it. “I think I fall into the group that is more concerned with repairing it; I feel like I should be trying to fix it,” he says, as he tries to smooth the imprints left by others. 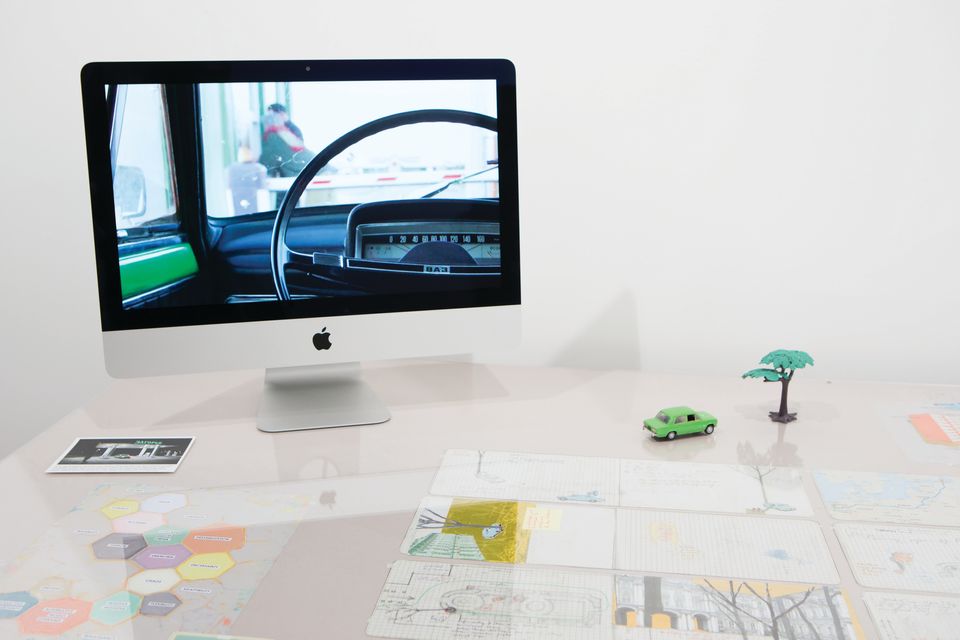 This video and installation piece tells the story of the ill-fated road trip from Belgium to St. Petersburg that Francis Alÿs attempted with his brother in the early 1980s. Unfortunately, their 1981 Lada Riva broke down along the way and so the pair never reached their destination, then behind the Iron Curtain. Thirty years later, the Belgian artist enlisted his brother to recreate the journey for his project for Manifesta 10 at the Hermitage in 2014. “The personal history of the work is interesting because Alÿs and his brother were once close but had drifted apart and gone in different directions over the years, and yet they decided to do this project together,” Wetzel says. “At the end of the video, when they reach St. Petersburg, the car crashes into a tree so there is this act of destruction—the shedding of this personal history and looking to the future. This is also like Tinguely, who saw destruction as a way of opening up space for new things.” 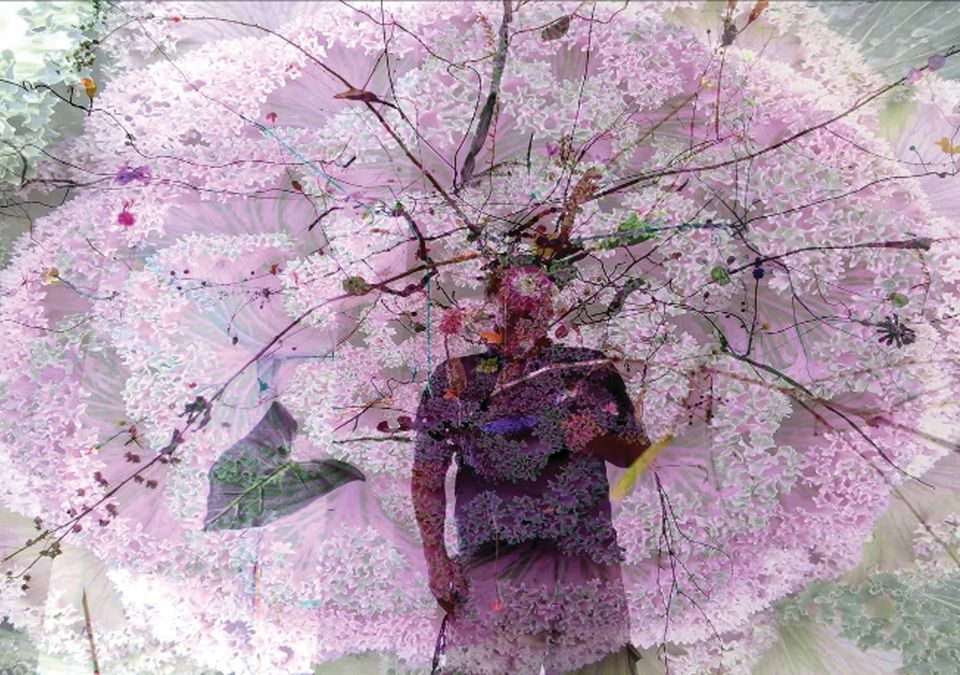 Farbe der Forschung is a mesmerising video piece by the Swiss artists Gerda Steiner and Jörg Lenzlinger, who work in many different media, including collage, drawing, installation and textile. The pair gained international attention at the 2003 Venice Biennale where their huge site-specific hanging botanical sculpture was installed in the middle of the San Stae church with mattresses underneath, so people could lie on the floor and look up at it. Wetzel says: “Gerda’s work is often about colour and nature, whereas Jörg tends to have a more scientific approach. They often create pieces that show the hidden qualities of objects and materials. For example, for a show in Japan they collected actual tears from visitors that were then put under a microscope and projected onto the wall.” “This piece contains a little bit of everything: politics, such as the words ‘Trump on the gropes’, which was actually made before Trump was elected; and comments on anti-consumerism,” Wetzel says of Michael Landy’s ongoing series Breaking News, which features red-and–white drawings and words such as “A-Hole” and “Bernie” on sheets of torn paper. “Landy is a wonderful artist,” Wetzel says. “He did extensive research on Tinguely’s Homage to New York, the first self-destructive work in the history of art, which the Swiss artist showed at the Museum of Modern Art’s sculpture garden in spring 1960. Among a lot of other works, Landy created a film in which he interviewed many people who were present at that time. Very often, he develops his critique towards consumerism in long-term projects, where a lot of research and personal involvement is [part of his process]. In his multifaceted work, he is sharp, persisting and humble at the same time.” The Basel-born artist Miriam Cahn works in a wide range of materials: painting, film, sculpture, drawings and writing. For Art Basel, Galerie Jocelyn Wolff of Paris has brought a large-scale painting of a haunting figure prostrate on the ground. “Her works are often disturbing and show the vulnerability of the body and the inner fights of creating images,” Wetzel says. “She combines intuition, humanity and political radicality in a unique way. There is a lot of power and emotion in her images. I love her work very much; it touches me in a very direct way.” 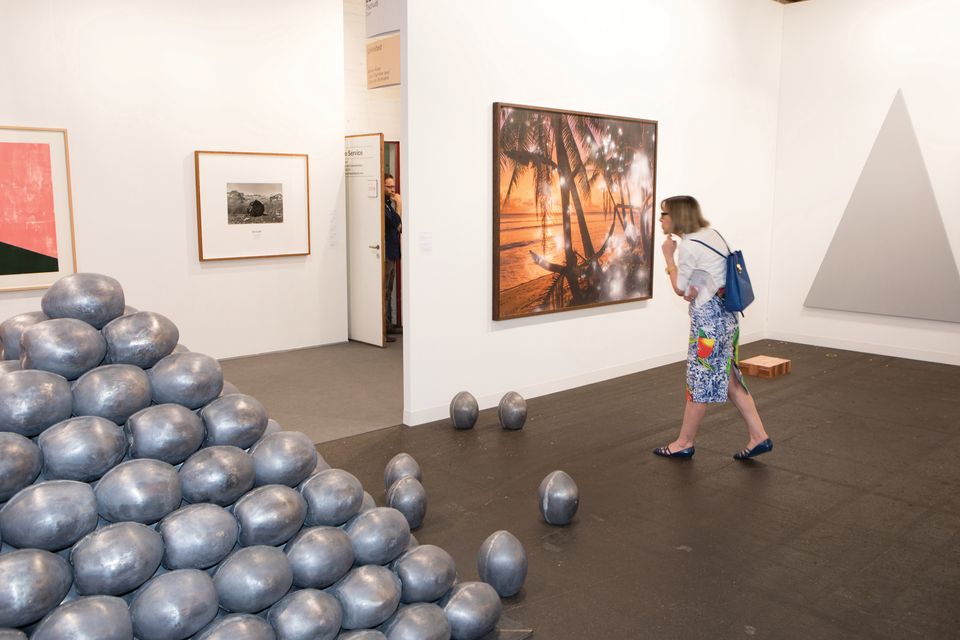 A pyramid of lead coconuts and a large-scale photograph of what looks like a typical postcard of a far-flung tropical island dominate the stand of Galerie Tschudi. Both are works by the young Swiss artist Julian Charrière. “At first glance, Poplar—First Light just looks like a 1970s photograph that someone might hang on the wall of their living room or bedroom, but there is an underlying context to it that is not immediately apparent,” Wetzel says. It depicts Bikini Atoll in the Marshall Islands, where the US conducted more than 60 nuclear tests in the 1940s and 1950s. Charrière introduced radioactive sand in the developing process, which caused curious white spots to appear in the photograph. Pacific Fiction—Study for a Monument is also from the artist’s excursion to Bikini Atoll. For this piece, he gathered coconuts—which along with everything else on the island have been exposed to radiation—and wrapped them in lead to contain the danger. “It’s interesting because he is protecting us from ‘nature’ and it’s usually the other way around,” Wetzel says.