In the aftermath of far-right riots in the German town of Chemnitz, an artist’s wolves act as a warning

Rainer Opolka’s bronze sculptures, some making Nazi salutes, on show in Chemnitz for one day only 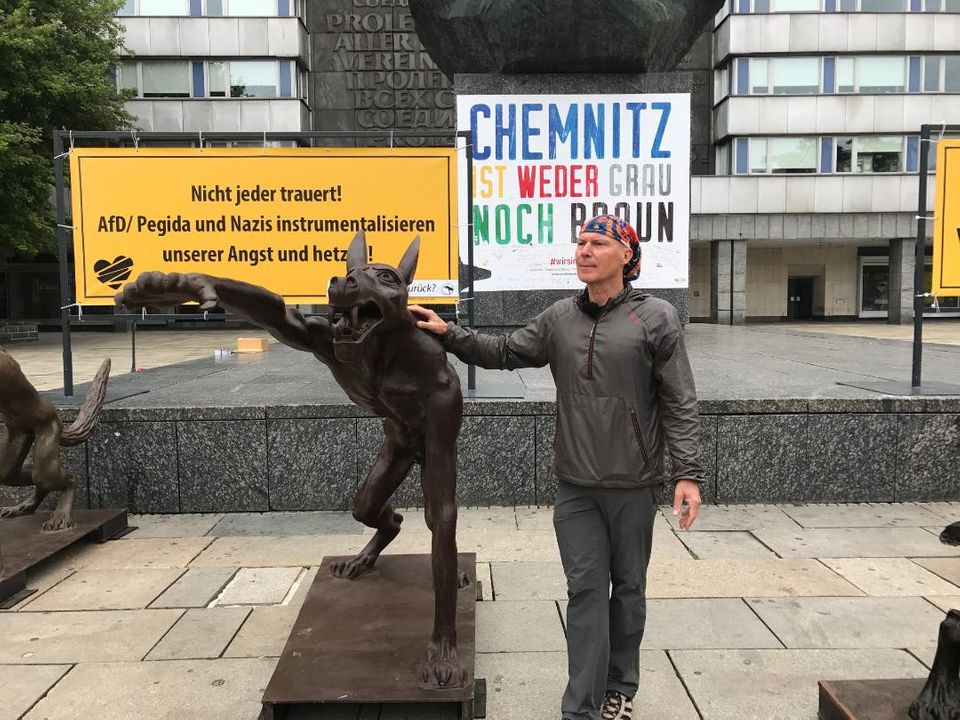 Today (13 September), a pack of larger-than-life, snarling bronze wolves has been installed in Chemnitz, the city in eastern Germany that was the site of far-right riots at the end of August.

Chemnitz is the latest stop in a national tour for the artist Rainer Opolka, who has been exhibiting his pack of wolves in German cities for more than two years. To him, it is not just an artwork but also a political demonstration—he wants to warn against the return of hate and extreme politics to Germany.

Opolka says his sculptures, The Wolves are Back?, represent the ugly side of German society. “Neo-Nazis describe themselves as wolves. That’s their symbol,” he says. After far-right protesters were filmed in Chemnitz shouting racist slogans and performing Nazi salutes, the artist says he wants to remind Germans of their history.

“I want to make the people think,” Opolka says. “Eighty years ago,German people's symbol was the Hitler salute. I don’t want to see that anymore in Germany. 99% of the people in Chemnitz don’t want that either.”

At the end of August, violent demonstrations broke out in Chemnitz after a German-Cuban man was stabbed and killed. When two men—one Iraqi, one Syrian—were taken into custody in connection to the murder, the story quickly spread online, with the far-right using the arrests to incite anger against migrants. Within hours, 800 people had gathered on the streets. Protestors were filmed chasing people they assumed to be foreign, and the police are investigating uses of the Nazi salute, which is a crime in Germany.

Watching the riots unfold from his home in the eastern state of Brandenburg, Opolka was shocked. “We couldn’t imagine that could happen today in a German city,” he says.

Opolka has installed his ten bronze wolves in front of Chemnitz’s famous Karl Marx statue, where the demonstrators gathered two weeks ago. Five of the wolves are frozen in the Nazi salute—a jarring image for a city that is still recovering from recent events. The wolves will stay in Chemnitz for one day only, coinciding with the first Nazi salute trial at Chemnitz District Court.

“When I first built the wolves showing the Hitler salute, I thought maybe I was wrong, maybe this was in the past. But after what happened here in Chemnitz, I think it is very relevant—now more than ever,” Opolka says.