State government pledges to build permanent venue for the event

Organisers of the Kochi-Muziris Biennale, the flagship art gathering in India founded and organised by some of country’s leading contemporary artists, struggled through India’s “demonetisation” crisis to make poetry and performance the beating heart of the exhibition, which opened this week (until 29 March 2017). Organised this year by the artist-curator Sudarshan Shetty, whose work has been shown in the Tate and the Guggenheim, the biennial includes an increased number of international artists among nearly 100 on show.

But India’s “demonetisation” in November in which significant rupee notes were suddenly withdrawn from circulation by the government with limited replacements made the experience more challenging for visitors, artists and organisers who said they were struggling to pay workers. Bureaucratic issues also resurfaced, exasperating several visiting artists on the eve of opening.

The biennial received a boost when at the official opening the government of the southern state of Kerala promised $1.1m funding and support for a permanent venue to cement its place as the Venice Biennale of South Asia. Chief Minister Pinarayi Vijayan, who is the leader of the Left Democratic Front government and long-time secretary of the Indian Communist Party in the state, said the biennial matched Kochi’s multi-layered history of settlement by Arabs, Chinese, Jews, Portuguese, Dutch, English and different migrant communities from India. “That is why Kochi is the perfect space for organising an international biennale,” he said.  Vijayan announced 75m rupees in funding for the biennial, the highest sum a state government in India had given an arts event. His government would support a permanent venue for the “mega-prestigious” event that had been the key to the success of the Venice Biennale, he said.

Impressive works on show in the historic port city of Kochi, famous for its rivers and backwaters, include an ankle-deep lake created by the Chilean artist Raul Zurita that visitors could walk through, titled the Sea of Pain, made in memory of Galip Kurdi. He is the brother of Alan Kurdi, the Syrian boy whose body was washed ashore on a Turkish beach; Galip and his mother were also drowned at sea. 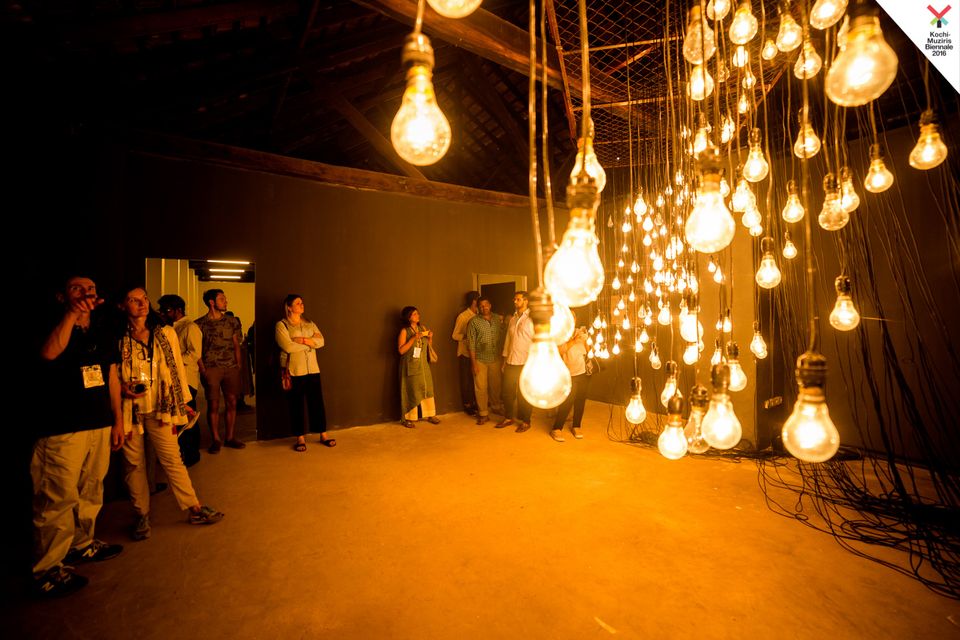 Yardena Kurulkar, an Indian artist, is showing Kenosis, the piece which led to her becoming the first international artist to win the Blake Prize in Australia this year, for which she made a 3-D print of her own heart in terracotta and then photographed it dissolving in water.  A powerful new work, Taphephobia, features white porcelain nails spilling out of a bureau, in an essay on life and death.

Performance highlights include Rehearsing the Witness by Zuleikha Chaudhari, formerly a leading theatre director, which explores a famous 1930s court case about a man who claimed to be the long-lost princely heir to a Bangladesh estate. Chaudhari says that Demonetisation “happened while I was here and I was literally left with no money. For everybody it's frustrating.”

The leading Indian contemporary artist Subodh Gupta said of the biennial: “It’s like Venice. It’s the world’s history, the water front, the history of the town. It’s not exhibited in a white cube space. You get artists exhibiting in houses. It’s like a romance with art.”

Sudarshan Shetty hopes that attendance may be close to 500,000 people. “Every rickshaw person you meet has a favourite work in each biennale,” he said.  “I can’t imagine the same level of participation in Delhi or Mumbai or any other big city in India.”