Patreon account is up! Throw some love 💰 @_the_literati for Mid-Day

As India's Hindu nationalist government continues to clamp down on dissenting voices, it seems that members of its right-wing youth groups are following in their footsteps, having defaced an anti-government street art series in Mumbai earlier this month.

The works in question are by the anonymous Mumbai-based Tyler Street Artist, known as "India's Banksy". Part of his Walk of Shame project, the works painted on an unnamed road in northwest Mumbai depict the names of Indian politicians, journalists and actors who "spread hate and false propaganda" next to images of steaming piles of excrement. 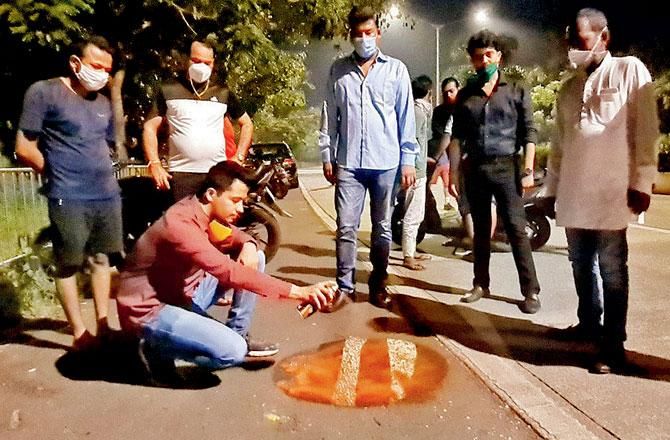 By 5 September, five right-wing public figures had been "shamed" by the project, including the actress Kangana Ranaut and Arnab Goswami, the editor of Republic TV, an Indian news channel that has been accused of spreading fake news and propaganda for the nation's ruling political party, the Bharatiya Janata Party (BJP).

On 6 September, members of the Bharatiya Janata Yuva Morcha (BJYM), the BJP's youth faction, had covered the works in black paint. In retaliation, Tyler painted an image of the Indian prime minister Narendra Modi over one of the defaced works. Subsequently, BJYM members, led by the group's national convener Devang Dave, covered it up once more, this time recording their actions in a video posted to Twitter.

Dave also took to Twitter to demand "the immediate arrest" of Tyler, who he describes as a "low grade painter". "Who is he to name and shame anybody? We too believe in freedom of speech and expression, but there is a certain line that cannot be crossed," Dave wrote.

Tyler's Instagram account was then temporarily disabled for a period of 24 hours, reportedly with no explanation given as to why. Tyler calls the move an "intimidation tactic" meant to dissuade him from continuing with his project.

Although no BJP politicians have yet been named in The Walk of Shame, Tyler makes clear that the work is firmly anti-government. "Journalists and celebrities are paid handsomely to defend the party's shortcomings," he tells The Art Newspaper. "Dots can be connected back to [Modi] without names from his regime being spoken."

The Walk of Shame takes a crowdsourcing approach to its execution, with Tyler deciding who his next target is via the comments on his Instagram posts, which receive thousands of suggestions as to who should be shamed next.

This decidedly populist, social media-based approach to retribution inevitably invites conversations around cancel culture and its relative merits. For his part, Tyler sees this non-violent act as a means to build solidarity within the country's fractured political resistance movement.

"By having people give their votes it creates a sense of inclusivity and allows them to witness their will being actualised. People need to know the strength they have against the government when they are united."

The project began on 15 August—Indian Independence Day—which also marked 375 days since the Indian government controversially revoked the semi-autonomous status of the Muslim-majority state of Jammu & Kashmir. "73 years after gaining independence we still hear hate speeches from radical Hindu organisations. India is unfortunately infested with people who see nothing beyond religion and are driven by blind nationalism."

For now, Tyler says that he is lying low, using his anonymity as protection against a government who in recent months has jailed a number of peaceful protestors and human rights activists. However, he adds that he intends to continue with the project once the controversy has died down and hopes to "get away with at least 25 names—enough for people to enjoy a long walk through".