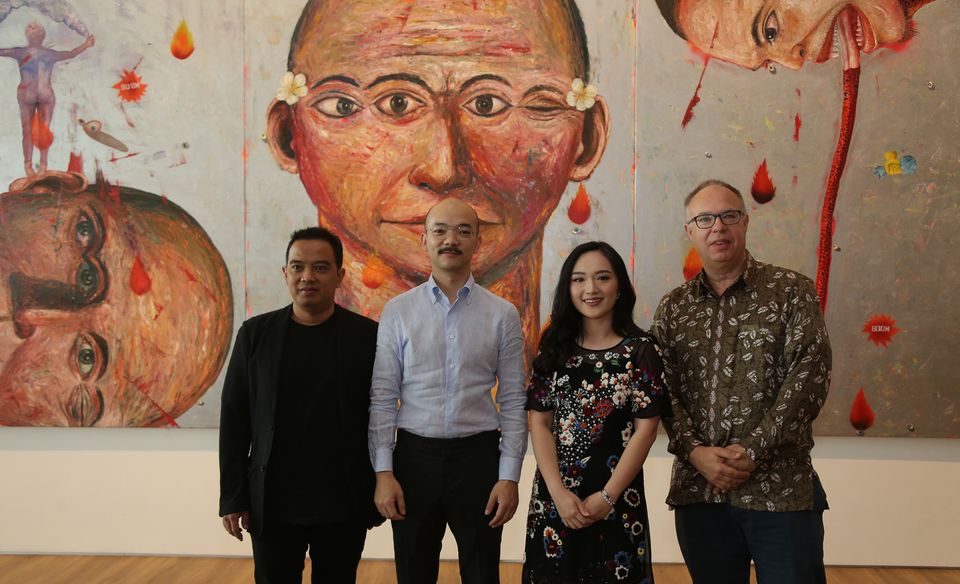 Indonesia’s new private museum of modern and contemporary art opens tomorrow (4 November) in Jakarta with a show of ambition as much as of art. Museum Macan’s inaugural exhibition, Art Turns, World Turns: Exploring the Collection of the Museum of Modern and Contemporary Art in Nusantara (until 18 March 2018), includes 90 works by 70 artists, drawn from an 800-strong collection amassed over a quarter-century by the museum’s founder, Haryanto Adikoesoemo. The long-term loan forms the basis of the museum’s own collecting.

Established names dominate the opening displays, with works by Robert Rauschenberg, Mark Rothko and Yayoi Kusama joining those by renowned Indonesian artists, such as FX Harsono and Arahmaiani. The show is “designed to introduce the collection to the public”, says the museum’s director, Aaron Seeto, formerly a curator of Asian and Pacific art at Queensland Art Gallery. “It tracks the role artists have played in the emergence of the nation-state of Indonesia, and its international relationships in the modern and contemporary periods.”

The organisers are Agung Hujatnika, an independent curator, and Charles Esche, the director of the Van Abbemuseum in Eindhoven and curator of the 2015 Jakarta Biennale. They make a cohesive argument for artists’ engagement with “anti-colonial, national, international and global influences” on Indonesia and southeast Asia, Seeto says. Like the collection, the show represents “a significant geographic range”, encompassing the US, Europe, Korea, Japan, China and Indonesia. Around half of Adikoesoemo’s collection consists of Indonesian art. 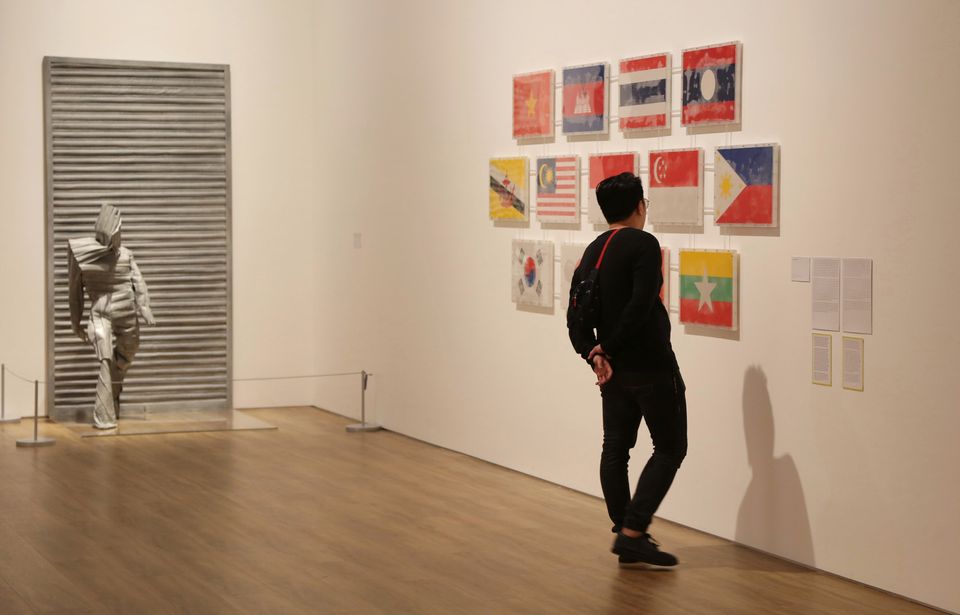 A new commission by the Japanese artist Yanagi Yukinori, ASEAN+3 (2017), includes 13 flags from Asian nations made from coloured sands courtesy of Museum MACAN

The works span 200 years, taking in the 19th-century Javanese painter Raden Saleh and Asia’s major 20th-century movements, including Japan’s Mono-ha, Korea’s Dansaekhwa, and China’s Political Pop and Cynical Realism. There are also new commissions from the Japanese artist Yukinori Yanagi and the Indonesian Entang Wiharso, who has devised a tactile installation and educational activities for the children’s art space.

Adikoesoemo, the head of the chemicals and energy conglomerate AKR Corporindo, has been planning the museum for six years. The 4,000 sq. m building, half of which is exhibition space, was designed by the London-based MET Studio and is the centrepiece of AKR Land Development’s multipurpose Gallery West project in the industrial Kebon Jeruk district of West Jakarta. The cost of construction is undisclosed. Seeto describes the area as a future “lifestyle hub”, with an expanding middle class and a high density of schools, which “supports the museum’s education-centric mission”. 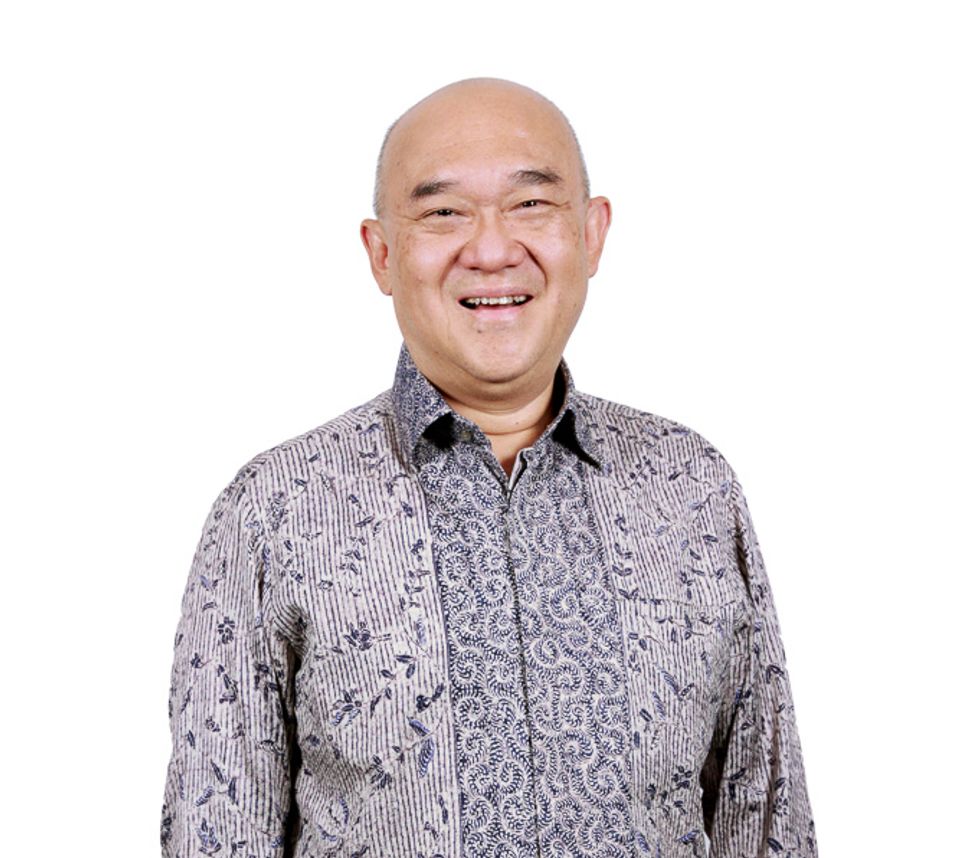 The museum's founder, Haryanto Adikoesoemo, whose collection is on long-term loan Yuwono Widiasta

Funding and governance is overseen by a foundation chaired by Adikoesoemo’s daughter Fenessa. Previously scheduled to open in March, the museum faced an institutional hiccup last year with the abrupt departure of its original director, Thomas Berghuis, the former curator of Chinese art at the Solomon R. Guggenheim Museum in New York.

Nusantara is a Javanese name for the Indonesian archipelago, and Museum Macan aims to be as local as it is international. The growth of Indonesia’s vibrant community of artists and collectors has long outpaced the development of art infrastructure in the world’s fourth most populous country. The museum “supports the broader ecology for art in Indonesia”, Seeto says, paying tribute to a grassroots network that “has been instrumental in developing much of the dialogue between Indonesia and the world among artists and peer organisations”.

However, he adds: “What Indonesia lacks is museum infrastructure, and this is how Museum Macan will be able to fill the artistic gap that concerns education and networking.” (Jakarta's first private museum, Budi Tek's Yuz Museum, quietly closed in early 2014 to allow the collector to focus on a second venue in Shanghai.) The Macan aims to nurture the Indonesian contemporary scene through its art education programmes and “a more holistic approach to supporting artists through their careers”. These are two sides of the same coin, Seeto suggests. “We must create opportunities where ideas can be tested, and where dialogue between an artist and a diverse Indonesian audience can occur.”