The blue chip delusion: why investors should be wary of the brand name lure

Art is pitched as an asset class, but even big-name artists are not guaranteed to hold their value, let alone turn a profit 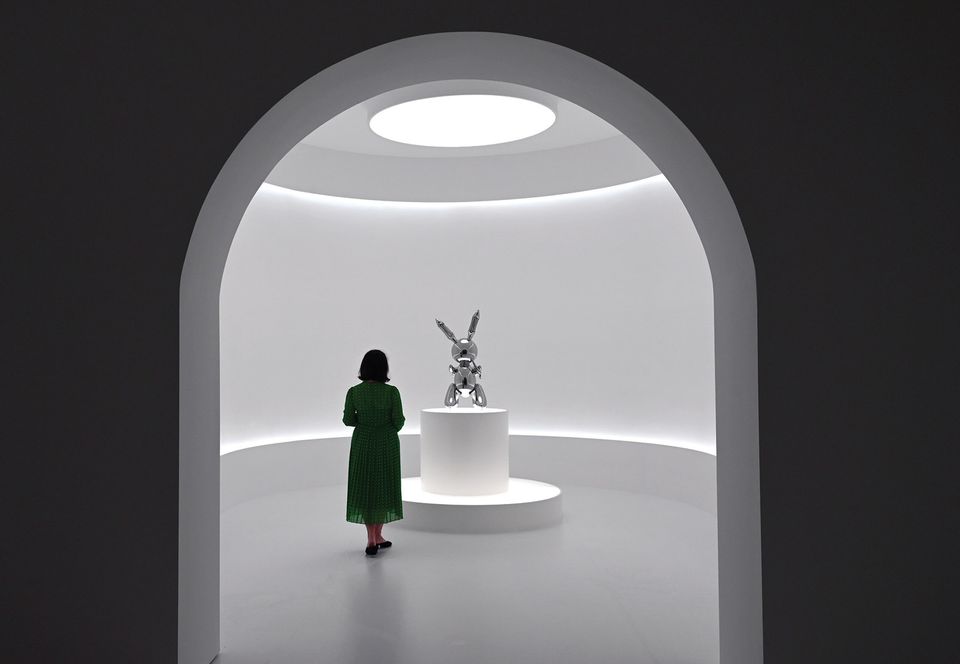 Rabbit (1986) made Jeff Koons the most expensive living artist Timothy a. clary/afp/getty images

As growth in the world’s major economies slows, the art trade is hoping that strong results during the autumn auction season in London, Paris, New York and Hong Kong reinforce perceptions that “brand name artists” such as Warhol, Basquiat, Richter, Koons and Bacon are gold-plated assets.

“Blue chip”, “investment grade”, “bank-able”—there is a list of well-known artists whose works have a reputation for yielding solid, sometimes stratospheric, returns for their owners.

In August, the French-based auction results database Artprice published a half-year report on the global art market. Its index shows a 5% overall increase in prices, with 16% growth for the Artprice100 index of “blue-chip” artists “designed for financiers and investors”, which it launched last year. “With the banking sector operating in a negative or near-zero interest rate environment”, art’s latest investment returns were “bound to add momentum to the market’s expansion”, the report says.

But while the volume of 262,300 fine art auction transactions in the first half of 2019 was roughly the same as in the equivalent period last year, the total of $7bn of sales was 17.4% down.

So should investors put their money in art, particularly brand-name American and European contemporary art, as a blue chip asset that can “weather downturns and operate profitably in the face of adverse economic conditions”?

That is a difficult call. Artprice, like Mei Moses and other art market indices, uses a “repeat sales” methodology to track the price of works sold and resold at auction. But art auctions typically fail to sell between 10% and 30% of their lots, and unsolds are not factored into the Artprice or Mei Moses headline figures. Nor are the hefty fees levied by auction houses on both buyers and sellers of successful lots, particularly at lower values. Combined fees can amount to more than 30% of the published price, significantly diluting investment returns.

“The term ‘blue chip’ has validity insofar as the concept implies well-established historical art and artists of the highest aesthetic quality, which are simultaneously considered to be a reliable long-term investment,” says Todd Levin, a New York-based art adviser. He adds that blue-chip art is less volatile because it has institutional status. This is textbook thinking in the art market and feeds into advice given to wealthy new investors.

But Christine Bourron, the founder of Pi-eX, a London-based auction analyst house, disagrees. She believes that blue chip does not apply in the art market. “Art works do not pay dividends. On the contrary, they cost significant money to hold,” she says. “Rather than steady upside movement in value, the value of art works tends to vary widely even for some of the best brand-name artists.”

Take Christopher Wool, a much exhibited US artist represented at most major fairs and auctions. Some $70m of his works sold at auction in 2018, putting him 24th in the Artprice100 ranking, which ignores what the index describes as “the most volatile artists (those most subject to the price impact of fashion and speculation)”. Yet Wool’s auction prices declined 9.6% in 2018 and Pi-eX research shows that, in the first half of this year, a Wool painting that wasn’t guaranteed by a third party would have had a 50% chance of not selling.

when it comes to investment, artists aren’t blue chips, they are gambling chips

In May at Sotheby’s in New York, John Sayegh-Belchatowski was reportedly the owner of Wool’s 1990 word painting FOOL which sold for a low-estimate $14m. The French collector-trader had bought the work at auction in 2014 for $14.2m, so he sold at a loss. Yet Wool was among the 32% of the lots in the Sotheby’s, Christie’s and Phillips evening contemporary auctions in May that were certain to sell because they were covered by third-party guarantees, according to Pi-eX.

“The art market is extremely volatile,” Bourron says. “Irrevocable bids suppress the volatility, converting potential bought-ins into successful sales.” She adds that third-party guarantees “can make quite a difference and give the impression that the artist is a blue chip”.

In May, Jeff Koons became the most expensive living artist when his 1986 Rabbit sculpture sold for $91.1m. Yet Artprice data reveals that $100 invested in a work by Koons in 2000 would now be worth $54—auction prices for the artist were down 21% in 2018.

No such thing as risk-free

“Some artists have accrued towering and solid reputations, and this being so the price of their works reflects that,” says Fatima Maleki, a London-based collector and museum patron. “Any idea that art acquisition can be carried on risk-free because of that is wrong in my opinion.” In February 2016, a Maleki-owned Gerhard Richter abstract, estimated at £14m-£20m, was withdrawn just before a Sotheby’s auction, without explanation.

With the UK due to leave the EU on 31 October, collectors have been predictably reluctant to enter high-value consignments into the contemporary auctions that coincide with the Frieze London fair. But Christie’s is offering a standalone sale of works from the collection of British businessman Jeremy Lancaster, who died in April. Lancaster bought works by the Canadian artist Philip Guston from the London gallery Waddington during the 1980s and 90s. Guston became Artprice’s 47th biggest-selling artist at auction in 2017, the year of his major retrospective at the Accademia gallery in Venice.

Back in 1993, Guston’s Language I (1973), estimated at $200,000-$250,000, failed to sell at a Sotheby’s day sale. Two years later, Lancaster bought it from Waddington. Guston has since been hailed as the unsung hero of American postwar figuration. What was a day auction dud back in 1993 will be offered at a Christie’s evening sale this month with a low estimate of £1.5m.

“The best investment will be to acquire the leading artist of his or her generation when the artist is young and to hold the work for a long, long time,” says Danny Goldberg, an Australian collector of American emerging art. He adds that such an “acquisition is likely to have been a fluke, but we all need a bit of luck in our journey!”

Lancaster might not have had the opportunity or the prescience to buy Guston—or indeed Richter—when the artists were young, but this possible windfall for his heirs still underlines Goldberg’s point: when it comes to investment, artists aren’t blue chips, they are gambling chips.