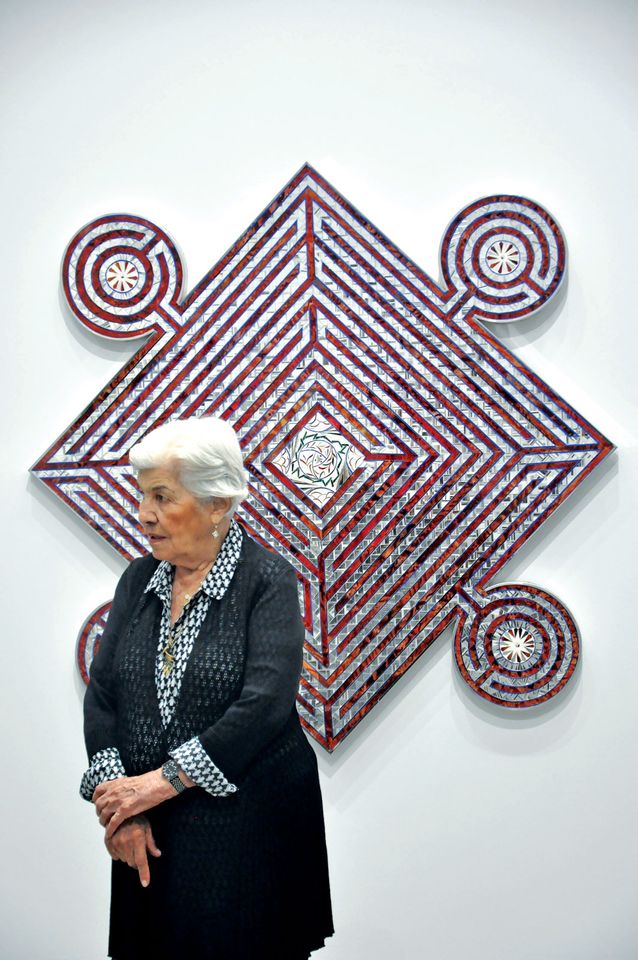 Farmanfarmaian finds inspiration in Iran's mosques and palaces Courtesy of the artist and The Third Line, Dubai

The 93-year-old doyenne of Iranian art, Monir Shahroudy Farmanfarmaian, has donated more than 50 of her works to a new museum dedicated to her oeuvre in Tehran. The Monir Museum, which opens tomorrow (15 December) in a 19th-century former palace and gardens, is the first institution in Iran devoted to a single female artist.

“I can leave this country with a representation of my life’s work,” Farmanfarmaian tells The Art Newspaper. “My love for my culture is in everything I create.”

The artist, who was born in the ancient Persian capital of Qazvin in 1924, returned to Iran in 2004 after spending much of her career abroad, including a long period of exile after the Islamic Revolution. Despite recent bouts of illness, she is still producing works in her Tehran studio with the aid of several assistants.

Farmanfarmaian’s signature mosaic pieces made from mirrored glass are rooted in the traditional decorations of Iran’s mosques and palaces. They have helped to make her one of the country’s biggest artistic names at home and abroad. Much of her own Iranian art collection was confiscated after the fall of the Shah in 1979.

The Monir Museum operates under the auspices of the University of Tehran and is housed in Negarestan Garden, a Qajar-era palace complex that became a museum of culture and later closed. The interior has been redesigned by the Iranian architect Reza Najafian.

“It is an honour for Monir to be recognised in her country of origin with the establishment of this new institution,” says a spokeswoman for The Third Line gallery, which represents the artist in Dubai. “It is unprecedented in Iran.”

Farmanfarmaian has given the museum more than 50 works from her personal collection, spanning six decades of her career, through a vakif, a charitable endowment under Islamic law. These include the Heartache series, sculptural boxes with collages of photographs, prints and objects that celebrate life with her husband Abolbashar Farmanfarmaian, who died of leukaemia in 1991. He was descended from an old Iranian family that was influential before the Islamic Revolution, which may explain why the museum is using only her first name, The Art Newspaper has learned.

The museum is also showing the Nonagon works of mirror and reverse-glass painting on plaster and wood, which were presented in Farmanfarmaian’s first US retrospective, organised by New York’s Solomon R. Guggenheim Museum in 2015. The exhibition came 70 years after she arrived in the US to study at Cornell University and the Parsons School of Design. She worked as an illustrator for Vogue, and socialised with artists including Andy Warhol and Willem de Kooning.

Farmanfarmaian found her artistic trademark while visiting the Shah Cheragh mosque in Shiraz during a trip home in the 1970s, when travel between Iran and the US was still straightforward. The pilgrimage site is famous for its glittering mirrored interior.

“Her significance is as someone who paid homage to the craftsmanship and the architecture of Iran, [who] took something that was always incorporated into walls and made it transportable,” says the curator Rose Issa, who has represented Farmanfarmaian in London. Her work has, in turn, spawned many artistic imitators in the country, Issa says.