To be or not to Bbay: Will Banksy take control of his market with 'approved used dealership'? 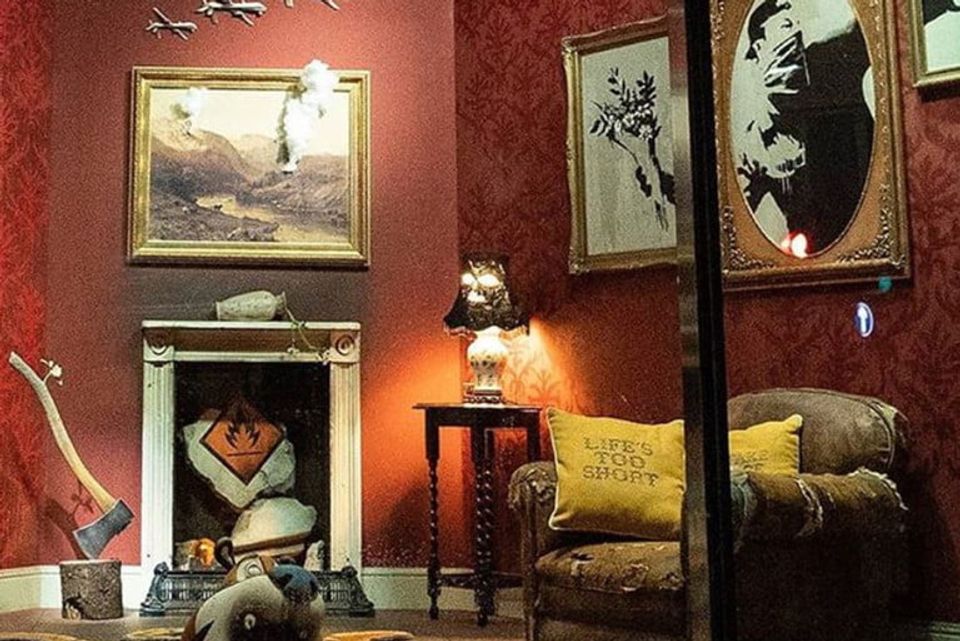 After two weeks as a window display in a former carpet shop in Croydon, south London, Banksy has launched his online merchandise store, Gross Domestic Product. Prices start at £10 for an old can of spray paint rising to £850 for a “John Bull” stab vest “as worn by Stormzy at Glastonbury festival (because it’s very dangerous there)”. A Girl With Balloon t-shirt with a shredded bottom half, a nod to last year’s prank at Sotheby’s, is priced at £30.

There is a collaboration with the Spanish artist Escif in the form of a resin axe (£750) and a partnership with the social enterprise Love Welcomes consisting of welcome mats stitched by refugee women out of salvaged life vests (£500 each; proceeds go to the women). A new triptych version of Banksy’s Flower Thrower is available for £750 (edition of 100).

Alongside new works, all made in the studio, Banksy also hints he could be moving into secondary market territory with Bbay, “the approved used Banksy dealership”. A tab at the bottom of his shop website simply says the dealership is coming soon. “Your first choice destination to trade in second-hand work by a third-rate artist” is the tagline beneath a photograph of a man standing by a Transit van surrounded by Banksy paintings and car boot offerings such as a fake fur coat and chintzy ceramics.

All very funny, and possibly just a ruse, but the secondary market has been a real point of contention for Banksy, even inspiring him to infiltrate Sotheby’s last October and remotely shred one of his own canvases live at auction. With no gallery there has been limited control over who acquires his works, something he now seems to be addressing.

Banksy has asked “wealthy collectors” to refrain from registering as the store's first consignment has been priced “far below market value”. Speculators and investors are also warned off. According to the terms and conditions, GDP can refuse an order “if an item is offered for sale on the secondary market before receipt, or if GDP reasonably believes that it might be offered for sale before or after receipt”. Pest Control has also placed a two-year restriction on issuing certificates of authenticity and separate sales agreements may even be applied. Whether they are enforceable is another matter.

There’s an application process to buy from the store—prospective customers must answer the question “does art matter?”—and purchases are currently limited to one per person. Responses will be judged by the comedian Adam Bloom.

It was a legal dispute over Banksy’s trademark that prompted the launch of the store, according to the artist, who said a greeting card company called Full Colour Black was contesting his rights to his own name and imagery, “so they can legally use it to sell their fake Banksy merchandise”.

Mark Stephens, the DACS chairman and media lawyer who was advising Banksy during the legal row, described it as “frankly ludicrous litigation”, but noted: “The law clearly states that if the trademark holder is not using the mark then it should be handed to someone who will.” His solution? Create a merchandise range and open a shop.

Having once claimed that copyright is for losers, Banksy is keen to make clear on his new website that he “continues to encourage the copying, borrowing and uncredited use of his imagery for amusement, activism and education purposes”. However: “Selling reproductions, creating your own line of merchandise and fraudulently misrepresenting knock off Banksy products as ‘official’ is illegal, obviously a bit wrong and may result in legal action.”

Full Colour Black hit back at the allegations in a statement saying the “tiny business” of three does not “infringe his rights in any way”. It adds: “We don’t use his trademarks or his brand name. We make cards that feature Banksy’s public graffiti. It’s a legitimate enterprise.”

The card company says it has written to Banksy, his team and his lawyers “many times since 2010 to say that we want to pay royalties to him” but that he “doesn’t want it”.

It continues: “We make cards because Banksy never makes anything available to his fans. We all love his graffiti. He doesn’t want you to have it and he’s hoping to trick you into thinking that we’re hurting his business. We’re not.”

With Banksy's 2009 chimp painting Devolved Parliament selling for an eye-wateringly inaccessible £9.9m at Sotheby’s earlier this month, it is perhaps unsurprising he is trying to restrict his secondary market while at the same time making his work affordable for lower income fans. His authenticating service Pest Control is “the sole point of sale for new work by Banksy”, but this new online venture could shake up the market yet again.