Roberto Alvim, a former theatre director, is a die-hard supporter of the far-right president Jair Bolsonaro 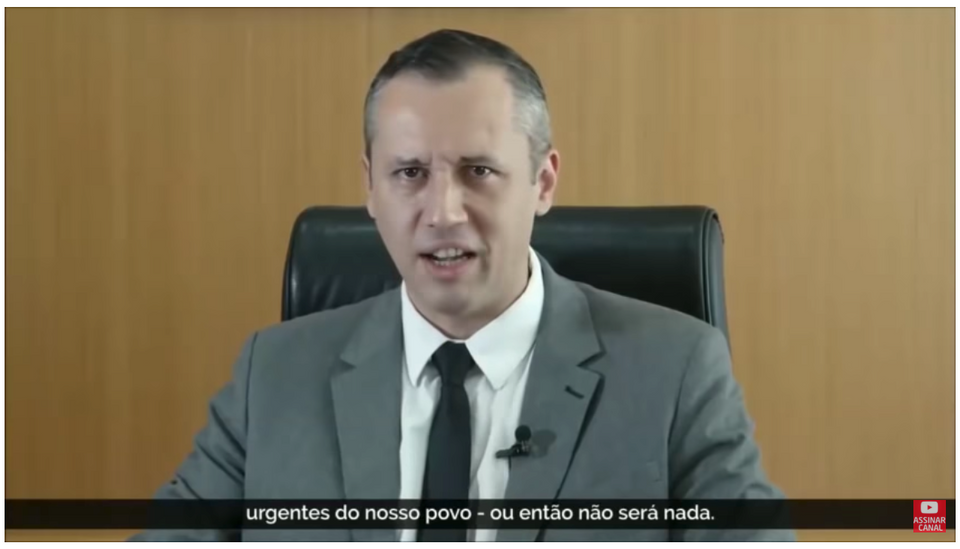 A still from the video posted on the culture ministry's official Twitter account, in which Roberto Alvim echoes the words of Joseph Goebbels

The Brazilian culture secretary Roberto Alvim has been fired after posting a video on the ministry's official Twitter account where he appears to paraphrase the Nazi propaganda minister Joseph Goebbels. Alvim is a former theatre director who was given the federal role in June last year after he claimed he was persecuted for supporting the country's far-right president Jair Bolsonaro.

“Brazilian art in the next decade will be heroic and national,” Alvim says in the video, which was intended to promote a national arts prize. “It will be endowed with a great capacity for emotional involvement and will be equally imperative, since it is deeply linked to the urgent aspirations of our people, or else it will be nothing.”

In a biography of Goebbels by Peter Longerich, the Nazi politician is quoted as proclaiming: “The German art of the coming decades will be heroic, will be steerily romantic, will be unsentimentally objective, will be nationalist with grand pathos, it will be both committed and unifying—or it will be nothing.”

Alvim at first claimed in a Facebook post that his statement’s similarity to Goebbels was a “rhetorical coincidence”. His announcement, however, featured background music from Richard Wagner’s opera Lohengrin, which Adolf Hitler said in his first volume of Mein Kampf had a defining impact on him. Alvim later said in a radio interview that Goebbels’s words were chosen by his aides after he asked them to search Google for speeches about “nationalism and art”.

The video met with widespread public condemnation from other members of the government, including the Brazilian Speaker of the House and the president of the Supreme Court. In a statement announcing Alvim's dismissal today, Bolsonaro described the video as "unfortunate" and said that his administration rejects “totalitarian and genocidal ideologies, like Nazism and communism, as well as any allusion to it”. The president also expressed “our total and unrestricted support of the Jewish community”.

The 20m reais prize promoted in the video is meant to fund art, theatre, opera and music with conservative themes prioritised. During his short tenure, Alvim, who became a born-again Christian after recovering from a health scare related to a benign tumor, has been criticised for pushing a conservative agenda and cutting funding to certain arts, film and television projects that deal with LGBTQ+ themes and other topics that he has deemed “Satanic”.