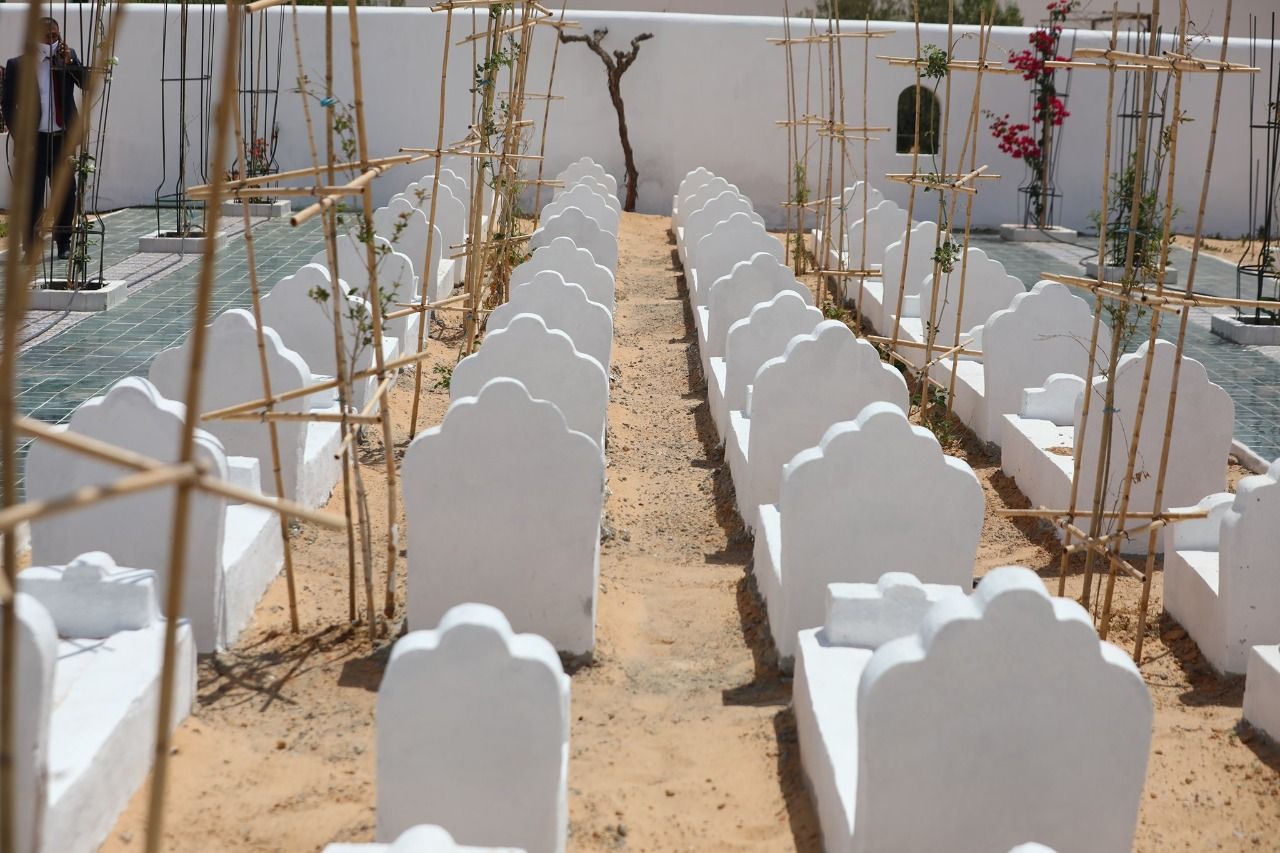 Le Jardin d’Afrique in Zarzis, Tunisia, is partly intended as a rebuke of global authorities that seem indifferent to migrant deaths Courtesy of Rachid Koraïchi

The project is partly intended as a rebuke of global authorities that Koraichi believes are indifferent to migrant deaths. It was inaugurated at a time when more than 800 have died crossing Mediterranean so far this year—compared with 350 a year ago—according to IOM, a Geneva-based UN agency.

During the ceremony in Zarzis, Tunisia, a rabbi, imam and the archbishop of Tunis were among those who strolled across tiled paving bordered with thickets of perfumed plants. Azoulay presented a small metal sculpture entitled The Tree of Peace that has been installed in the garden.

But the absence of African ambassadors at the ceremony typified a widespread lack of concern about migrant deaths, Koraichi tells The Art Newspaper. “They are meant to be in charge but take no responsibility for these tragic losses,” the artist says. 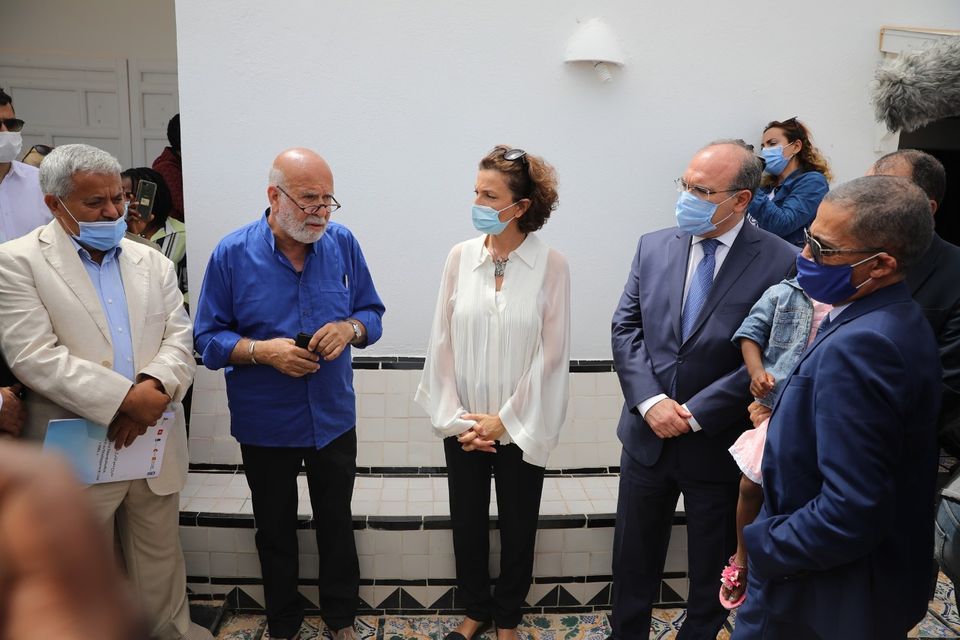 The opening ceremony attended by Audrey Azoulay, the director-general of Unesco, pictured here with the artist Courtesy of Rachid Koraichi

The site will allow migrants, many of whom are not immediately identifiable, to receive a dignified burial, Koraichi says. A “beautiful carpet” of decorated tiles leads to an interfaith chapel, a morgue for sixteen bodies and 200 graves in which multiple corpses can be stacked. Many already contain bodies rejected by overburdened local public cemeteries.

Staff will obtain a DNA code in an online forensics lab prior to burial. This will be engraved on each migrant’s gravestone, together with the victim’s sex and descriptions of the clothes he or she was wearing when discovered, in the hope it will allow for future identification.

The self-funded project was born after Aicha Koraichi, the artist’s daughter, read on social media about bodies washed up on Zarzis’s shores. Rachid and Aicha Koraichi visited the town in December 2018, and were appalled by what they saw. 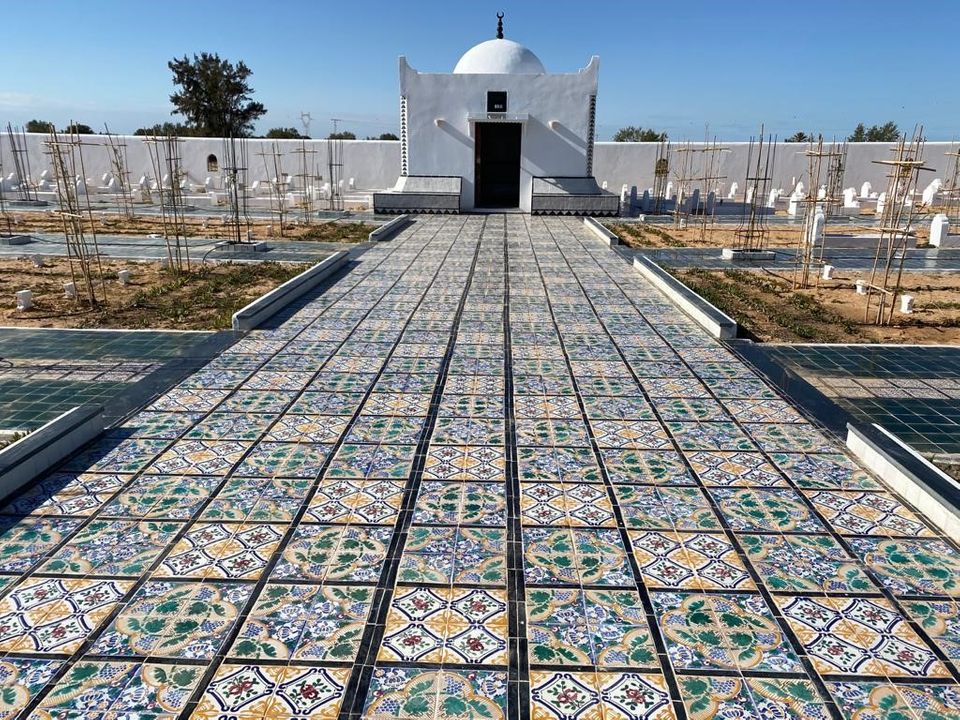 “There were mountains of corpses along a very long beach,” Koraichi says. “Bodies are carried there by ocean currents and they were collected by rubbish lorries and deposited on tips infested with dogs and rats.”

The artist bought a 2,500m sq. plot of land and assembled a team to build the site in his absence, returning every six months to check on progress. Workers raised the ground level with sand in order to dig deep graves without hitting the water table. Even after the graves are full, the site will remain an enduring beacon of humanity in the face of suffering, Koraichi says. 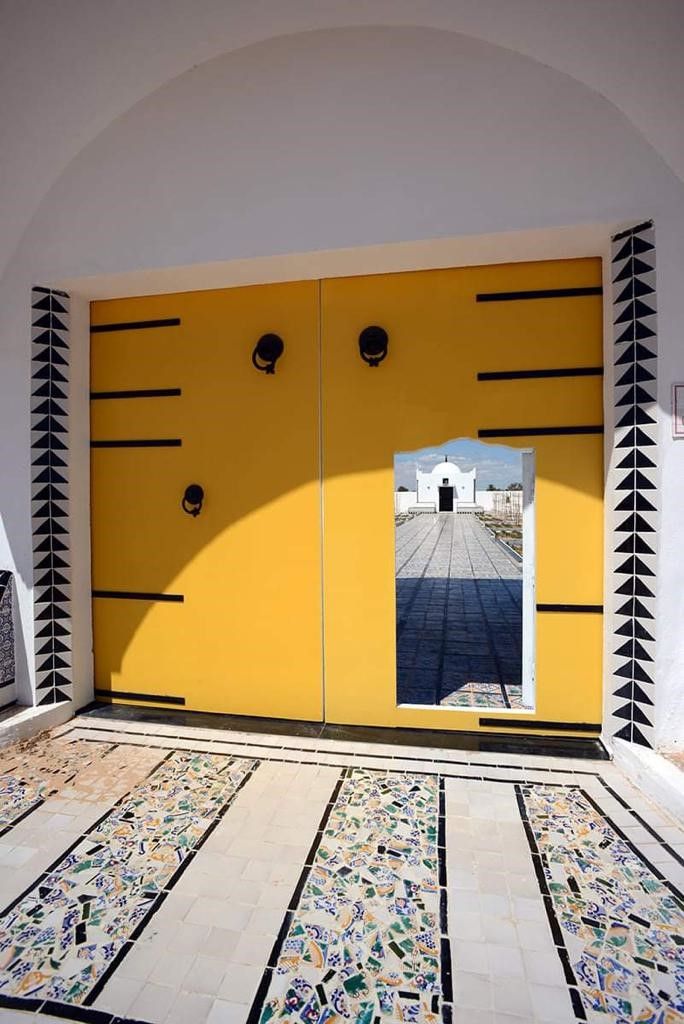 The memorial's yellow gate represents the sun, according to the artist Courtesy of Rachid Koraichi

The artist says he has tried to create a "paradise", which is accessed via an imposing yellow gate representing the blazing sun in the white of a barren desert. Visitors must stoop as they enter through a low door in a gesture of deference to the dead.

Within, five olives represent the five pillars of Islam, and 12 vines the 12 apostles of Christ. Bitter oranges used for marmalade suggest the harshness of death and the sweetness of the afterlife, while pomegranates, with their many seeds, signify society. Persian jasmine, deep red bougainvilleas and night blooming cacti sweeten the air.

The artist—whose sculptures, prints and ceramics have been exhibited at the Venice Biennale and New York's Museum of Modern Art—is reluctant to reveal how much the project cost. “Building this site is like offering a gift to a loved one,” he says. “It is not the price that matters, it is how much you want to offer the gift.”