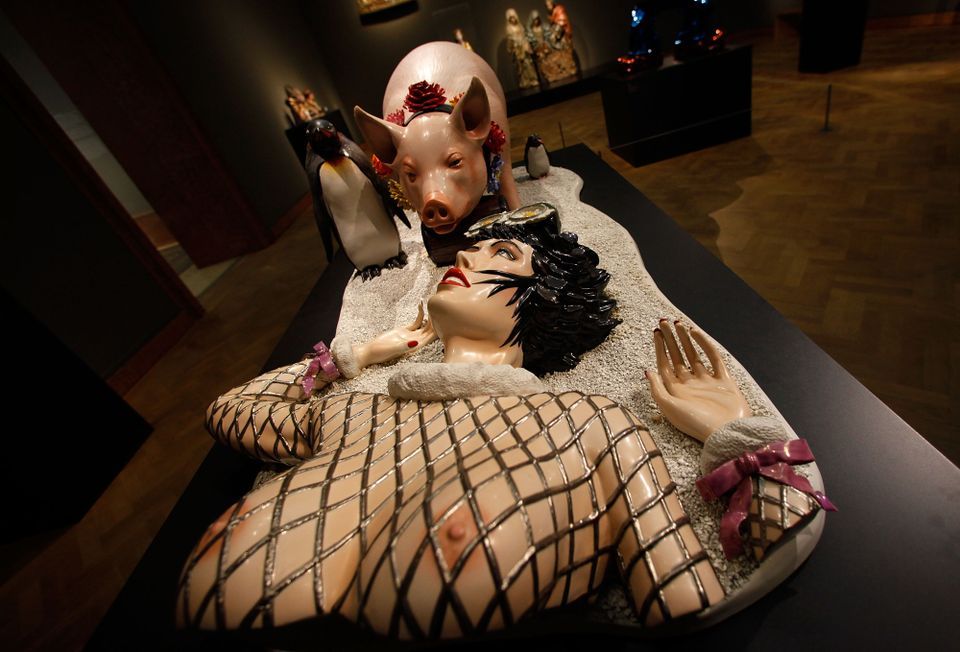 Fait D'Hiver (1988) by Jeff Koons, on show at the Liebighaus museum on in Frankfurt in 2012 © Ralph Orlowski/Getty Images

Jeff Koons has been found guilty of plagiarising a 1980s advertising campaign for French fashion brand Naf Naf to make his porcelain sculpture Fait d'Hiver (1988), which is part of his Banality series.

The high court of Paris has ordered the artist’s company Jeff Koons LLC, and the Centre Pompidou, which exhibited the piece in a 2014 Koons exhibition, to pay Franck Davidovici, the creative director of Naf Naf, €135,000 in damages and interest, and €70,000 in trial costs.

The court ruled that Jeff Koons LLC had counterfeited a 1985 Naf Naf advert, featuring a pig with a barrel of rum tied round its neck rescuing a girl in the snow, by using its “original elements”. Davidovici had sued for copyright infringement, with his lawyer, Jean Aittouares of Ox Avocats, describing the Koons sculpture as a “slavish copy” of the advert.

“The court dismisses the argument of freedom of artistic expression, considering that Koons had clearly sought, by retaking the first work, to make 'the economy of a creative work',” Ox Avocats posted in a short online statement.

The court also ordered Koons' company to pay €11,000 to Davidovici for reproducing an image of the sculpture on Koons' website, and €2,000 to Flammarion, the French publishing house, for reproducing an image of the work in the Centre Pompidou's exhibition catalogue. However, the court did not order the seizure of the sculpture, which was acquired by the Prada Foundation for around $3.7m at Christie’s New York in 2007, as demanded by Davidovici.

Alain Seban, the president of the Centre Pompidou when Koons had his exhibition, had defended Koons when Davidovici's complaint was brought. “The very principle of [his Banality sculpture series] is to draw on objects bought in shops or images seen in the press,” he said.

Last year, the Paris high court ordered Koons' company and the Centre Pompidou to pay €40,000 to the heirs of the late French photographer Jean-François Bauret, ruling that his Nus sculpture had plagiarised a 1975 picture taken by Bauret. The sculpture was not shown in the Centre Pompidou exhibition after it was damaged during transportation.

The latest ruling comes one month after the Paris town hall announced that Koons' monumental sculpture, Bouquet de Tulipes, would be installed on the lawn of the Petit Palais near the Champs-Elysées after months of wrangling. Koons had wanted it installed next to the Palais de Tokyo and the Musée d'Art Moderne de la Ville de Paris but, following a public outcry, a different venue was agreed on.

The Centre Pompidou did not respond to a request for comment.