Hirst is a fan and friend of the late abstract painter

The British abstract painter John Hoyland may seem like a surprising choice for the inaugural exhibition at Damien Hirst’s long-awaited Newport Street Gallery. Hirst has spent around £25m and more than a decade developing the 37,000 sq. ft complex in Vauxhall, south London, into a free public gallery for his 3,000-piece personal collection, known as Murderme. He could have used the opening to show its breadth, from natural history curiosities to works by Modern and contemporary artists whose names are as famous as Hirst’s own: Jeff Koons, Sarah Lucas, Tracey Emin, Francis Bacon and Picasso.

According to a spokeswoman for the gallery, however, Hirst planned to dedicate a solo show to Hoyland from the beginning. The two artists (and Yorkshiremen—Hoyland from Sheffield, Hirst from Leeds) first met in 1992. They hit it off again in 2009, two years before Hoyland’s death, when they met for a conversation that was published in the RA Magazine and the catalogue for No Love Lost, the exhibition at the Wallace Collection that was billed as Hirst’s return to painting.

Hirst’s subsequent offer to buy works from what Hoyland called the “Aladdin’s cave” of his Wiltshire studio trumped other interested collectors, says Hoyland’s widow, Beverley Heath-Hoyland. The ambition of Hirst’s private museum promised to match the scale of Hoyland’s early paintings. “John was quite canny. He hid them; he didn’t want them to disappear without a trace. He wanted them to go into important collections and he wanted them to be seen by the public,” Heath-Hoyland says. 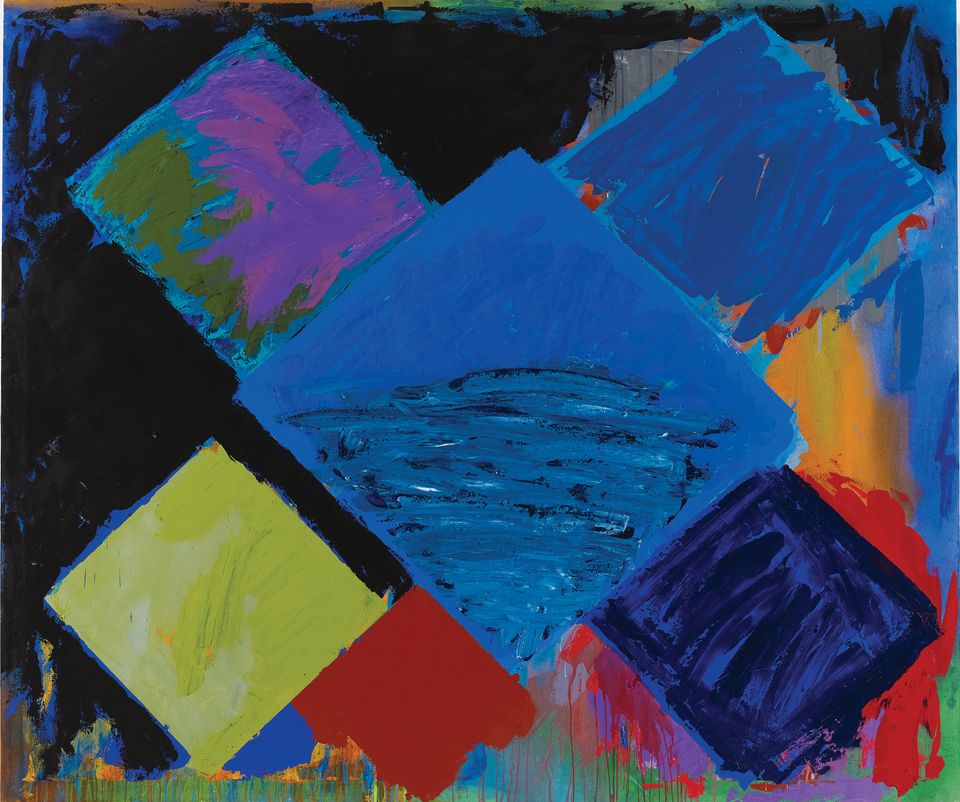 Thirty-three of Hirst’s acquisitions now fill the white, label-free walls of Newport Street’s six galleries. Hirst has said that he wanted to emulate the longer-term installations of the Saatchi Gallery in Boundary Road, north London, where his shark in formaldehyde was shown in the early 1990s (none of Hirst’s own works will appear at Newport Street). The title of the exhibition, Power Stations, is his invention, a tribute to Hoyland’s blazing palette and outsized canvases.

Hirst organised the loosely chronological hang with Hugh Allan, who runs Other Criteria, Hirst’s publishing and merchandising company. The show is less a retrospective than a “marvellous representation of work in a strong period”, says the critic Mel Gooding. The paintings—almost all acrylic—date from 1964, when Hoyland was influenced by the stark forms and flat, bright colours of the “new generation” in post-war British sculpture, led by Anthony Caro. Many of the works in the lower galleries featured in Hoyland’s first solo museum exhibition at the Whitechapel Gallery in 1967.

Up the Caruso St John-designed spiral staircases, the disciplined geometries suddenly give way to splotchy, textured flesh tones, reflecting Hoyland’s break from the long shadow of New York abstraction in the 1970s. He preferred the term “non-figurative” to “abstract” to describe the intuitive, experimental nature of his work. The final room is dedicated to the high-energy works made around 1980, when allusions to the natural world, inspired by Hoyland’s extensive travels to Asia and the Caribbean, began to creep in.

As Hoyland’s estate compiles a catalogue raisonné of paintings for digital publication with Artifex Press, it remains to be seen whether Hirst’s homage will reawaken interest in the artist’s later career. “In my view, there were 30 more years in which he seemed to be at the height of his powers,” Gooding says.