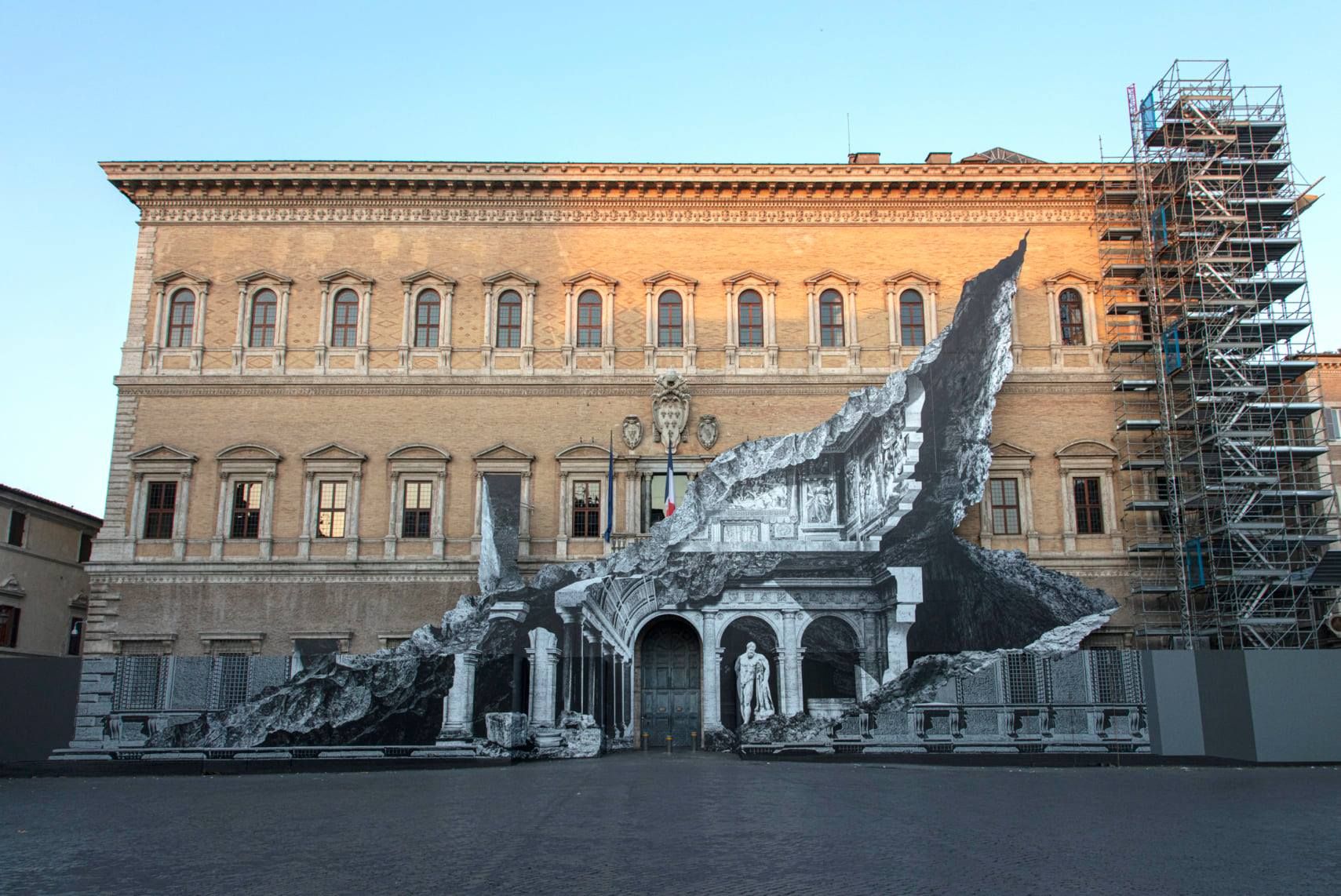 JR's installation disguises scaffolding across the front of the Palazzo which is undergoing a four-year restoration costing €5.6m Courtesy of the French Embassy in Rome

The French street artist JR is stopping traffic once again in Italy with his latest dramatic trompe l’oeil illusion piece which adorns the façade of the Palazzo Farnese, home to the French embassy in central Rome. The piece, entitled Punto di Fuga (Vanishing Point), gives passers-by a peep into the palace while it undergoes renovation, offering glimpses of the classic colonnade and vestibule within, designed by the Renaissance architect Antonio da Sangallo.

The X-ray work of art also shows elements from the palace’s past such as a monumental statue of Hercules that has since been removed. JR told Agence France-Presse that “the palace is not open to everyone… there are rooms and areas that can’t be seen. This is one way of opening up the building. It reveals [original] frescoes and arches that no longer exist.”

The installation disguises scaffolding across the front of the Palazzo, which is undergoing a four-year restoration costing €5.6m. As part of the overhaul, the French Embassy has launched an ambitious contemporary art programme inspired by the historic venue, which has been leased by the French government since 1936. Last month, the French artist Olivier Grossetête unveiled a major public art piece as part of the new initiative, suspending a 60-foot cardboard bridge in the air over the River Tiber.

The bridge was modelled on an incomplete project by Michelangelo, acting as a symbolic connection between the Palazzo Farnese and the gardens of the Villa Farnesina on the opposite bank. “The dream of Michelangelo and Cardinal Farnese [founder of the Roman palace] has been realised, with an ephemeral work so suggestive and poetic that it is now forever imprinted in the collective imagination,” says the French embassy in a statement.

But the work proved to be more ephemeral than the organisers imagined after bad weather forced Grossetête to dismantle the piece on 15 July, three days before the scheduled deinstallation.

“We gave a big push. Because I think that the Farnese Bridge and this one [JR] are the two biggest projects so far of this kind, in Rome in this period,” Christian Masset, France’s ambassador to Italy, told The New York Times, referring to the French government’s contemporary art drive in the capital. The embassy declined to comment on future art projects.

Earlier this year JR unveiled another dramatic work, La Ferita (The Wound), on the façade of the Palazzo Strozzi in Florence, creating an illusory 28m-tall crack in the building that appeared to split the gallery in half. Italian commentators are debating the merits of both on social media, with one contributor saying that the Rome work is “even more spectacular than the Strozzi piece”.