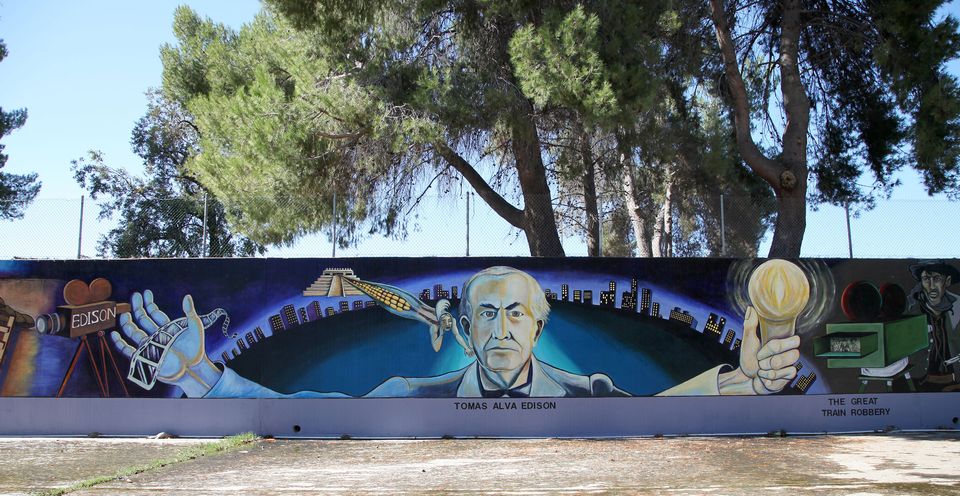 Even Thomas Edison, in Baca's vision, is Mexican Courtesy of SPARC Archives sparcinla.org

Over a series of blistering summers in the 1970s and 80s, the Los Angeles artist Judy Baca worked with hundreds of teenagers to create the half-mile long mural known as The Great Wall, which offers a vivid version of California history rich with immigrants and low on white male hero worship. In 2011, Baca completed a restoration of the project. But she is not done, the 70-year-old artist told a crowd of reporters on Tuesday gathered at the Tujunga Wash, a tributary of the Los Angeles River, during the opening week of Pacific Standard Time: LA/LA.

Next up, Baca said, will be hundreds of feet of new scenery. The mural currently ends in the 1950s, with images of Wilma Rudolph, the black female athlete who overcame poverty and childhood paralysis to win Olympic gold in track events and Billy Mills, the Native American athlete whose story is just as inspirational. An artist who bridges the Chicana art movement and feminism, Baca revealed that she plans to start the next section with an image of radical protest from the 1960s.

The Olympic torch that Mills holds? It will, Baca said, fall into a circle that represents a generation on fire. "These semi-hippie, but not entirely hippie, my-generation people have fire in their chests and they are met by the Alabama hoses and the dogs, and yet they are people in total peace and calm recognising they must stand for what they believe in,” she said. “We're hoping this is going to be an inspiration for the next generation." 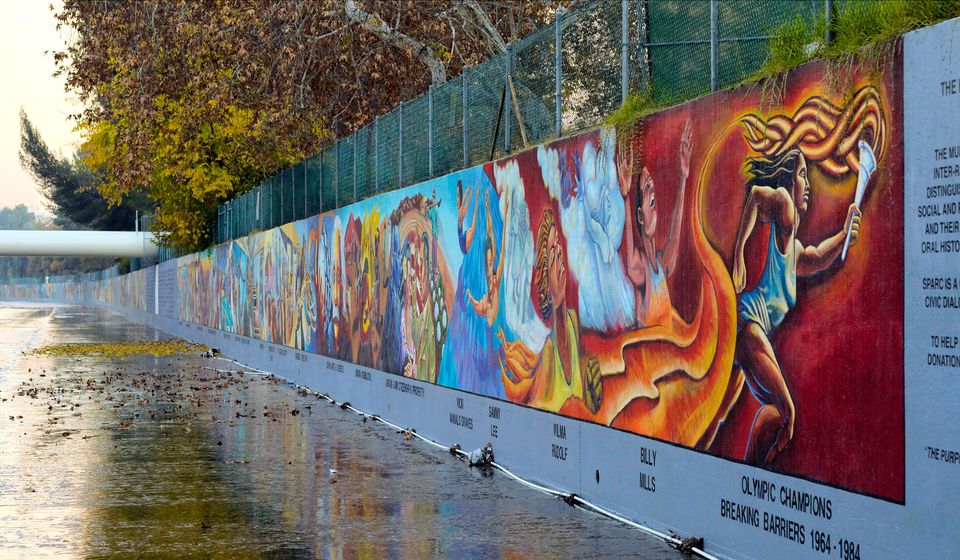 But first, Baca has to figure out logistics. This time, she says, she does not want her teenage assistants, many of whom came straight from the juvenile justice system, working outdoors at the site of the mural in the Tujunga Wash. “We stopped painting in 1984 because we had a flash flood that took away one of my people and nearly killed my team,” she explained. Now she is looking for a proper studio with air-conditioning. “Running water and a toilet would be nice,” she added.

The plan is to paint the mural indoors on a substrate and then transfer this material to the Great Wall. The UCLA doctoral student Carlos Rogel describes it as an ancient Renaissance technique called miraflage that would allow the artist to use fabric panels up to 400 feet long that match the existing walls.

Rogel is also a project manager at SPARC, the nonprofit organisation that was founded to handle money for Baca’s work and has since become the city’s leading resource for mural preservation. The group is starting to raise money for the next phase of the mural.

In the meantime, Padilla said they have just raised nearly $1.5m for a new pedestrian bridge, to be erected in 2018, that will allow better access to the mural. Kulapat Yantrasast, the go-to Los Angeles architect who transformed the Masonic Temple on Wilshire Boulevard into the Marciano Foundation, is building the bridge out of concrete, rammed earth and recycled debris from the river.

‘The pedestrian bridge will solidify what was always the intention of the mural, to make the relationship between social justice and environmental justice clear,” Baca said.

“I grew up by the Los Angeles River, and I saw it turned to concrete… it’s very personal to me,” she added. “I painted this because I couldn’t blow it up. I didn’t want to go to prison.”