“It’s a 1913 Kandinsky,” said a shaky Hugo Nathan by way of explanation on why he bid a record £29.2m (£33m with fees) on Wassily Kandinsky’s Bild mit weissen Linien at Sotheby’s Impressionist and Modern Art sale on 22 June in London.

Nathan, of the London-based art advisory Beaumont Nathan, said he bought the oil on canvas on behalf of “a private collector”. The work, an early foray into abstraction by the artist, carried an estimate of in excess of $35m, and was subject to both a guarantee and an irrevocable bid. Nathan’s winning bid, against Patti Wong, chairman of Sotheby’s Asia, was met with applause by an audience glad to see a major work sell in the room for once and relieved the sale might finally move onto the next lot.

The standing record for Kandinsky was, in fact, minutes old, set just six lots earlier by Murnau—Landschaft mit grünem Haus, a landscape from 1909 before the artist fully turned to abstraction. Pitched at £15m to 25m, it sold on the phone at £18.5m (£20.9m with fees), beating the previous high of $23.3m/£18.7m for the artist, set at Christie’s New York in November 2016. 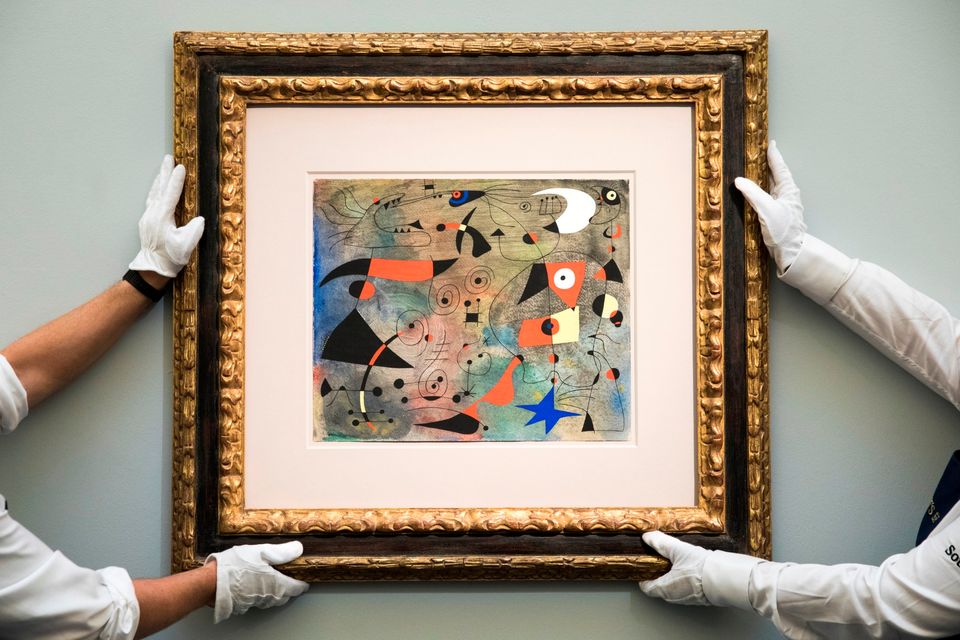 “Just as well it’s the longest evening of the year,” later quipped auctioneer Helena Newman, the global co-head of Sotheby’s Impressionist and Modern Art Department and chairman of Sotheby’s Europe, during the lengthy bidding for Alberto Giacometti’s Grande figure (1947), eventually sold over the phone with Sotheby’s Simon Stock for £15.8m (£17.9m with fees).

This evening’s sale was one of two halves, jointly totalling £129m (£148.9m including fees), just shy of the lower pre-sale estimate of £129.9m-£170.5m. If taken together, tonight narrowly exceeded Sotheby’s New York Impressionist and Modern evening sale in May, which totalled $173.8m/£137.9m with fees.

The first part of the sale was Actual Size, an appealing selection of 35 small works curated by Sotheby’s Thomas Bompard. This met with a mixed reaction, with 66% sold by lot for a total of £17.4m (£21m with fees), falling short of the estimated £19.3m-£27.9m. It was generally the lower value pieces (in the lower- to mid-six figures) that failed to find buyers; some felt a little like padding. Ironically for an Impressionist and Modern art evening, though well deserved, the top lot of Actual Size was an Old Master painting—a meticulously painted still-life of flowers by Dutch painter Ambrosius Bosschaert the Elder (1573-1621). This sold on the phone to Wong, bidding on behalf of an Asian private collector, for a mid-estimate £2.5m (£2.97m with fees).

The ensuing main body of the auction was in fact smaller, at 23 lots, but amounted to £112m (£127.9m with fees), with 74% sold by lot. Although only scraping the £110.6m-142.6m estimate, this represented a 24% increase on the equivalent London sale last June, which totalled £103.3m with fees. Led by the aforementioned Kandinsky’s Bild mit weissen Linien, this was the first time Sotheby’s has sold three works for over £20m (once fees are added) in one Impressionist and Modern sale in London. The runner up work was Joan Miró’s lyrical Femme et oiseaux (1940), the eighth of his series of 23 Constellations works. Carrying an estimate of in excess of $30m, it sold on the phone for £21.7m (£24.6m with fees).

Speaking after the sale, Newman said she thought such “lively and lengthy bidding” painted a “compelling picture” following Art Basel. “To have three landmarks in the development of 20th Century art by Kandinsky, Miró and Giacometti come to the market in a single sale tonight was momentous,” said Newman, adding “Collectors were out in force, participating from a record number of locations around the globe, with the level of Asian buyers as numerous as those from the US.”