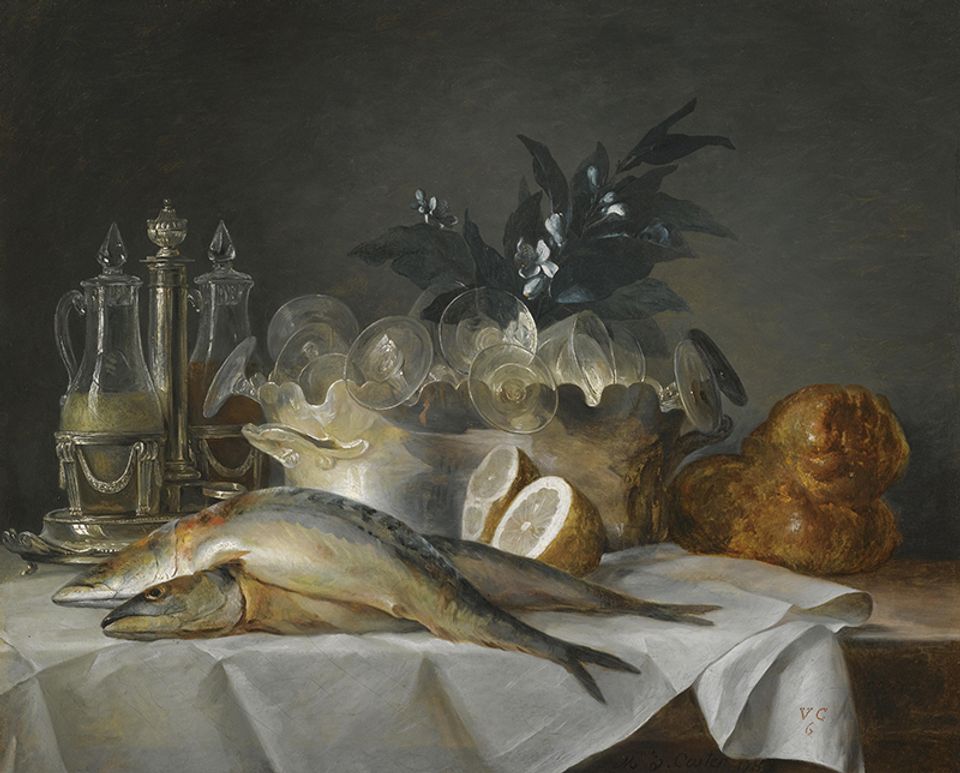 In anticipation of International Women’s Day tomorrow—and as part of a wider trend of museums adding more female artists across all periods to their collections—the Kimbell Art Museum in Fort Worth, Texas has announced a triumphant recent acquisition: Still Life With Mackerel (1787) by Anne Vallayer-Coster (1744-1818). One of most original masterpieces of 18th-century French still-life painting, it beautifully complements the Kimbell’s great self-portrait of Vallayer-Coster’s peer Élisabeth Vigée Le Brun, both artists much favoured by Marie-Antoinette, and will go on view tomorrow. The museum purchased the painting for an undisclosed sum last October at TEFAF New York Fall, as a gift from Sid R. Bass in honour of Kay and Ben Fortson, long-time leaders of the Kimbell Art Foundation’s board of directors.

Vallayer-Coster, considered the second-greatest French still-life painter of the 18th century after Jean-Baptiste-Siméon Chardin, was most celebrated for her depictions of flowers, and fine examples of her virtuosity in this genre can be seen in US collections in the Dallas Museum of Art and the Metropolitan Museum of Art, which has a small oval picture. Her greatest works, however, are mostly flora-free compositions, which display a wonderful freshness and invention in subject and composition.

The Kimbell’s new painting, a table-top tableau of subtle opulence, is a unique piece in Vallayer-Coster’s oeuvre. It centres on a party of upturned glasses cooling in a silver verrière, accompanied by crystal oil-and-vinegar cruets in a neoclassical silver stand, a delectable orange-flower-water brioche, a half-lemon and two gleaming mackerel ready for the cook. Painted in a restrained palette predominated by cream and grey, with a refined yet assured brush, it is a tour-de-force in the rendering of transparent and reflective objects, designed to dazzle. The artist signed the work in red stitching on a linen napkin—perhaps a proud, pointed declaration that her talents were not confined to flowers.

“Mlle [Mademoiselle] Vallayer astonishes us as much as she enchants us … no one of the French school can rival the strength of [her] colours … nor her uncomplicated surface finish. She preserves the freshness of tone and a beautiful harmony throughout the canvas. What a success at this age!” This effusive praise by the Enlightenment philosopher and critic Denis Diderot, referring to an earlier painting made in 1771, can equally apply to this painting, exhibited by Vallayer-Coster at the Salon of 1787 and kept by the artist during her lifetime.

As pictures with prominent fish tend to put off unsophisticated collectors, Wildenstein & Co, who sold the painting to the museum, purchased it at Sotheby’s London in July 2011 for the relative bargain price of £145,250 ($233,213). (Though figure painting was not Vallayer-Coster’s strong point as a painter, her auction record to date is €903,000 at Sotheby’s Paris in 2015 for her 1773 work Portrait of a Violinist, bought by the Nationalmuseum in Stockholm.)