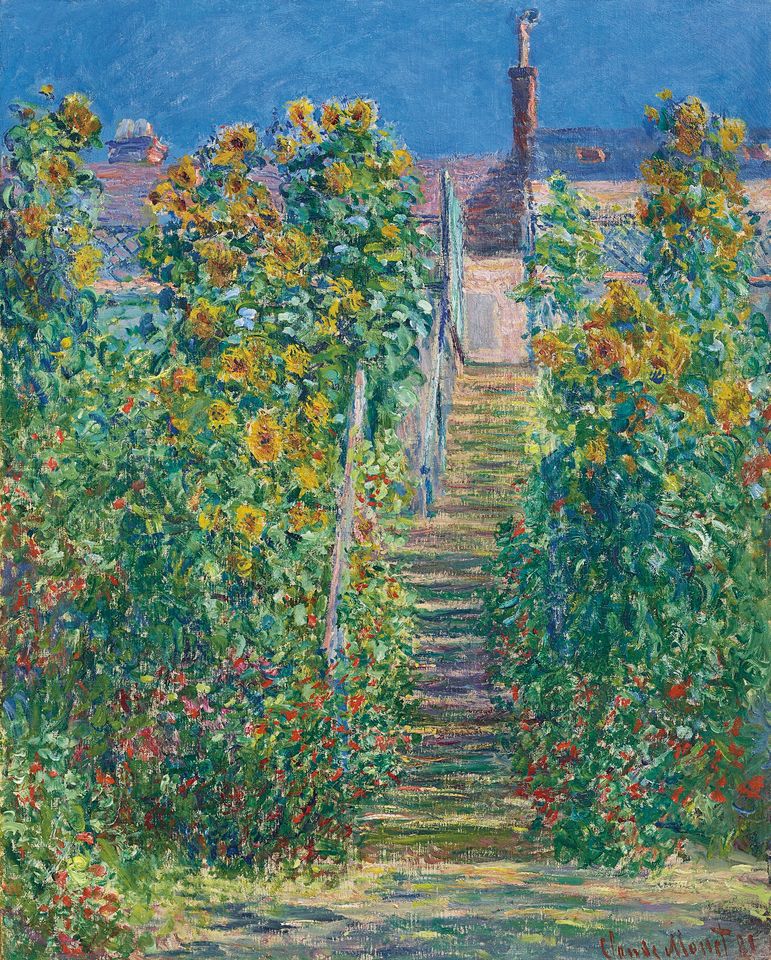 Claude Monet’s oil painting, L’escalier à Vétheuil (1881), is the top lot of the Impressionist and Modern evening sale in New York on 11 November. Courtesy of Christie's

In three forthcoming sales in both New York and London, Christie’s will offer 20 works from the collection of the late New York couple Herbert and Adele Klapper. The auction house predicts that the collection, which is being offered without guarantees, will bring in more than $50m.

The Brooklyn-born entrepreneur Herbert Klapper founded the Superior Sewing Machine and Supply Corporation in the late 1940s, a wholesale distributor of industrial sewing parts based in New York’s Garment District. The couple “started buying in the early 1980s and bought everything together, from classic to contemporary works—their collection spans centuries”, says Max Carter, the head of the Impressionist and Modern art department in New York.

Leading the auction house’s Impressionist and Modern evening sale in New York on 11 November is Claude Monet’s oil painting L’escalier à Vétheuil (1881) estimated at $12m-$18m. Once owned by Alexander Cassatt, the brother of Impressionist painter Mary Cassatt, it is the last in a series of four works to remain in private hands. In total, the evening is slated to feature 16 works from the Klapper collection. Femme Accoudée (1921), a pastel by Picasso valued between $10m and $15m as well as one of his last Neoclassical-inspired portraits from 1924, Buste de Femme au Voile Bleu, which has a high estimate of $12m, are some of best works of this decade in the artist's career to appear at auction in years, according to Carter. Additional highlights include Henri Toulouse Lautrec's Danseuse (est $6m-$8m) and a unique white marble sculpture by Jean Arp called Déméter (1961) estimated at $2m-$3m.

The American day sale on 20 November includes two landmark paintings by William Barnett from the artist’s celebrated series of portraits of family members. Barnett was “one of the first artists that caught their eye before the couple moved on to the European works”, says Carter. The oil paintings, Aurora (1977) and Circe (1978), range from $60,000 to $120,000.

In its Old Masters evening sale in London on 6 December, the auction house will offer an oil work by the Flemish artist Pieter Brueghel, the Younger, called The Netherlandish Proverbs and estimated at £3.5m-£5.5m. The work is of similar size and composition to the artist’s record-setting painting, The Battle between Carnival and Lent, which Christie’s sold in London in 2011 for £6.9m (est £3.5m-£5.5m). Another work from the Klapper’s collection, a still life by the Dutch artist Balthasar van der Ast, is estimated at £200,000-£300,000. Pieter Brueghel the Younger's The Netherlandish Proverbs has a high estimate of £5.5m and will highlight the Old Masters sale in London on 6 December. Courtesy of Christie's
More NewsTopicsAuctionsClaude MonetChristie'sAuction housesPieter BrughelNew York Auctions 2018