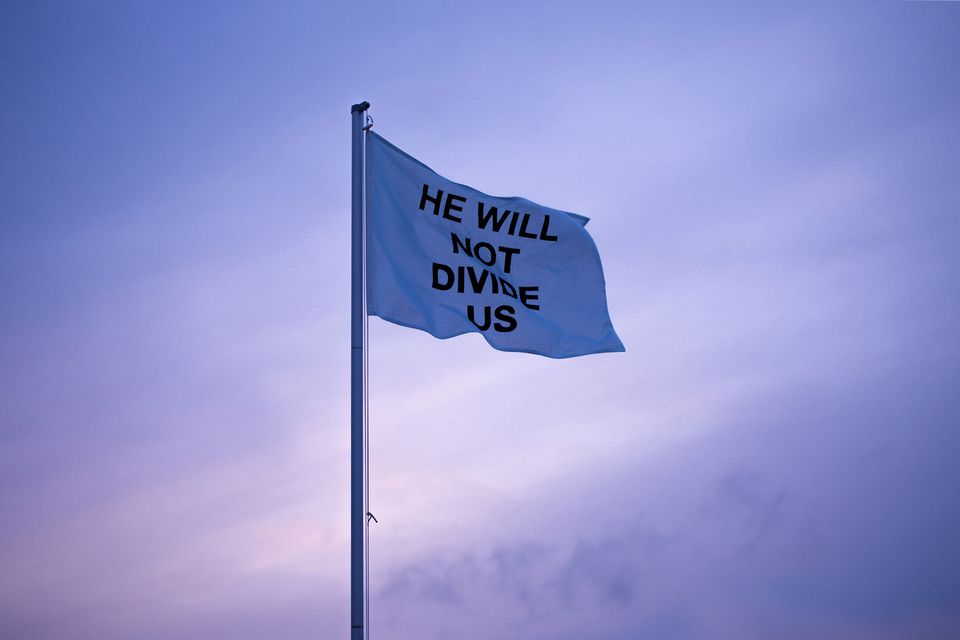 A flag emblazoned with “He Will Not Divide Us” will be live-streamed from the top of the landmark building’s tower in the centre of Nantes to www.hewillnotdivide.us for the remainder of the 45th Presidency of the United States LaBeouf, Rönkkö & Turner

He Will Not Divide Us, a protest against Donald Trump’s presidency by the artists Shia LaBeouf, Luke Turner and Nastja Säde Rönkkö, has found a home at Le Lieu Unique, an arts centre in Nantes. The artists have been forced to move the work on four previous occasions after it was attacked by neo-Nazis and vandals in locations in the US and UK.

A white flag featuring the words “He Will Not Divide Us” is now being live-streamed for the remainder of Trump’s presidency from a tower on top of the cultural centre in western France.

The durational performance began the day Trump was inaugurated. It was first installed at the Museum of the Moving Image in New York where visitors were invited to repeat the words “He will not divide us” into a live-stream camera mounted on a wall outside.

But the installation was subjected to “constant disruption and hate speech by far-right extremists, and a lack of institutional support”, the artists said in a statement. A month after it started, the project was moved to the El Rey Theater in Albuquerque where it was again targeted by far-right protesters.

The work was subsequently moved to an undisclosed location. There, the artists adapted the work to its present form, “with a flag flying in resistance to division and defiance of those that would wish to silence the work.” However, the violence against the work continued, and alt-right groups defaced it with anti-Semitic imagery.

“Due to these escalating threats against the artwork and those associated with the project, including threats of gun violence, the US was no longer deemed safe enough for the work to exist,” the artists said.

In March, the project was installed at FACT (the Foundation for Art and Creative Technology) in Liverpool. But, within 24 hours, a group of men thought to be members of /pol/, the political discussion board of the anonymous message-board 4chan, scaled the roof of the building in an attempt to vandalise the work, and the organisation removed the installation. The gallery released a statement on Twitter saying that the installation had been shut down on police advice due to “dangerous, illegal trespassing”.

“In the wake of recent events, in particular those of Charlottesville—where the assembled hordes of white supremacists and neo-Nazis chanted ‘You will not replace us’ and ‘Jews will not replace us’ in a grotesque response to LaBeouf, Rönkkö & Turner’s artwork—the piece’s enduring public show of resistance is more vital than ever,” the artists said.

In a statement, Le Lieu Unique said He Will Not Divide Us has been “censored through acts of violence and abuse, even though it promotes unity and cohesion”. They added: “For us it feels like this work deserves a special attention in our current political, economical and social context, where artists are often prevented from expressing their political stance.”