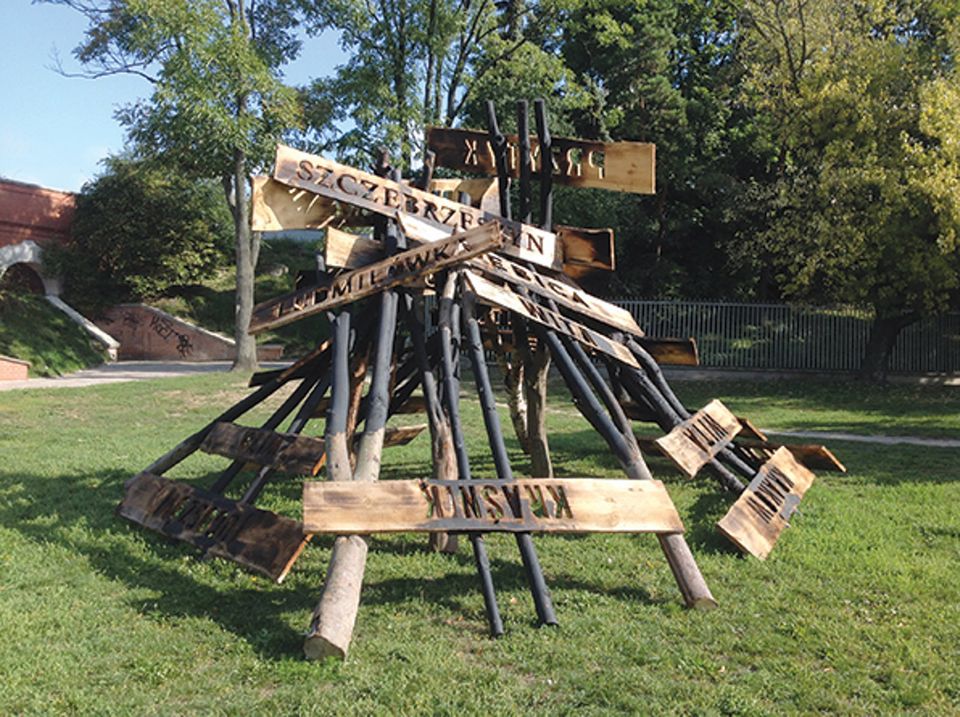 The art historian Tomasz Kitliński, who has spent years championing intellectual freedom and cultural expression in Poland, is the subject of a defamation lawsuit by Przemysław Czarnek, the Lublin region’s governor and an incoming member of Polish parliament. According to the country’s penal code, Kitliński could face a two-year maximum prison sentence if found guilty of slandering a public official.

Kitliński commissioned the artist Dorota Nieznalska to create a work for Open City Festival, which he curated in Lublin this autumn. Nieznalska’s installation Judenfrei–a Nazi term for areas “cleansed” of Jews–marked the sites of pogroms in the city. In 2018, Polish parliament outlawed blaming Poland for any crimes committed during the Holocaust.

Czarnek appeared on state television on 4 October, dismissing Judenfrei as anti-Polish and demanding the work’s removal. But Kitliński kept the installation in place. Soon after the exhibition ended on 11 October, Lublin’s Marie Curie-Skłodowska University awarded Czarnek an honorary medal. Kitliński, who lectures at the school, posted a protest letter online that included the line, “The governor of Lublin Region prides himself in offending Ukranians, Muslims, the LGBT community and women, for whom he sees no social role other than the reproduction of children.”

Academics from across Europe and the US have come to Kitliński’s defence, including Irena Grudzińska Gross, recently retired from Princeton University, Sarah Wilson, lecturer at London’s Courtauld Institute of Art, and Los Angeles-based artist Simone Gad. All have signed a petition in support of the curator.

In early November, a religious broadcast programme, Radio Maryja, mentioned Kitliński’s name every hour on the hour, calling the academic anti-Polish. The radio station’s programming has long faced criticism from the Anti-Defamation League and even the Catholic Church.

“Something is rotten in the state of Poland,” Kitliński says. “I’ve been made a scapegoat for all progressive causes that the far-right despise, and feel personally threatened. By accusing me they intend to send a signal of intolerance to the population at large. This represents an attempt to close down free speech and open discourse on human rights.”

Kitliński plans to fight the lawsuit on free speech grounds guaranteed by Article 54 of the Polish Constitution. He is backed by Citizens of Poland, an informal civic movement opposed to the ruling party. Their hope is that a prosecutor dismisses Czarnek’s claims as baseless. “What’s happening to me is also a threat to the Polish art world,” Kitliński says. “Our tradition here of critical art will be threatened, punished, and destroyed.”